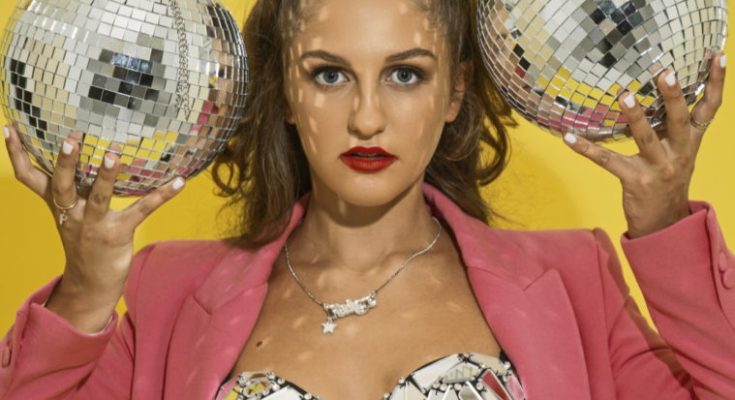 After releasing her debut EP at the end of July, Xenomania’s latest signing Paige Cavell recently dropped her latest single Figure It Out.  The EP and single showed a slight shift from her debut vocal feature on Xenomania’s Predators & Monsters, but both showcased a singer and songwriter who can skillfully adapt her musical style, vocal skills and songwriting talents.

Who is Paige Cavell?

Paige Cavell released her EP Figure It Out in July.  The title track was released as a single recently.  “The title track was an idea I sang a few years ago down at Xenomania and as soon as I sang it I connected with it and I just couldn’t get it out of my head. At that point it was the bare bones of the song, I ended up lyric-ing the majority of it and another young talented artist/songwriter wrote the melody. Tug Of War and Vibe (Like We Used To) were songs I wrote on my own so lots of the recording for it was done at home in my bedroom (perks of modern technology!) I wrote the majority of both of these songs a few years ago whilst going through a break up and then put the finishing touches to them earlier this year. I always like to write from personal experience so everything I go through, I try to remember or write down to hopefully one day use these feelings to inspire a song” she tells us.

Her love of music and performing developed at an early stage.  “I came off stage at 4 years old and said ‘Mum, I loved it when everyone clapped’ and that pretty much sums it up to this day. I enjoy making people feel something, I love to entertain, whether that be cracking jokes, dancing, acting or singing. Without sounding extremely corny, I can’t imagine my life without music. I always think how different the world would be without it, music gets me through pretty much everything, it’s like medicine for the soul. On a day to day basis, I wouldn’t be able to workout the way that I do – a killer workout playlist is the only thing that keeps me going!

Accompanying the EP and title track single, Paige Cavell has released a video to Figure It Out, which saw her shoot the video in London and LA before deciding on a different approach.  “We actually shot the video twice before the one we ended up releasing – once in London and once in LA. I loved elements of both of them but overall they just didn’t work for different reasons. So we went back to basics and decided to do a live performance type video which I really enjoyed! I asked two friends that I met on my degree course at ACM to be in the video and it was great to reunite with them as I hadn’t seen them since I graduated two years ago. I like to make videos look as realistic as possible in terms of lip sync so I always sing along to the track on video shoots. After 5 hours of filming and singing over a band, I totally lost my voice. Because it wasn’t truly live we did about three takes before we realised someone had forgotten to plug their instrument in… Mentioning no names, but maybe it was the guitarist. It was a really fun day.”

After featuring on Xenomania’s Predators & Monsters, her sound took a slight turn with her EP, moving more towards the pop sphere.  But nothing’s set in stone, she tells us, and she’s open to embracing all genres.  “My sound is something that I still haven’t worked out and to be honest never want to” she openly comments, “I connect more with the feeling than the genre or the sound. If I want to sing something, I’ll sing it, if it makes me feel something, I’ll sing it. I don’t like this idea of having to stay in your lane and stick to a certain “sound”. I love artists that change it up, it keeps things interesting. I want to be an artist that is always evolving and staying true to what I’m going through and feeling in that time in my life.

The EP itself draws on a diverse variety of music which she was exposed to from an early age.  Growing up as the youngest in her home, she heard many different artists, genres and feels laughing that it’s “all mixed up in my head somewhere … I have taken different things from so many different artists it’s a little bit of a pick ‘n’ mix!”

Paige Cavell has been writing since she was 11 years old.  And much like her exposure to different sounds, she has also embraced different styles of writing.  “When I was younger I used to write just to get my feelings out, as a coping mechanism. When I was 11, I wrote my first song on the piano, after my Great Auntie passed away. I continued to write songs on the piano up until the age of 16, I still write the occasional one this way but not as much. When I started working with Xenomania I was thrown into unknown territory as they write so differently. They write as many ideas as they can over a backing track, whereas I was more used to telling a story in the traditional verse/pre-chorus/chorus/bridge way sat at a piano. It took me a while to find my groove but I feel every day I’m getting better and better at writing and I enjoy it so much, it’s very fulfilling.”

What is next for Paige Cavell?

There’s no denying her enthusiasm for music and performing.  “I can’t wait to keep releasing new material and keep evolving as an artist” she enthuses. “I really love performing so hopefully I can start doing live gigs soon! I love hearing from people that enjoy my music, yesterday I got a message from a girl in Australia who said “Figure It Out was a real bop”. It amazes me how music travels round the globe and brings people together. If someone messages me I always make sure I reply and strike up a conversation with them as it really means a lot to me that they have taken the time to engage with me and my music.”

Figure It Out is just the start for her.  “Obviously I am in the early stages of my career” she says, “so it just felt good to take the first step on a very long road. I feel really proud.”

Where can you find out more about Paige Cavell?