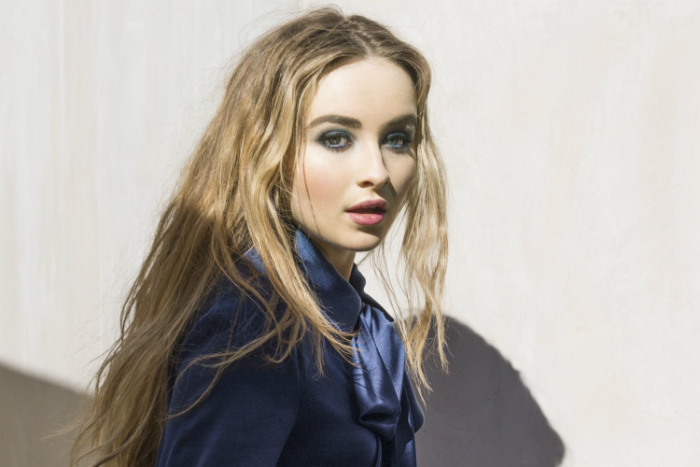 I turn a corner backstage at Manchester Arena on my way to meet Sabrina Carpenter.  There she is, sat casually on the floor with a group of fellow singers, musicians and crew.  She’s playing the guitar, singing along.  “Come, join us” she beckons.  I’m not altogether certain that there’s a person on the planet who should suffer my singing.

She’s incredibly relaxed for somebody who in just a few hours will be going on stage in front of near 15,000.  But then this is nothing new to her.  Sabrina Carpenter has been in the music industry for a few years now – she’s practically grown up in it; she’s spent plenty of time on the road, touring and gigging around the US, Europe and the rest of the world; add in her acting career and it’s no surprise to find her confident and unphased. 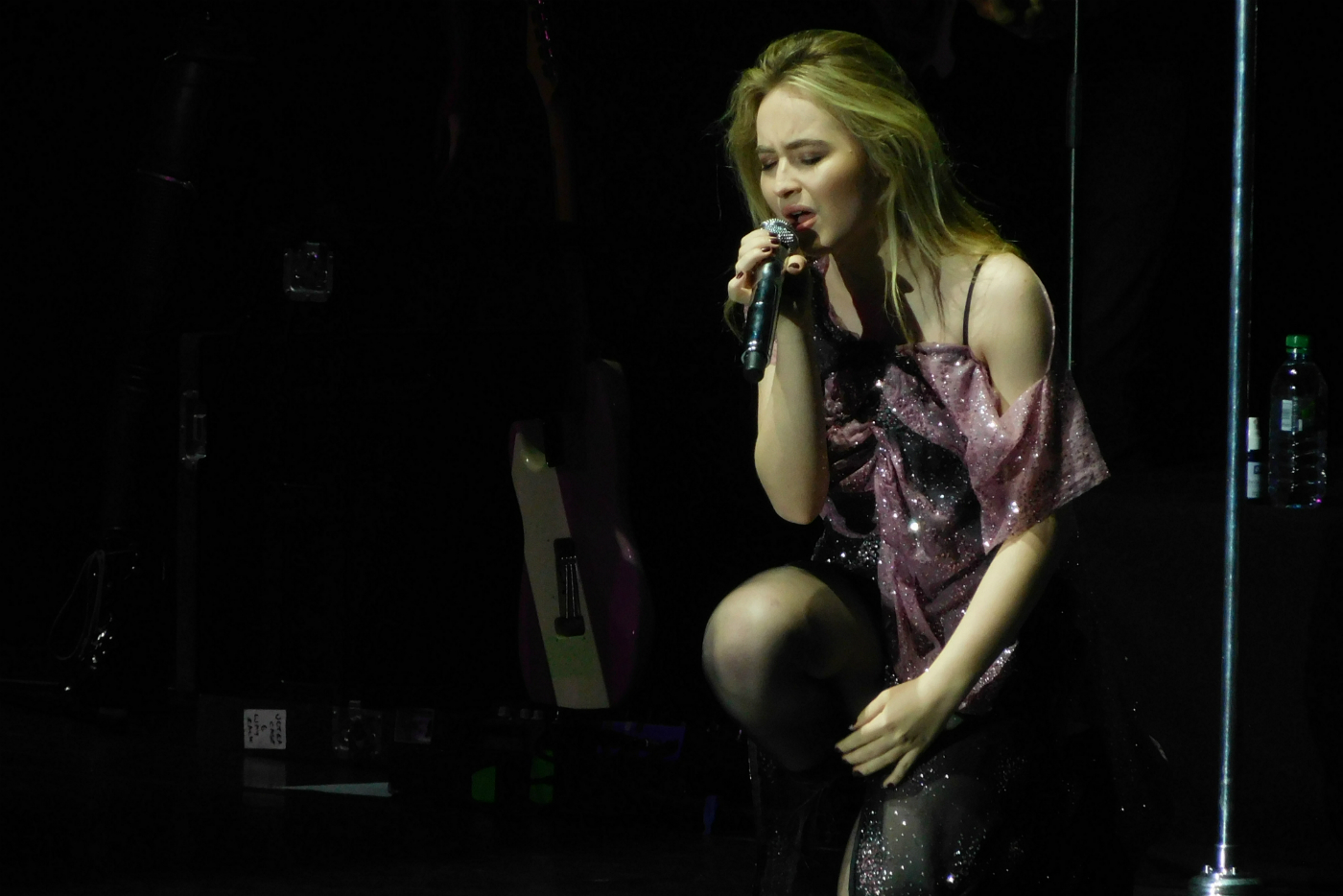 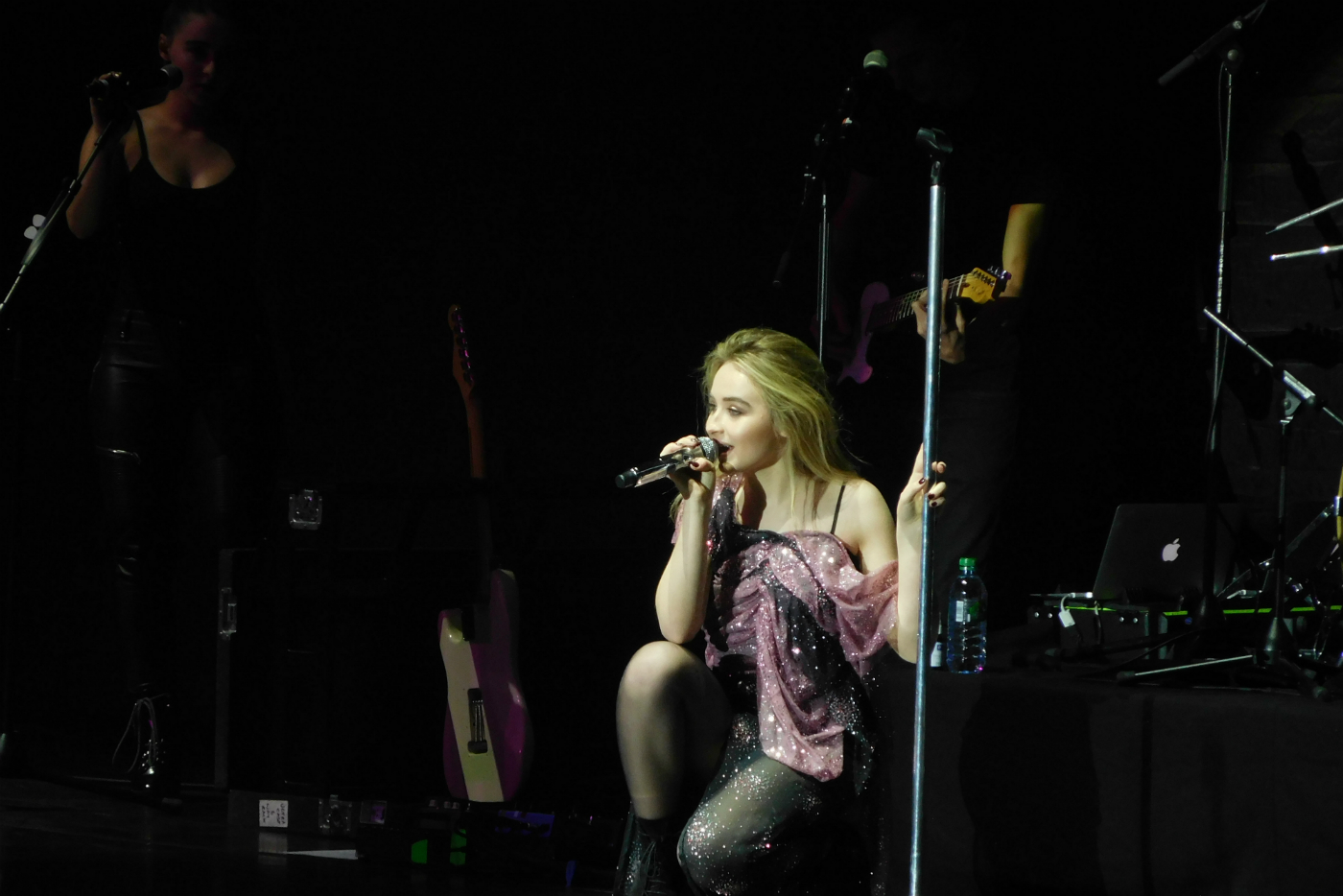 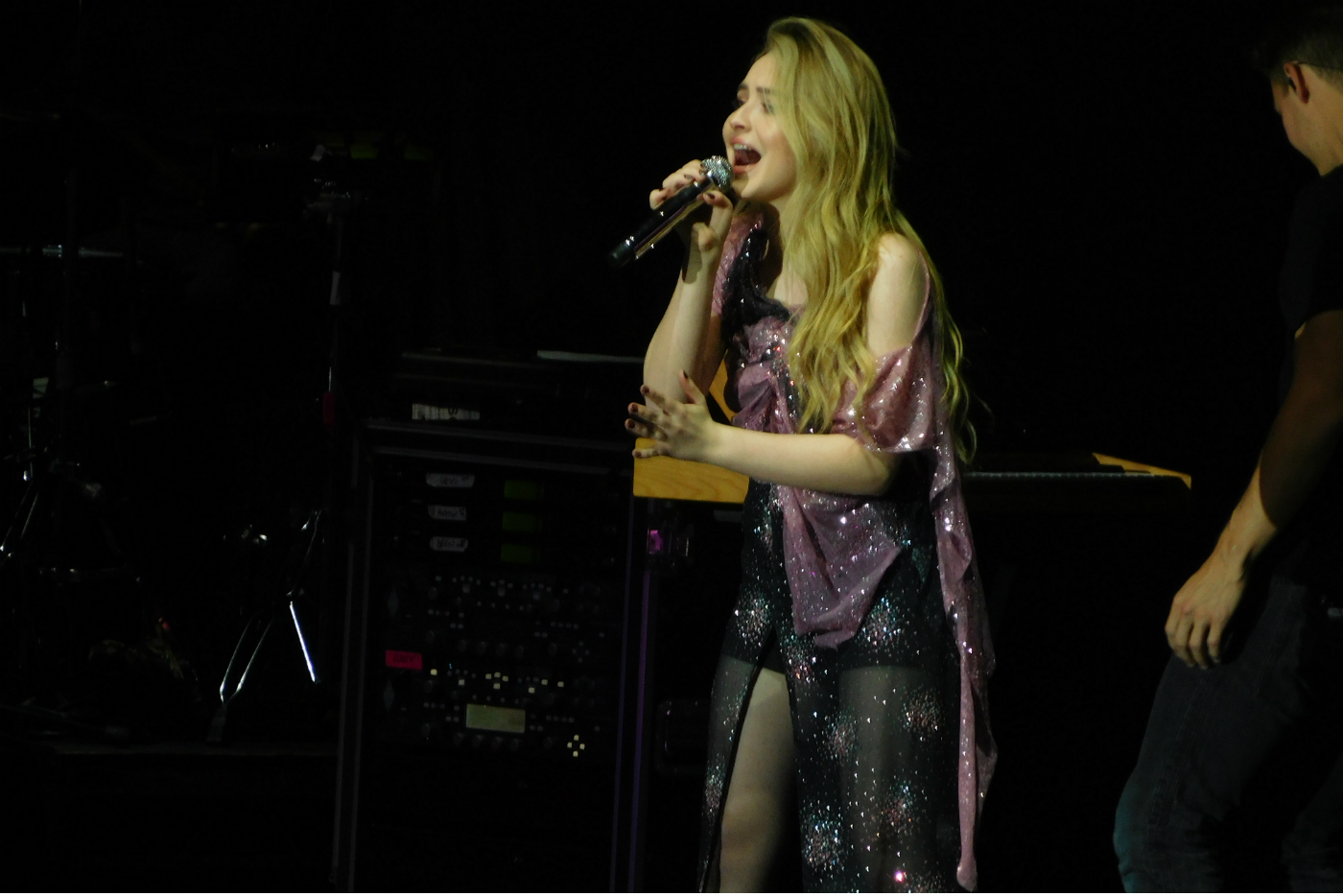 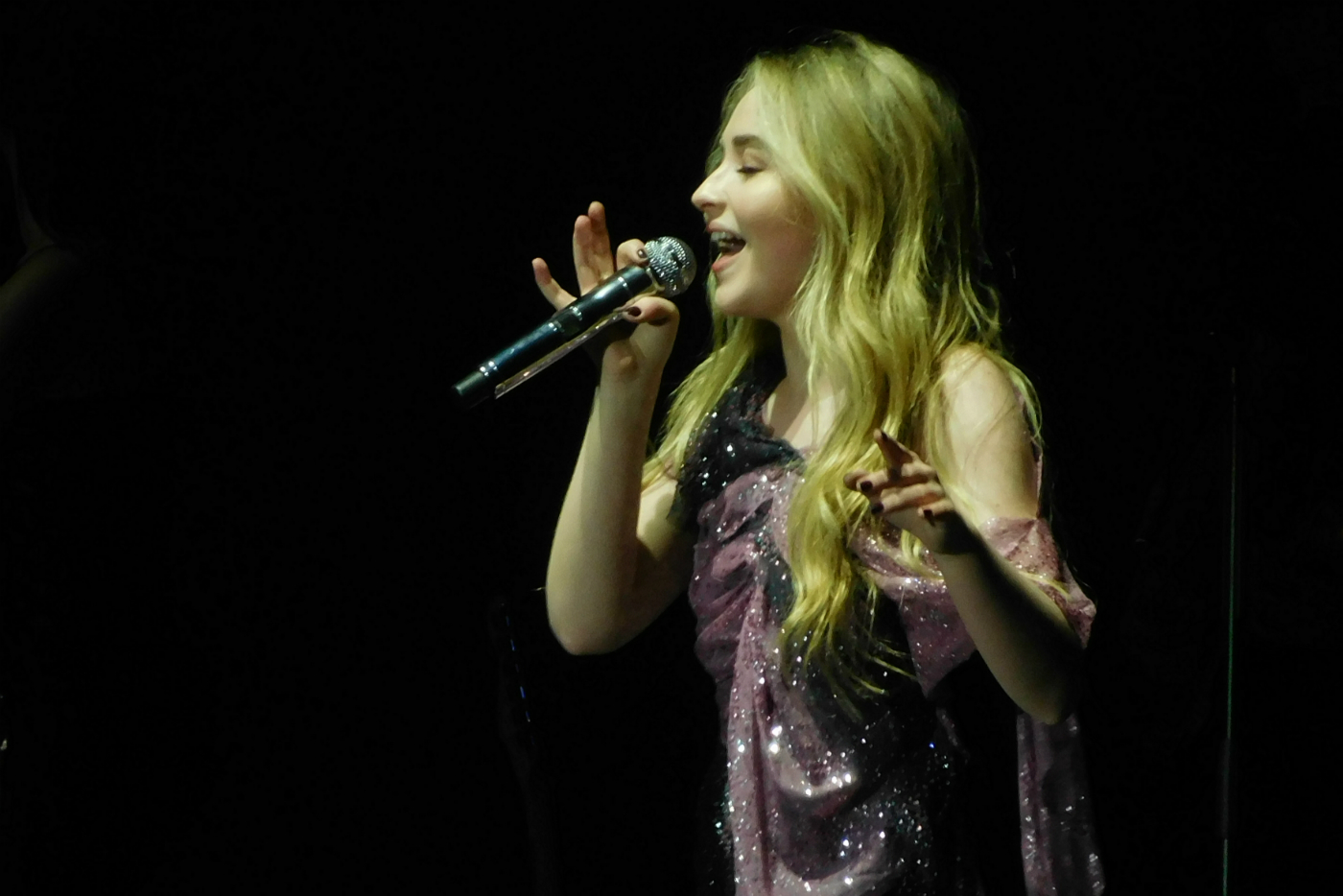 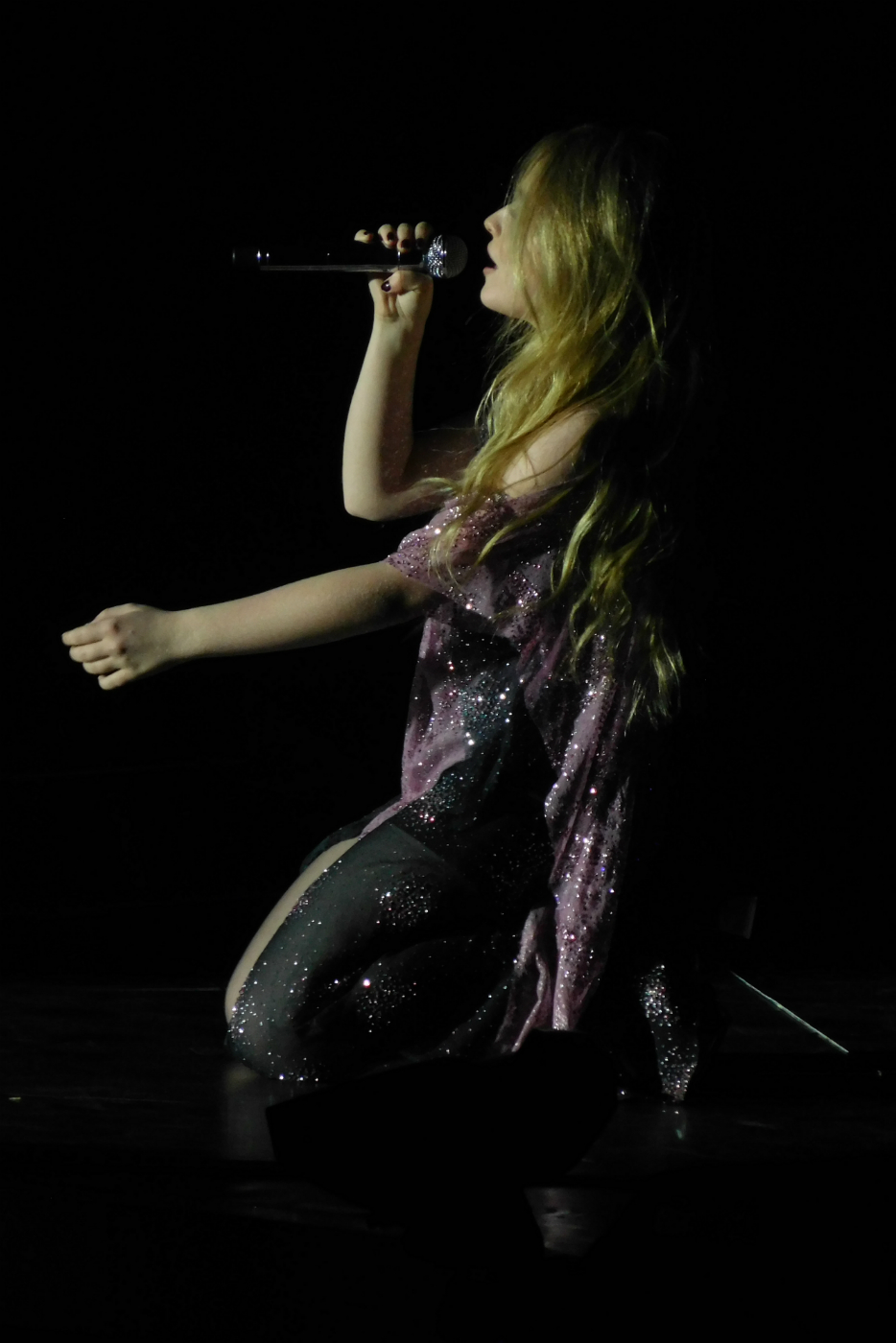 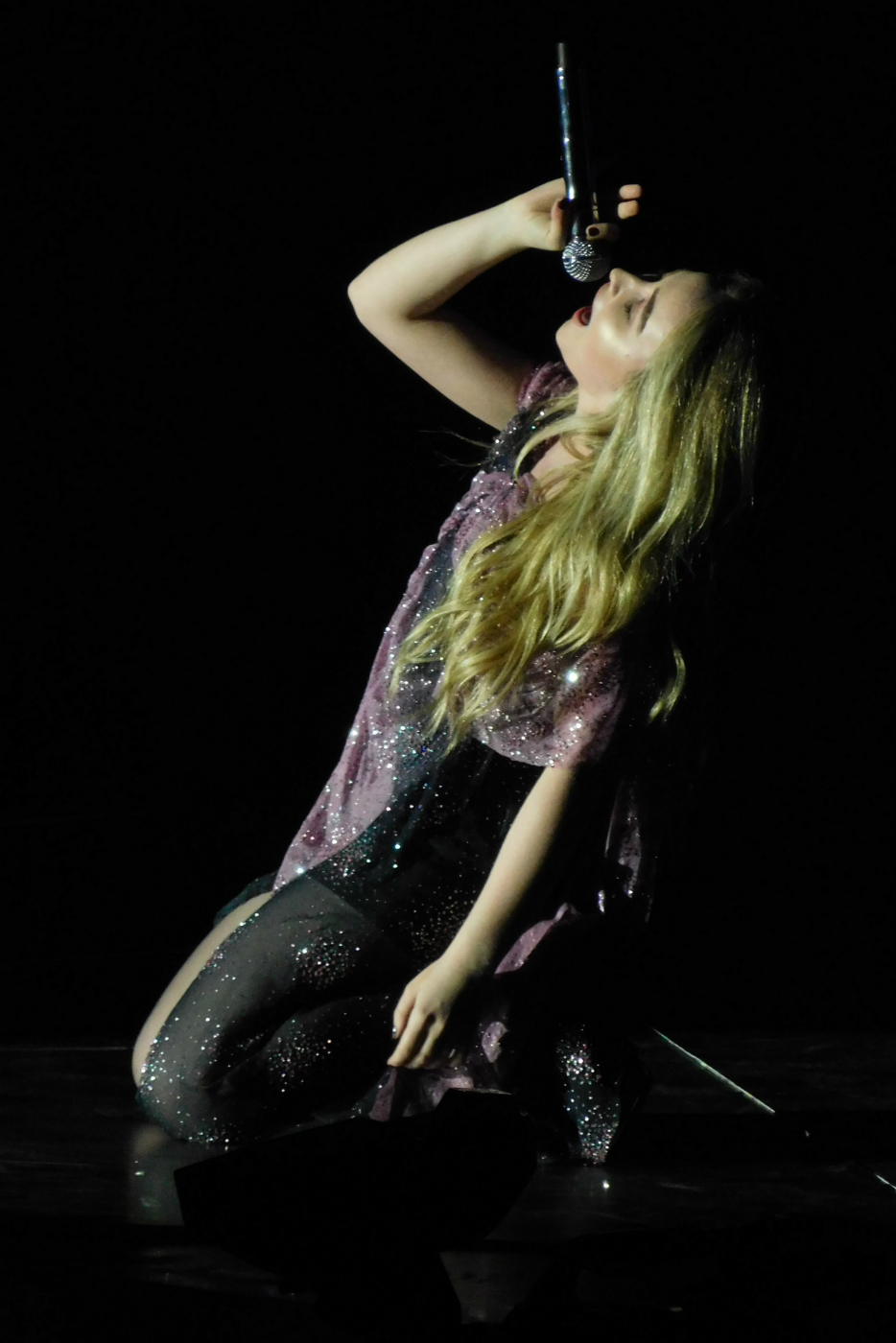 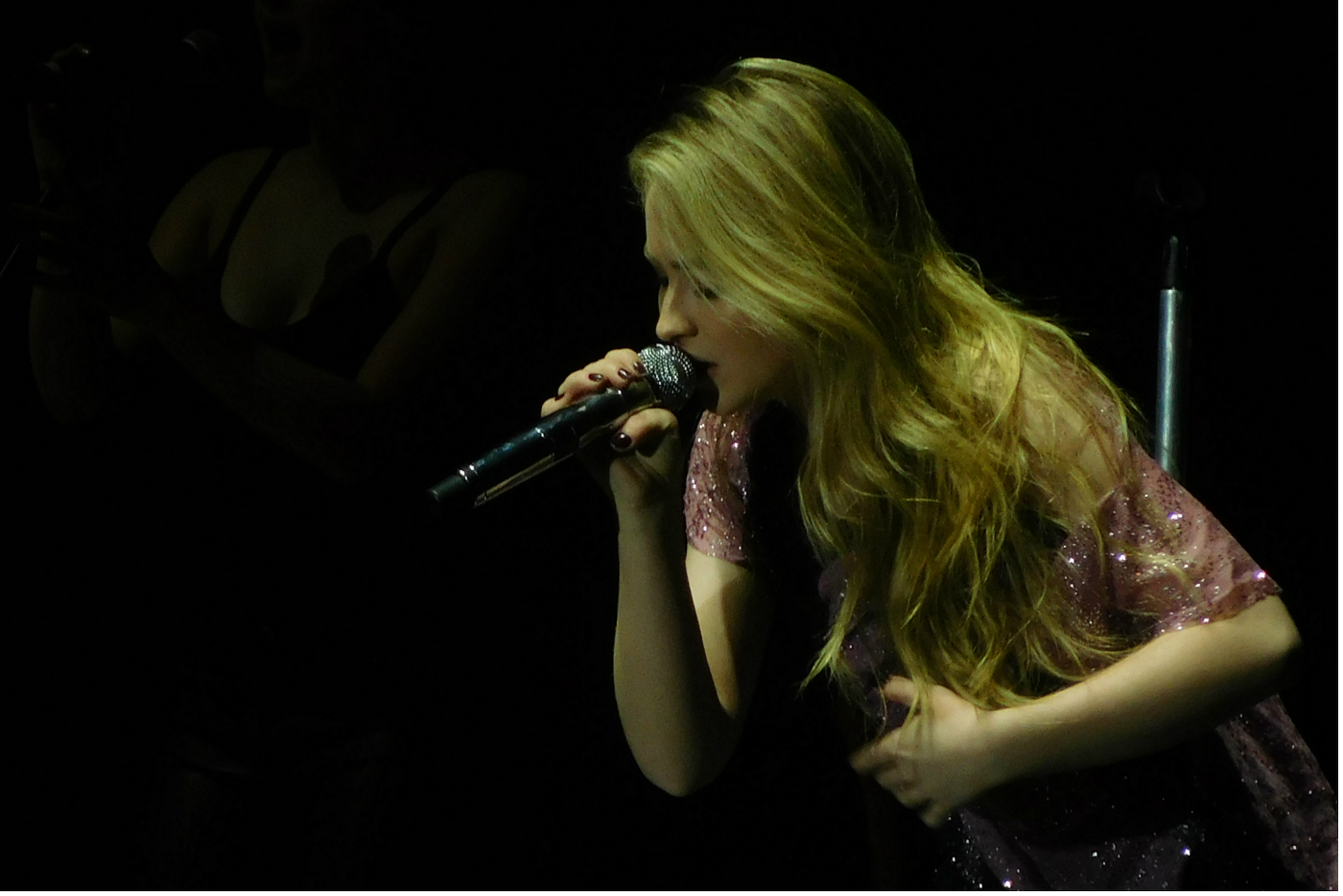 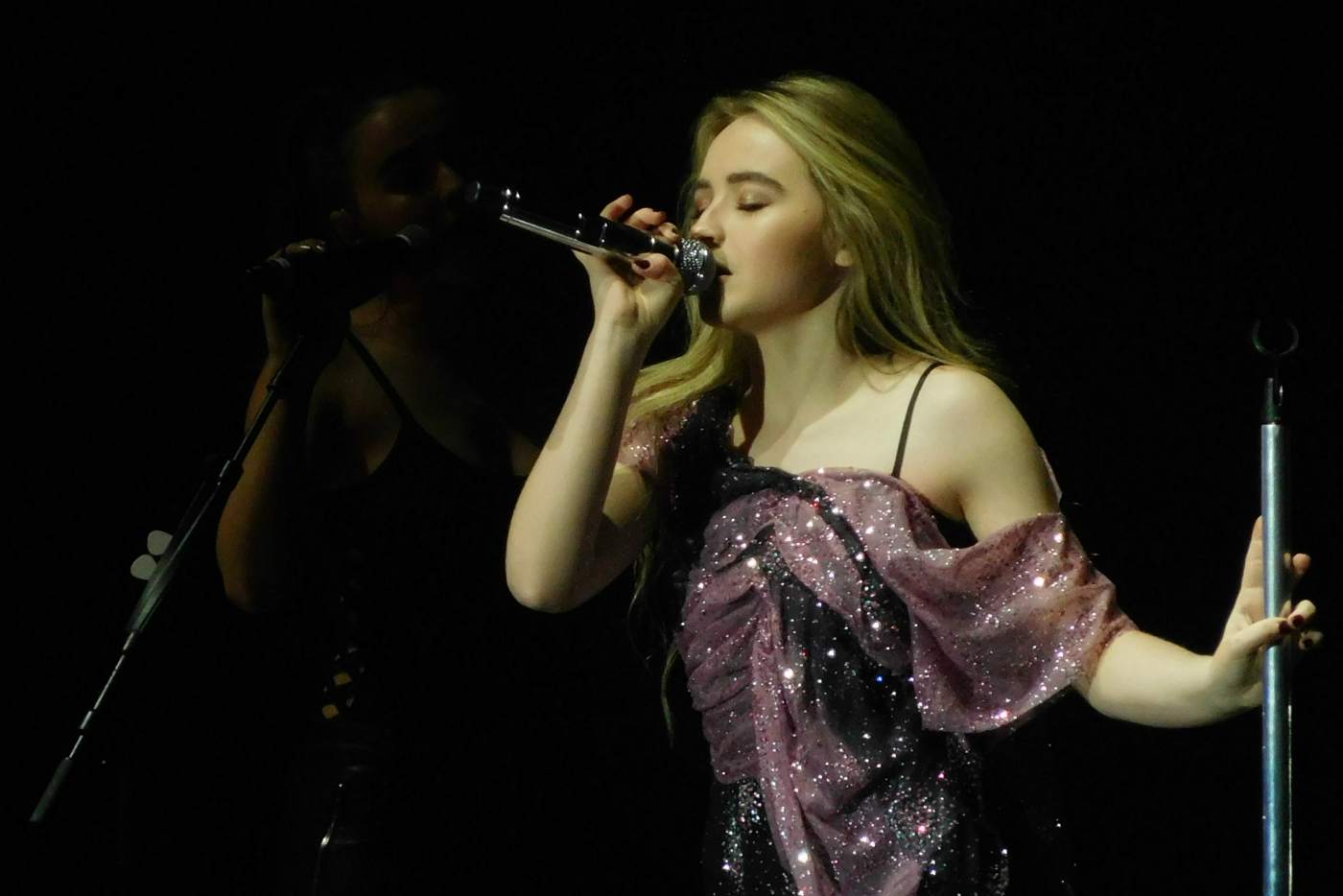 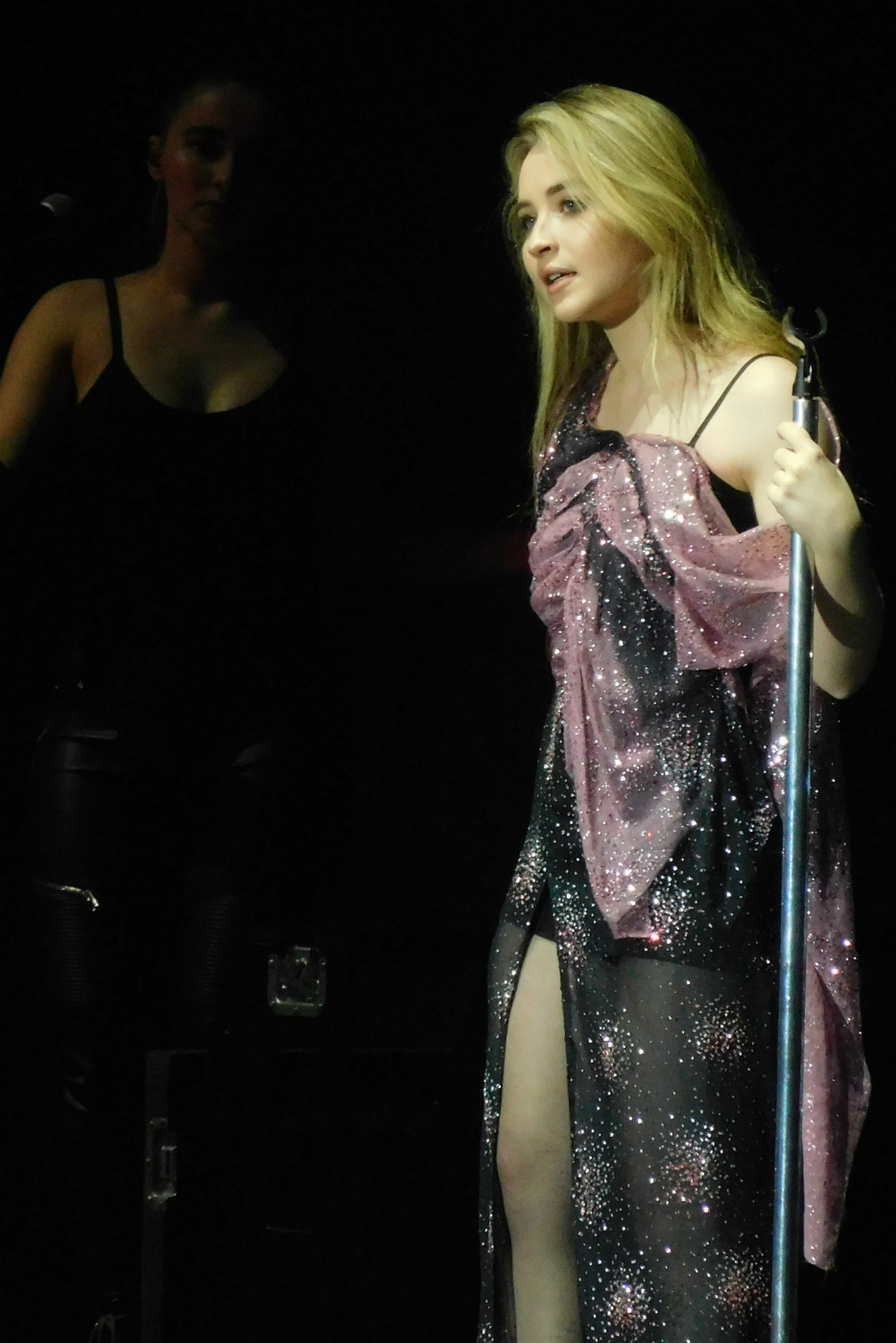 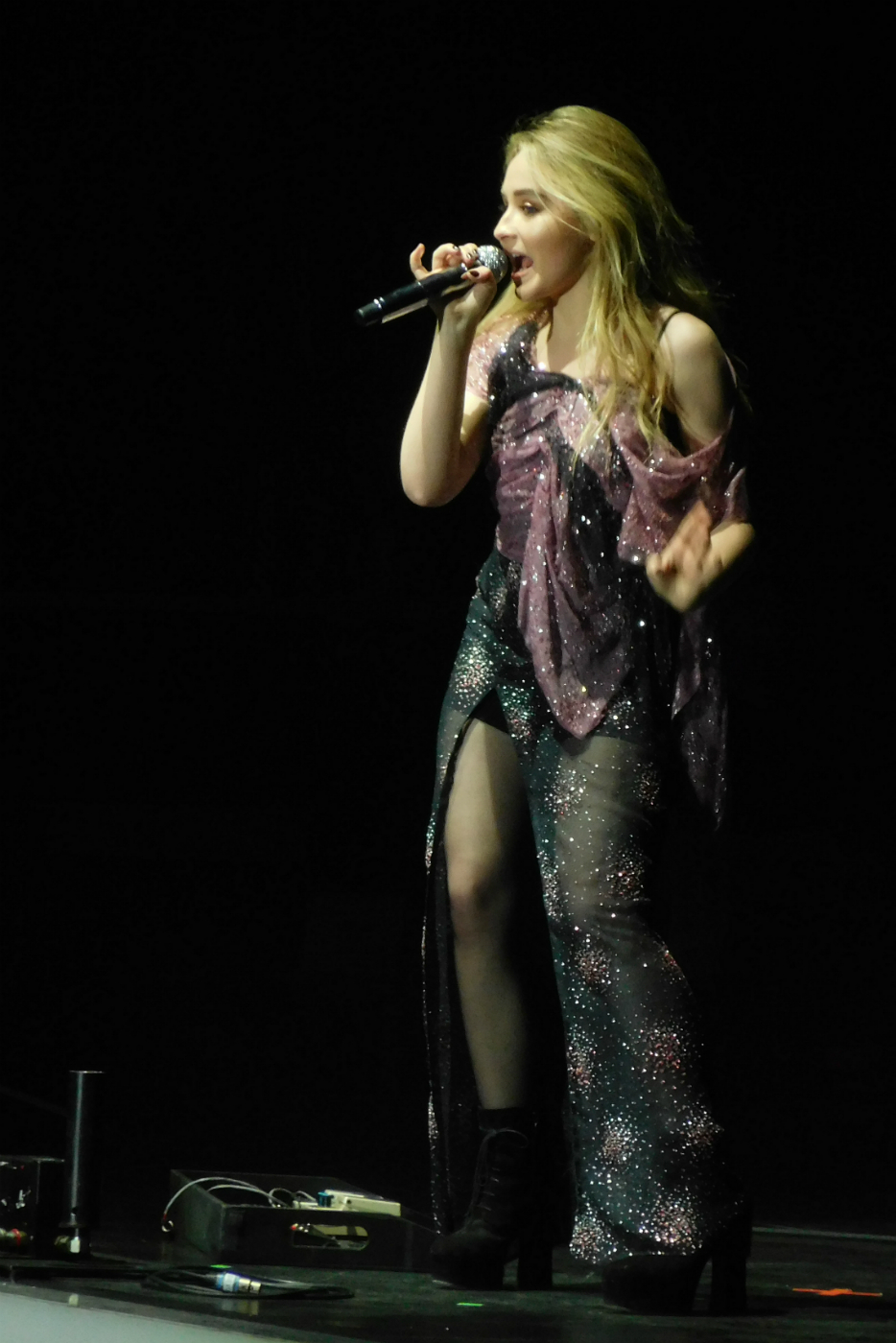 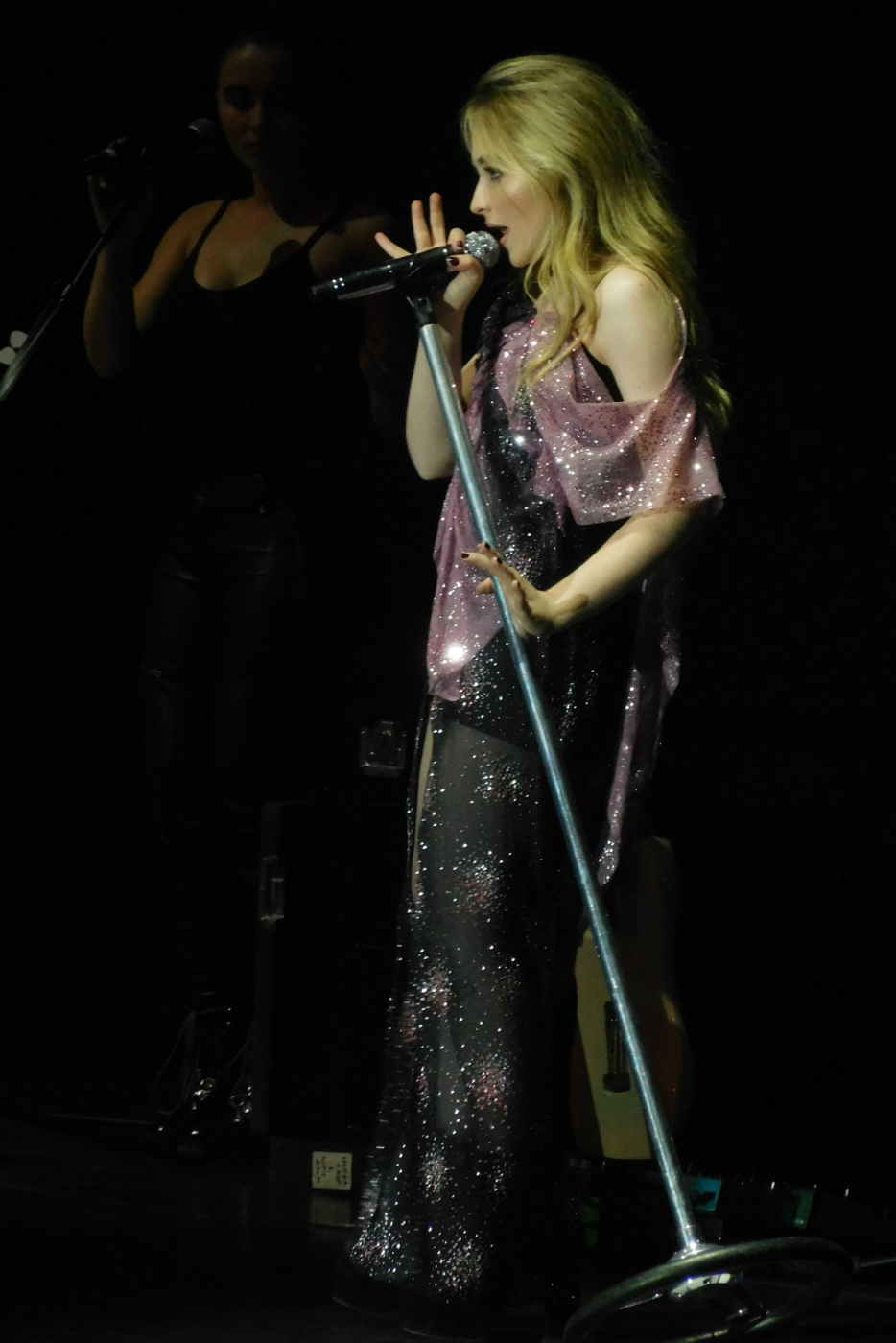 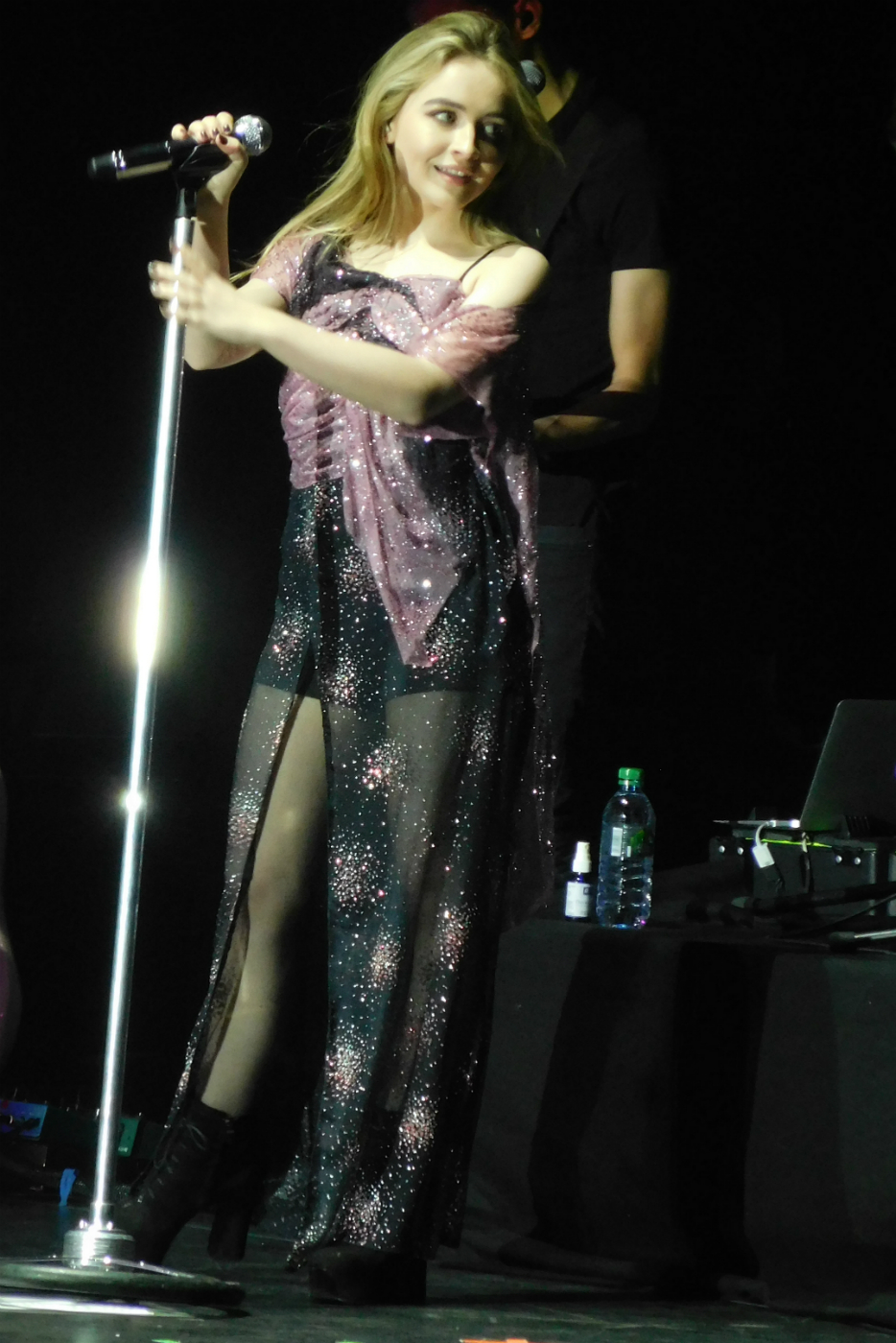 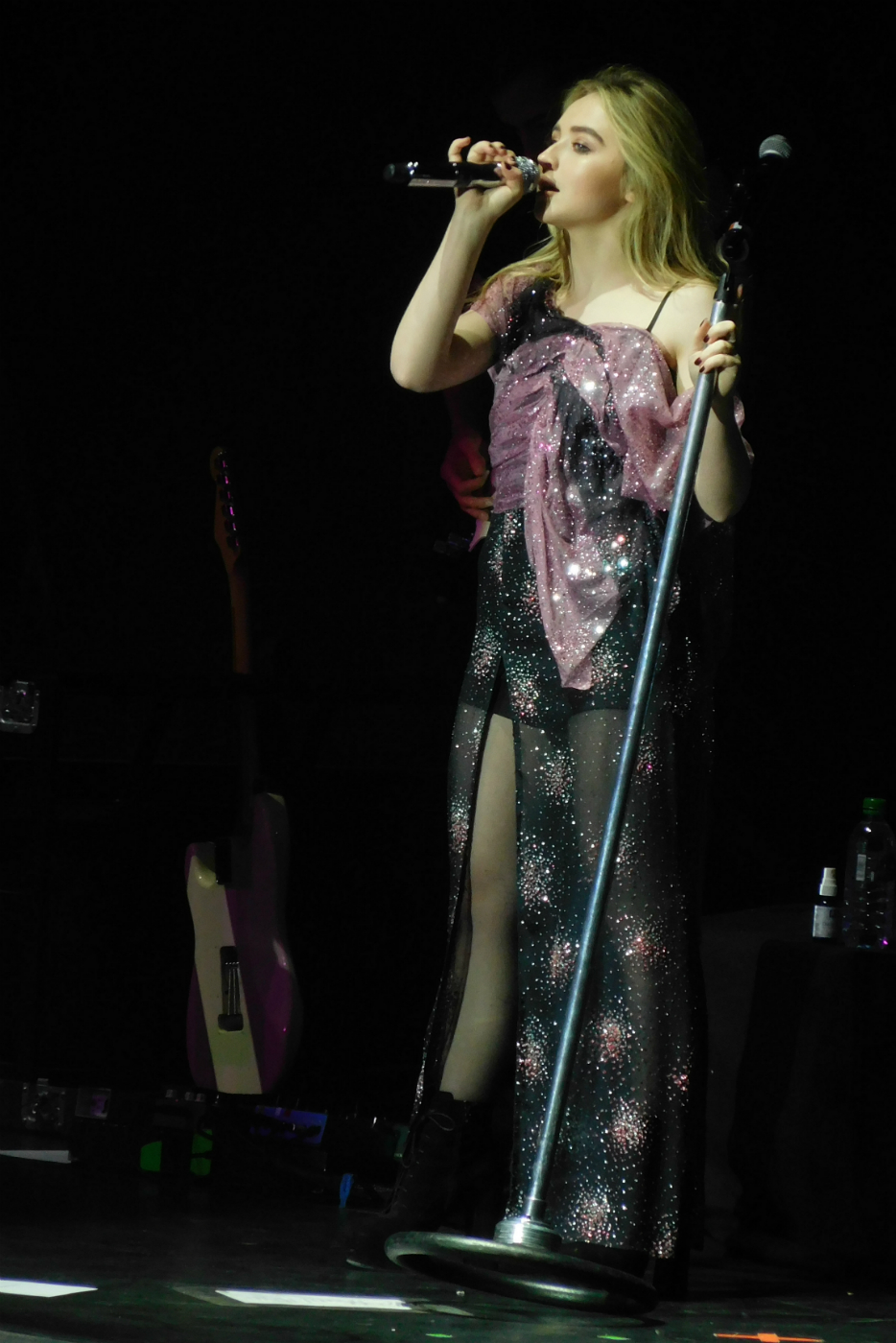 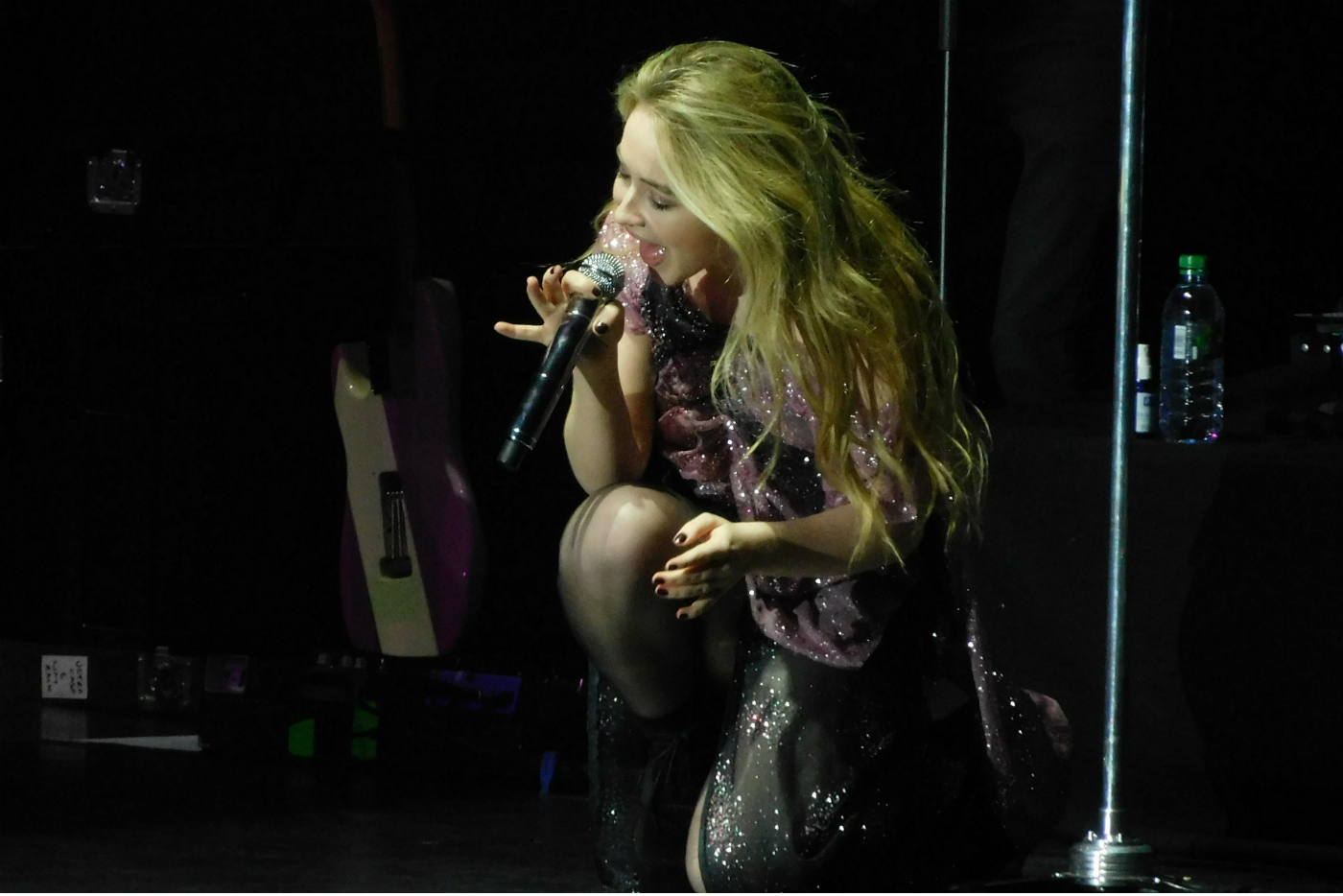 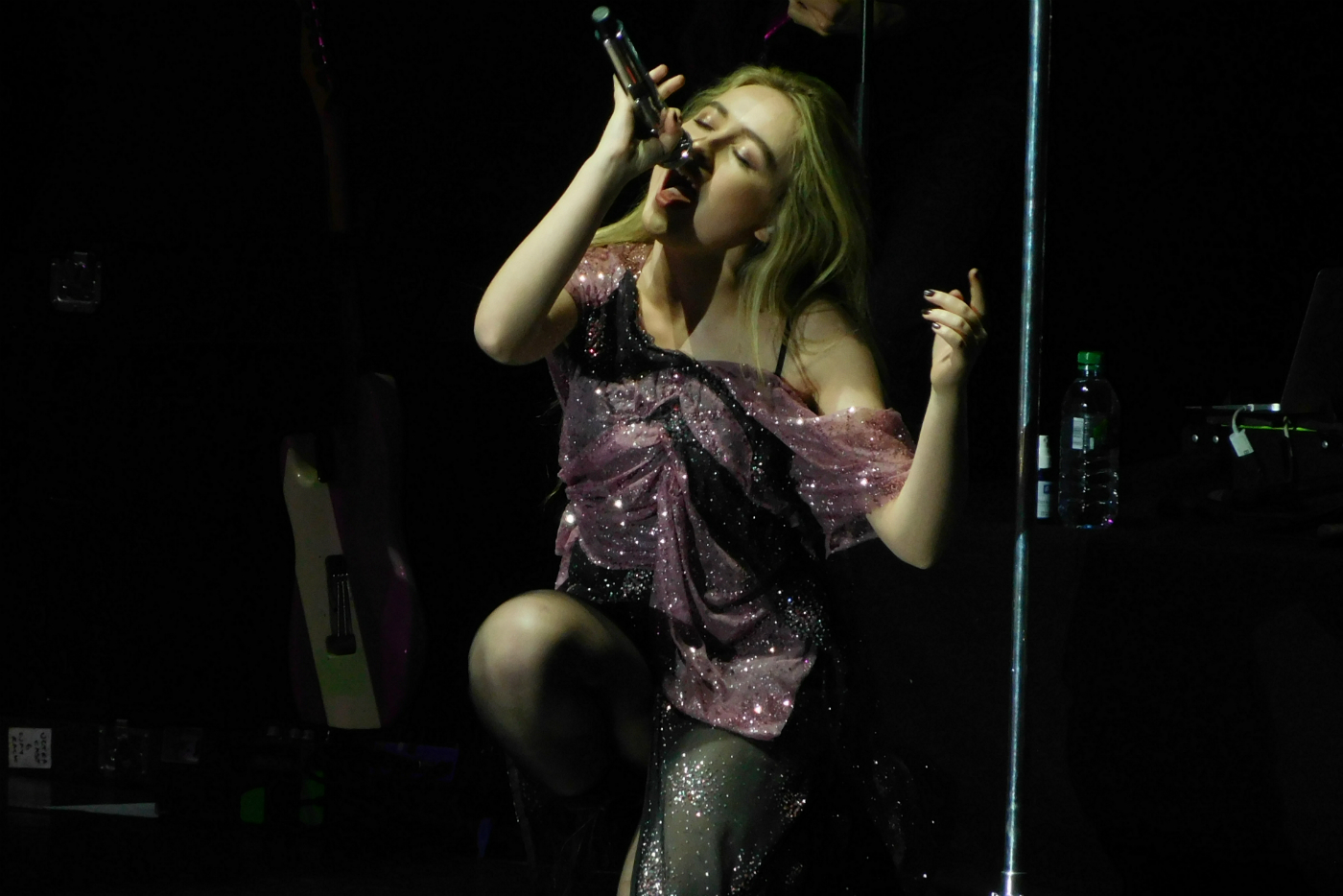 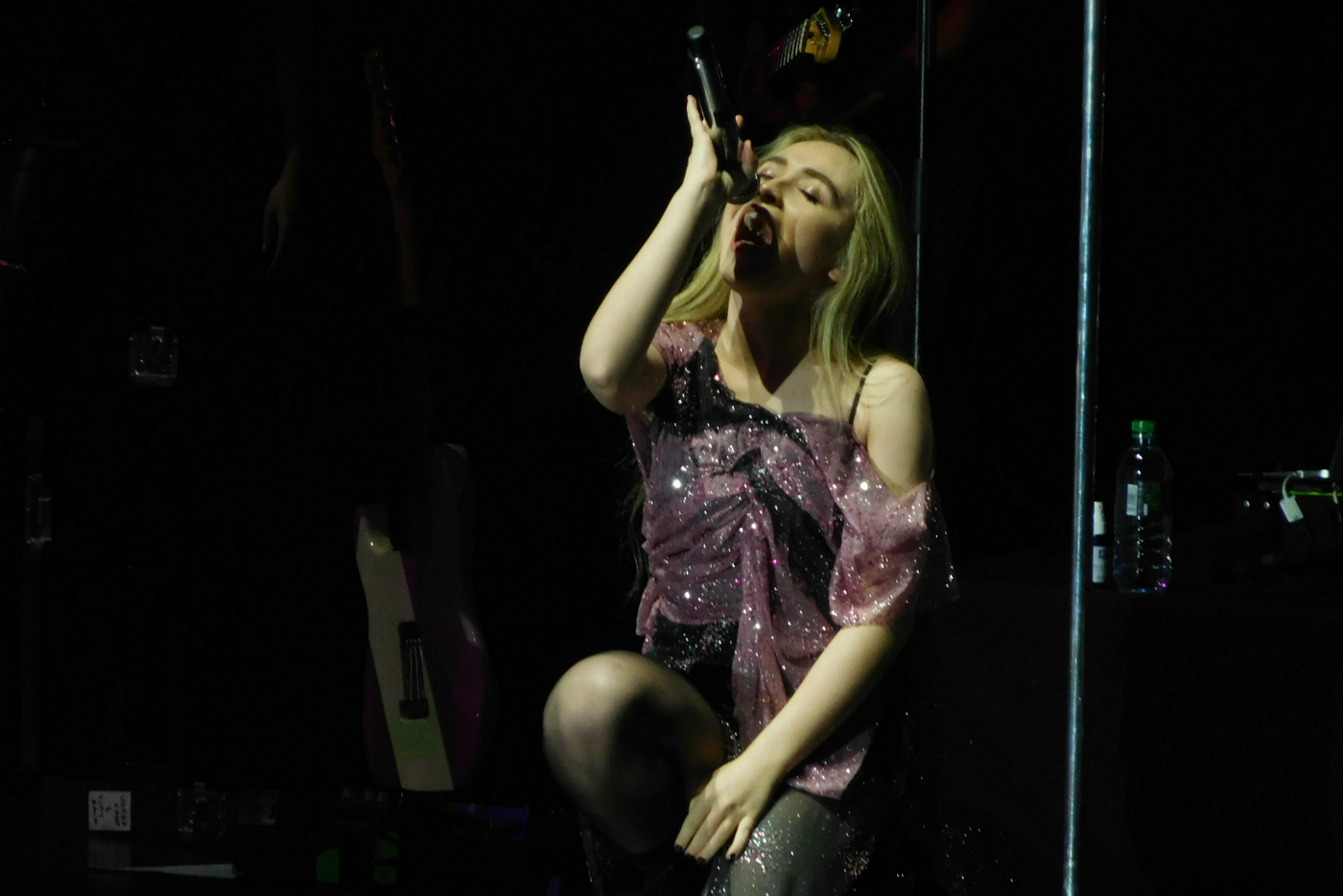 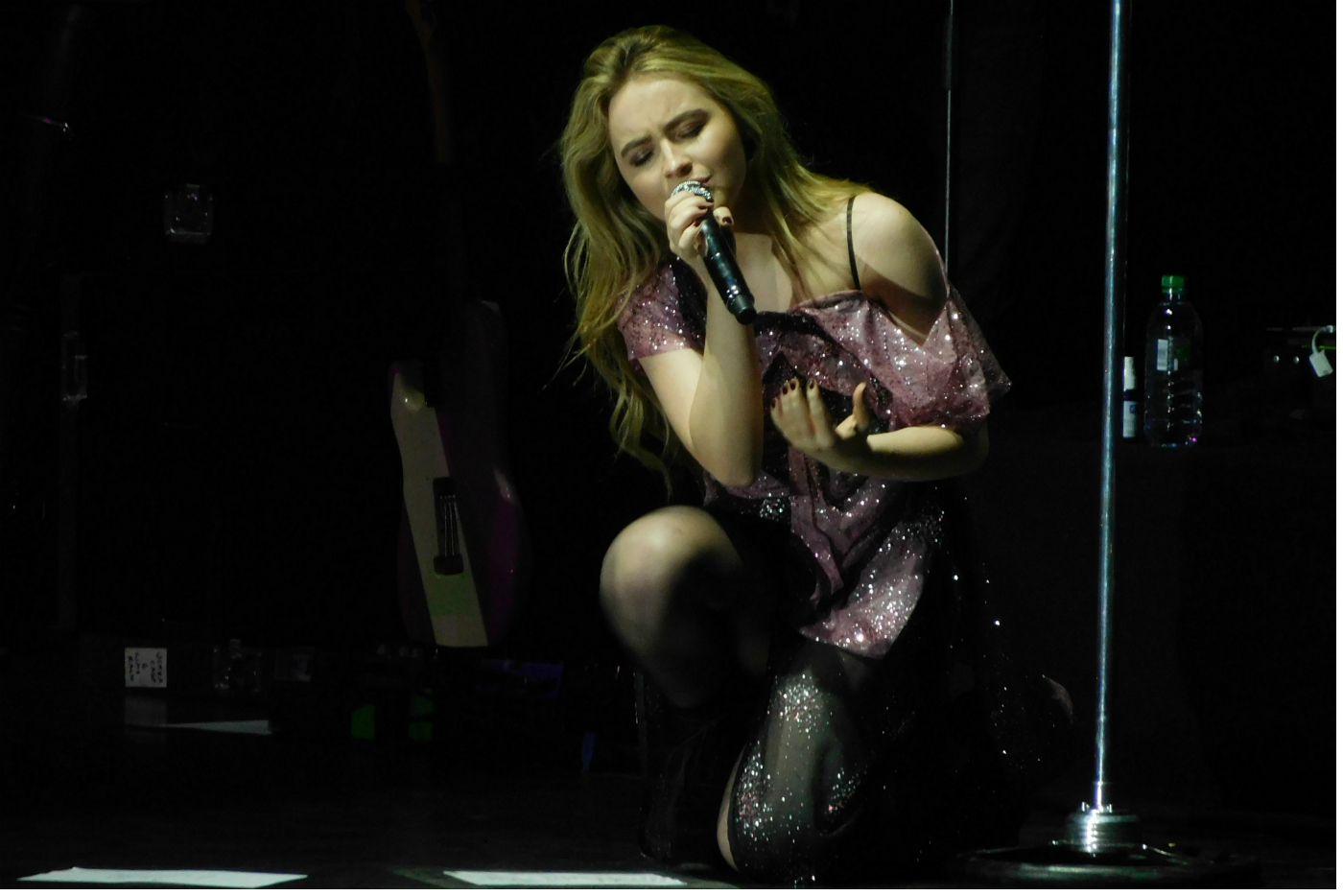 We make our way to an area just off stage, sound check is going on in the background and I ask her about her time on the road (she still has the best part of another three months of touring to go).  She explains that she is on tour “literally until the end of August”.  “I’ve kind of been on the road since October of last year, when i started my first tour” she continues, “so it’s kind of been like my first whole year of touring … the experience of just being everywhere.”  Spending so much time on the road is something which many artists relish – the chance to get out there, meet fans, see new places; others not so much – the time spent sat on a tour bus, in airports (or for those just starting out the endless hours in the back of a van going up and down the motorway).  Sabrina admits that she tries to put it out of her mind “I just try not to think about it.  Just no!” she laughs.  I joke that it probably doesn’t help when people like myself bring it up.  “Ha ha.  No.  It’s funny because if you think about it that’s when you think ‘God, I’m not off the road until the end of August’ but if I don’t think about it then I’m just performing on stage every night and I get to do really amazing shows like this.”  Like everything else we discuss – it’s clear that Sabrina Carpenter looks to the positives and appreciates what she does.

We move on to Sabrina’s latest album, Evolution.  When first listening to the album I’m struck by the variety of influences – there’s pop, soul, a little jazz, some bass.  “That was done purposefully when I was writing it” she explains.  “It’s was kind of an experimental process of going into the studio and thinking ‘let’s try this’ one day and ‘let’s see what we can do with this.  For some reason they all had a cohesive sound that could come together as an album.  I feel like a lot of different kind of lovers of music can listen to this album and find something that they like, because there are a lot of different styles.”  And it’s an honest, personal album  too.  “It was very personal” she continues  “I think the great thing about the album is that it came so easily.  It didn’t feel like I had to look for myself, that I had to find a way to change.  I just did.  And in the sessions the songs came within a few hours and very simply.  Everything just felt honest and truthful whether it was like me going in to the studio and having an experience going on in my life that I needed to write about or just something that wrote itself or something that I needed or that my audience probably needs as well.”

So, who does Sabrina Carpenter find herself influenced by? “I have a lot (of musical influences)” she confirms, explaining why the album has such a variety of styles fused together.  “They change over the years.  I think with the last album and going in to this album I’ve been influenced by so many different styles.  There’s a lot of soul with Rihanna and Beyonce and those strong voices like Christina Aguilera.  And then I’ve always loved simpler songs like The Beatles – I’ve been influenced by them growing up my whole life; then there’s a lot of indie rock that I listen to.  I’ve always just wanted to have this air of confidence in my music without having to say the exact words.  I just want it to sound like I’m comfortable in what I’m singing and that’s what I strive for in every song.”

I think we might have created a monster because now I just want to be a part of everything!

The now-18 year old singer found herself far more involved in the creative process of this album.  It was something she relished.  So did she find this extra pressure stressful?  “No, I think we might have created a monster because now I just want to be a part of everything!” she emphatically declares.  “But I think that’s the best way to do it if you’re planning on doing it for the rest of your life – it should be tailored to you and it should make you feel that you are conveying the stories you want to tell properly.  I think so much of it is that I’ve learned to listen to so many people and collaborate on ideas and that has made me a more creative person overall.  I like it much better having a personal connection than just singing something.”

Turning back to touring, we discuss what she has in store for her fans.  “This tour is different from my first tour” she notes.  “My first tour was very intimate and now we’re so lucky that they sold out that tour and we’re getting to make it a bit more of a show and that means that the people who didn’t make it first time are going to get to hear the songs from Evolution and I’m going to throw lots of surprises in there for them because I want them to feel excited.”

So much of being on stage and playing music is telling stories and if you portray that with emotion, which I get from acting, then it makes you a better performer

Spending so much time on the road, and so much time writing and recording (she admits “In my mind new stuff is always on its way!”) you would think that the emphasis is firmly on singing.  Her acting career has brought her huge success, starring in the huge Disney show Girl Meets World.  So how does she, and can she, keep both going?  For Sabrina Carpenter, it appears that they both blend perfectly.  “It’s so funny, they don’t complete at all” she clarifies.  “Well, they compete for timing, for my schedule.  But they really do balance each other out and help each other.  I think so much of being on stage and playing music is telling stories and if you portray that with emotion, which I get from acting, then it makes you a better performer.  I think when you’re on set so much of it is rhythm and timing – they help each other out in so many ways.  It’s hard to describe and maybe it’s hard to understand if you’re not doing both, but I’ve had so many times where I’ve been on set and I’ve thought “Oh, my knowledge from what I do on stage can help me” and vice versa.”

Just a few days before meeting Sabrina Carpenter, I found myself watching Law and Order: Special Victims Unit.  I did a double take when I spotted a young looking Sabrina on the show.  As I bring this up she laughs.  “Oh, God.  That was my first role ever.  Little baby Sabs!  They put no makeup on me – I was like a tomato!”

As much as she was young when she started acting, she was already taking her first steps towards a singing career long before that.  “I started doing covers on YouTube when I was nine” she points out “so I really had been singing before I booked my first [acting] role when I was eleven or twelve and signed with my label when I was twelve.  They happened to both work out at the same time.  The show [Girl Meets World] did overtake for a while, but luckily I was still writing my first album while I was filming.  I’ve always kind of been doing both so for me it never felt like I have to show people that I’m a singer now, it’s just always been like that.  Both have always been very important to me.  But we’ll see – I might rebel so I’m not going to say that I won’t, but right now I’m fine, I’m very content.”

I get to spend my birthday there and just eat chocolate all day.  It sounds like heaven right?

Shortly after our chat with Sabrina Carpenter, it’s her 18th birthday … and she’s on the road!  But again, she sees the positive – “I’m going to be in Paris, which has been one of my biggest dreams for my entire life and it worked out that I’m playing a show the night after my birthday there so I get to spend my birthday there and just eat chocolate all day.  It sounds like heaven right?”

After the tour, it’s about finding balance, she explains.  “I feel like my schedule is planned for the next three years!  We have a lot coming up in store and it’s about balance, finding what things fit in where.  Right now I’m focused on the tour, but we’ve got so many cool projects lined up after the tour.”  Amongst these new projects is her ambassadorial role with the Ryan Seacrest Foundation which was just announced.  The foundation is dedicated to inspiring youth through entertainment and education., so it is only appropriate that Sabrina is involved.  She beams as I bring this up.  “It’s a passion project which turned into them wanting me to be an ambassador” she enthuses.  “It was such an organic way in which it happened.  I felt very honoured, because I love doing it anyway – I love visiting the kids while I’m on the road.  It kind of takes me away from what I’m doing and makes me realise how lucky I am.  And how lucky I am to have all these amazing people around me every day.  The kids inspire me.  I’m very excited to be working with them more hands on – they are such an incredible group of people.”

But will she return to America a different person?  Her friends apparently think so: “It’s so funny.  My friends back home are like ‘she’s going to come back a changed person” because everybody here swears a little more, you guys are so fun, you know how to party.  In the US it’s a little bit more mellow, so they think I’m going to come back a changed, wild person.”  Will the relaxed, friendly, funny, confident Sabrina Carpenter become ‘wild’ – she answers coyly “I think I will maybe be more of a free spirit.  Perhaps.  We’ll see.”