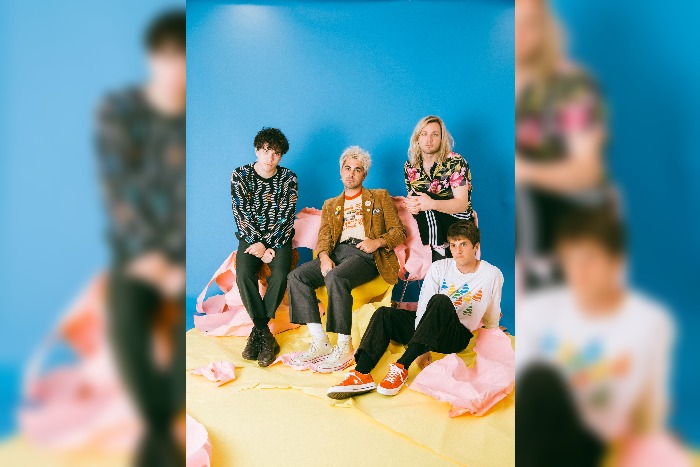 The Manchester gig, supporting Cavetown at the O2 Ritz, comes ahead of a string of US dates for the band.

Hunny released their full-length debut Yes.Yes.Yes.Yes.Yes back in the summer of 2019.  The album, which demonstrates their continuing sonic development marks an endless back-and-forth between heavy-hearted lyrics and bright-and-shiny melodies.  Lovesick confessions at odds with addictively dancey rhythms.  The album is centred on a narrative Jason Yarger (vocals) sums up as “I love you and I want to die.”

Yes.Yes.Yes.Yes.Yes was predominantly written by the California-bred band on acoustic guitar, channelling vulnerability into every line.  It was produced by Grammy Award-winner Garlos de la Garza and came to life around November 2018, the same time as the Woolsey Fire and Camp Fire struck nearly 97,000 acres of land in Southern California – in fact at one stage the band were writing and demoing whilst firefighters were in keyboardist and bassist Kevin Grimmett’s backyard stopping the wild fire from reaching the property.

Hunny spent weeks in the studio embracing their experimental side.  “There was a lot of rabbit-holing and taking our time to find different sounds, especially with the keyboard parts and the synths,” says Yarger who cites Depeche Mode amongst the band’s biggest inspirations on the album.

Formed in 2014, Hunny came up at the same time as various contemporary musicians, skaters, video directors, and other creatives from the same neighbourhood. “There was a house in the Valley that we used to go to parties at, and we all ended up meeting there and eventually playing together,” says Grimmett. After playing their first ​ gig in a garage, Hunny delivered their debut single Cry for Me in January 2015, then self-released the Windows I EP in May 2017.  Soon after signing to Epitaph, Hunny put out their 2018 sophomore EP Windows II, and quickly got to work on their first full-length release, straying from their punk roots and exploring 80s new wave and 90s pop.

When do Hunny support Cavetown at Manchester’s O2 Ritz?