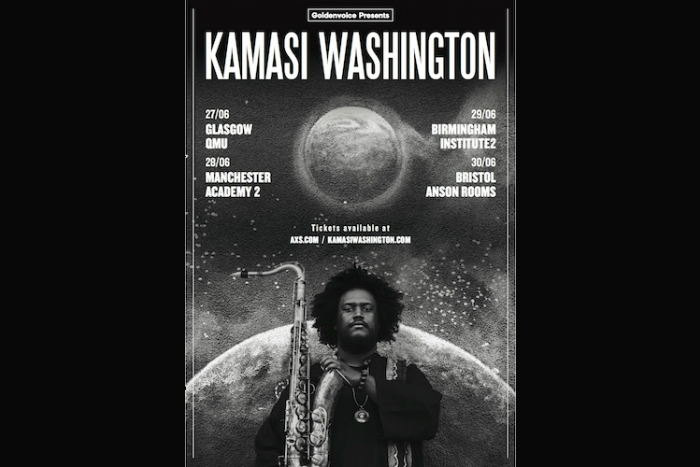 Legendary saxophonist and composer Kamasi Washington is set to appear at Manchester Academy 2 as part of his UK tour, performing material from his critically acclaimed album The Epic with his phenomenal band, The Next Step.

The most talked about US Jazz artist of the moment, jazz fusion figurehead, saxophonist and composer Kamasi Washington will perform at some of the UK’s most prestigious venues through the UK this June, including: Glasgow’s QMU, Manchester’s Academy 2, Birmingham’s Institute 2 and Bristol’s Anson Rooms.

Washington, who comes to the UK this summer to perform multiple shows including a hotly tipped performance at Glastonbury Festival, says he also excited to hit the UK’s regions: “Bummed I couldn’t make it to the Worldwide Awards in UK earlier this year, so I’m very excited to come back to the UK and play these shows with you in the summer. See you all very soon!”

Washington, a saxophone virtuoso, known for playing with the best of the best, which includes collaborations with artists such as: Herbie Hancock, Lauryn Hill, Nas, Snoop Dogg, Chaka Khan and most recently Flying Lotus and Kendrick Lamar – performing saxophone on his seminal album, ‘To Pimp a Butterfly’, will perform tracks from his own debut album The Epic on his UK tour. The album, an almost three hour long modern jazz masterpiece was released last year on the trend-setting record label Brainfeeder and quickly garnered critical acclaim from UK media from Drowned In Sound to the Guardian (who credited it as one of the best albums of 2015).

Fans of Washington will be delighted to learn he is taking several members of The Next Step on the road with him. The ensemble is a ‘cosmic soulful fusion outfit’ (the Guardian) who offer a modern take on the classic jazz big band, featuring a vocalist, keys, trombone and upright bass player, as well as two drummers.

The collective, formed by some of Washington’s closest school friends including critically acclaimed vocalist/bassist Thundercat, recorded the album in prestigious recording studio Kingsize Soundlabs, stretching their limited recording budget by blocking out 27 days and using the time sparingly to record 6 different albums of material from various collective members and over 130 different tracks. Kamasi’s session resulted in the record, The Epic, which is now considered one of the most significant jazz albums of recent years, hitting number #1 on several iTunes Jazz charts, including the US, Canada, Australia, Russia and UK, launching cosmic Washington into the stratosphere.Kamasi Washington tours the UK in June performing at shows including:• Glasgow QMU – 27/06• Manchester Academy 2 – 28/06• Birmingham Institute 2 – 29/06• Bristol Anson Rooms – 30/06

Tickets for Kamasi Washington’s UK tour are available at http://www.axs.com/uk/series/2748/kamasi-washington-tickets?skin=goldenvoiceuk