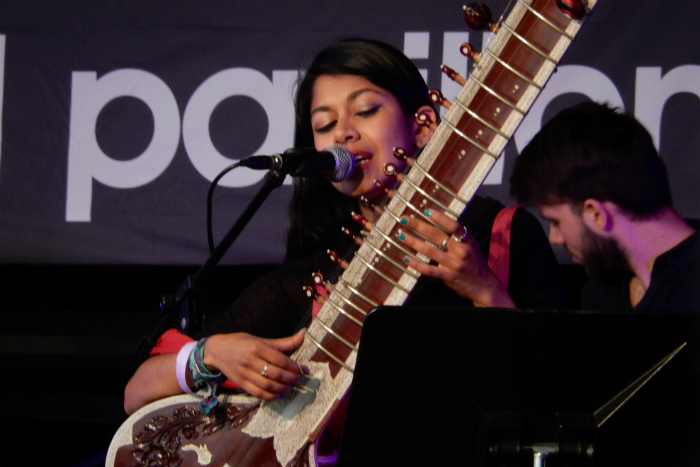 An eager crowd awaited the Shama Rahman Band performing on the last day of Manchester Jazz Festival 2015.  In fact the queue stretched around the Thwaites Festival Square to see what was set to be one of the highlights of MJF’s 2015 programme.

The Shama Rahman Band, comprising of Shama Rahman herself, on sitar and vocals, accompanied by Christopher Lane (guitar), Nicolas Rouger (saxophone), Thodoris Ziarkas (bass) and Oberon King (drums and percussion), has developed a strong reputation for original, playful music.  It is music which draws on Rahman’s Bangladeshi roots, memories, Middle Eastern influences and even the streets of London.

From the very outset, her infectious personality shines through.  She is beaming with delight as she opens the set with the beautiful piece Time.  It’s an ode to how we manage to fall in love again and teases the mystical and exotic sounds of the sitar – her beautiful delicate vocals accompany the entrancing sound before the drums, guitar and saxophone join in, kicking the tempo up a notch.  It builds to a busy and exciting passage as the saxophone takes centre stage before we are reminded of the thrilling middle-eastern influence with another exquisite sitar passage leading to a false ending and a delicate vocal passage to conclude.

The scene and standard has been set very early and the untimely clock tower chimes and a touch of feedback are laughed off by the smiling Shama Rahman. 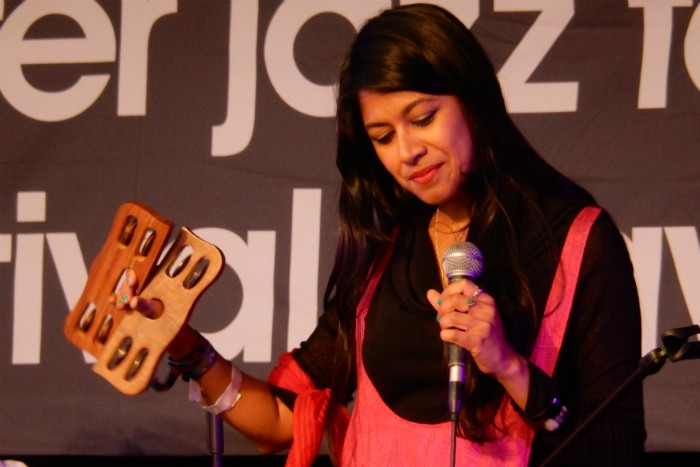 The Bengali and middle-eastern influences are common throughout the set.  In Bolte Paro Ki she demonstrates her bilingual abilities, singing in Bengali – her strong vocals over a busy bass, drum and sitar platform working perfectly in a track which brings cheers from the audience.

The sitar captivates in the striking Matchstick which displays a suspicion of Carribean influence mixed in with classic jazz and Bengali overtones.

The set is filled with variety.  Reflections features interesting rhythms and melodies, 26 Hour Baby more of a playful jazz vibe with changing paces keeping the audience hooked; Liquid Blue hints at a classic rock influence, whilst Ships In The Night from an ‘as yet unrecorded album’ which we hope becomes a reality sooner rather than later, moves from the smooth and traditional to the slightly punctuated and pacey leading to an outstanding crescendo.

She continues to smile throughout, clearly delighted to be performing and the audience respond in kind, clapping, cheering and hanging on every sound.

The story telling within the songs it excellent, drawing on the mystic, love, poetry and nature.  And it is exactly this story telling ability which is featured in the closing piece Where Did You Come From a spoken word track, bursting with drama and intrigue.  Fittingly, the dramatic sitar opening gives way to beefy saxophone interjections, with the vocal element hitting home perfectly to conclude a set which has been simultaneously calming, exciting and invigorating.