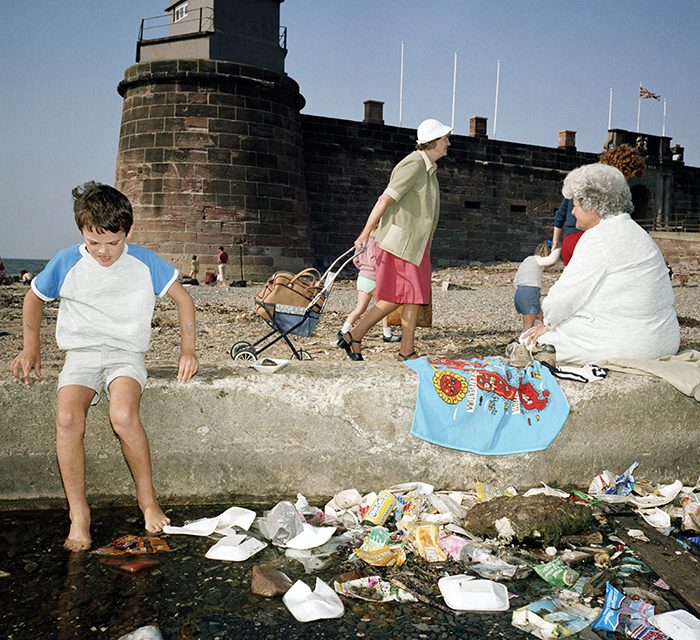 The Royal Exchange Theatre’s Studio Season is set to launch with the première of Luke Norris’ Bruntwood Prize winning play So Here We Are.

So Here We Are, the 2013 Bruntwood Prize winner for Playwriting, is co-produced by The Royal Exchange Theatre and the HighTide Festival and explores the complex and fragile nature of life in a faded English seaside town.

Frankie’s dead. And no-one’s quite sure why. But the boys won’t talk about it. They can’t. There are some truths that men can’t share. When a young life is cut short, the four remaining members of a five-a-side team gather on a cold and empty beach to remember their friend. As the ice-cream van plays its high-pitched tunes these men try to cobble together their memories of Frankie but what do they really know, and what can they simply never say?

With the kaleidoscopic memories of Adventure Land flickering in the background, Norris’ compassionate and candidly funny play, directed by award within Steven Atkinson, paints a portrair of male relationships and childhood friend in Essex’s Southend.

The cast for So Here We Are includes Jade Anouka as Kirsty, Daniel Kendrick as Frankie, Sam Melvin as Pidge, Ciarán Owens as Dan, Dorian Jerome Simpson as Smudge and Mark Weinman as Pugh.

So Here We Are is performed at The Royal Exchange Theatre from 24 September until 10 October with a preview on Saturday 5 September.  Tickets £12/£10.  Age guidance 12+ (contains strong language)

The Royal Exchange Theatre’s Studio is also set to host five other productions this season:

The Chair, a Dissemble production in association with the Unicorn Theatre. Written and directed by Lewis Gibson you’re invited to take a seat and stay a while in the company of O.D. Sawyers, the local barber, to hear his strange tales of fortunes lost and found. With live music and songs THE CHAIR runs from 14 – 18 Oct and is suitable for ages 7+.

West Yorkshire Playhouse and LittleMighty present Blake Remixed by Testament on 6 & 7 Nov. Smashing together UK Hip Hop with the iconic poetry of William Blake, this show is a celebration of the greatest counter-cultural voices in history.

Award-winning theatre makers Chris Goode & Company, in association with the Royal Court, bring their critically acclaimed Men In The Cities to the Studio from 19 – 21 Nov.  Framed by two violent deaths – the apparent suicide of a young gay man and the murder of Drummer Lee Rigby – this is an incendiary piece of storytelling from Chris Goode.

At Christmas younger audiences (and their parents) can groove along to the jazz inspired The Ballad of Rudy. Created by Goblin in association with the Royal Exchange this magical adventure is packed with blues singing Polar Bears, beat-boxing Arctic Foxes and a whole host of jamming Puffins. This original festive show for children ages 3 and up runs from 12 Dec – 3 Jan.

My Son & Heir, a search party performance, is an anarchic celebration of the everyday heroism of parenthood. This playful examination of the guilt-ridden one-upmanship of mainstream baby culture plays on 29 & 30 Jan.