In Review: Sexual Perversity in Chicago at Salford Arts Centre by the 1956 Theatre 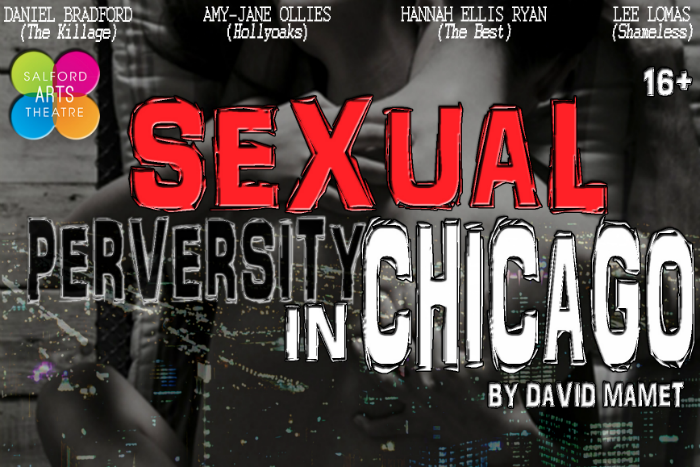 Taking on a production such as Mamet’s Sexual Perversity in Chicago is a brave decision.  It’s a work which can easily go wrong –the chemistry between the characters is essential, there’s a danger that it could come across as crass and will the audience take away from it the humour which it contains?

Having already built a strong reputation for the quality of its productions and brave decision making, including last year’s outstanding delivery of four productions in four weeks in the Manchester Rep season, the 1956 Theatre approached the challenges of Sexual Perversity in Chicago head on.

Mamet’s play examines the sex lives (or as it may be lack of) of two men and two women in 1970s Chicago, through the interactions of its four characters.  It is sharp, witty and at times caustic.  The central characters of the work are Danny and Deborah, a young couple who meet and quickly move in together despite their friends’ (Bernie and Joan) objections – the objections, of course, are not actually motivated by true concern for Danny and Deborah’s wellbeing, but instead by their own views on relationships and self-interest.

Taking on the roles of Danny and Deborah are Daniel Bradford and Amy-Jane Ollies, who both put in excellent performances and have real chemistry.  Their initial interactions have the audience laughing, smiling and wanting the relationship between two wholly likeable characters to be a success, but it’s in the second act where, as their dalliance implodes, they are particularly strong.  As the bond between the two disintegrates, they display real emotion with Ollies evoking genuine sympathy for her character as the influence of Bernie becomes all too telling on Danny and her youthful, hopeful outlook is dashed.

The humour of the play is apparent from the uproarious opening scene as Danny’s friend-cum-boss Bernie (played by the outstanding Lee Lomas) regales him with a tale of a sexual conquest he claims to have had the night before (a conquest which apparently came complete with World War II equipment, sound effects and firemen).  Lomas’ comedic performance of this scene is impeccable and sets the tone for an excellent performance by the whole cast.

Bernie is the sort of friend who has done everything with everyone, or at least he’s the friend who lays claim to this – full of over the top tales.  But Lomas’ portrayal of the character subtly displays the other textures of Bernie – overcompensating, slightly confused and on a deeper level lonely, desperate to hold on to his friend but secretly and subconsciously yearning for a relationship.

Hannah Ellis Ryan also plays the role of Joan particularly well.  Bitter and acid tongued, she delivers a scathing indictment on relationships and men in general.  Her initial interaction with Bernie in particular is a treat as two characters at the opposite ends of relationship spectrums, an apparent man-hater and a womaniser, meet for the first time as Bernie attempts to woo the jaded and cynical Joan.  The heated dialogue between the two even allows for their guards to slip slightly as separate layers of the characters are revealed.

Helping set the scene are the bursts of 70s music, featuring disco and rock classics, which along with the various props help to remind us that the play is set four decades ago, even though it is a tale which has lost none of its meaning today and has stood the test of time.

As the performance comes to an end, the final hilarious but telling scene between Bernie and Danny sums up the ill-fated approach to relationships that they have. Danny’s character regresses further as Bernie’s grip tightens, whilst Bernie’s misogynistic approach has worsened to a level which seems to take even him by surprise.

Sexual Perversity in Chicago took us on a wild ride through the lives and relationships of the four characters.  The highly talented cast made us laugh, hope and despair, delivering a stunning performance, pointing at the many layers of the protagonists.

The 1956 Theatre have put on a stunning production, and if you didn’t make it to the opening night, make sure you make it to one of the remaining performances for a thoroughly entertaining evening delivered by an incredibly talented cast.