In Review: Olafur Arnalds at the Royal Northern College of Music 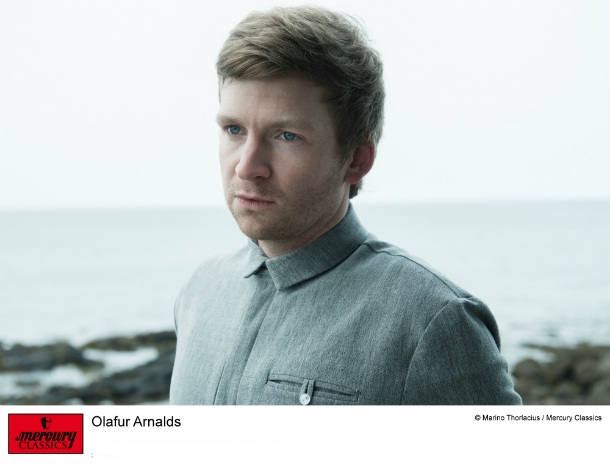 Somewhere a committee at Manchester’s Royal Northern College of Music must be wondering how they let Olafur Arnalds slip through their fingers.  Returning to the RNCM for his first performance in the Concert Hall, he revealed how he had dreamed of studying composition at the RNCM, but that his application was unsuccessful – although it wasn’t too long before they contacted him to specifically commission a piece from one of Iceland’s greatest exports.

Performing a set largely showcasing the soundtrack of Broadchurch, the Mercury Classics artist puts on a spellbinding display, entrancing an excited audience and filling the venue with a sense of awe, anticipation and tension, feeling as if it is part of a musical masterclass.

He immediately gives off the air of a shy, retiring and unassuming composer, waving almost awkwardly at the audience as he walks on stage.  Although it appears that he is likely at his most comfortable at the keyboard or with a pen and manuscript paper,  it isn’t long before it becomes apparent that he has a dry humour and his almost mischievous personality starts to shine through.

With a consort comprising of a string quartet, two french horns and a trombonist who doubles as master of electronic percussion, Arnalds quickly sets the scene with an eerie, almost moody opening as he gently strokes the keys of the grand piano to an accompaniment of strings.  It’s a sign of things to come.  The scene is set.  Moving between two pianos and a laptop, he performs pieces from Broadchurch as well as some of his other compositions.

The music is dramatic and entrancing.  He takes the opportunity to display the wealth of textures and tones which he uses.  He is just as comfortable performing pieces with pulsating electronic sounds, flashing fluorescent lights and even a middle eastern influence as he is in relying on more traditional approaches, such as the ebbs and flows of strings and keys, taking turns to lead in the striking piece Poland, his work which formed a part of the soundtrack to the movie Another Happy Day.  Old Skin demonstrates this perfectly as his mischievous keys and playful strings, accompanied by the evocative vocals of his frequent collaborator Arnor Dan, who joins him on stage midway through the set to provide vocals, make way for an electronic vibe and a marked ’80s influence.

The music is beautifully delicate and holds the audience almost hypnotised throughout.  The clever lighting effects, casting certain instruments into the light or shadows as required, and smoke add to the drama and tension.  The simply stunning, hauntingly beautiful So Far has everybody enthralled as it builds and grows in sound and depth, adding layers, stirring emotions.  At this point Dan leaves as Arnalds closes his set with what is his favourite piece from Broadchurch, Beth’s Theme.

As he exits the stage a thunderous ovation demands an encore and he gladly obliges.  He performs Near Light before the band leaves the stage for his final song, one which starts off as a piano solo – Lag fyrir ommu (Song for Grandma), a sensationally soft, delicate and poignant piece.  The phenomenally talented musician performs by himself, until distant strings can be heard from behind a door on the balcony above, echoing his simple melody.  The effect is stunning.  The audience, already filled with amazement and wonder is truly mesmerised and knows that it has witnessed a phenomenal talent.