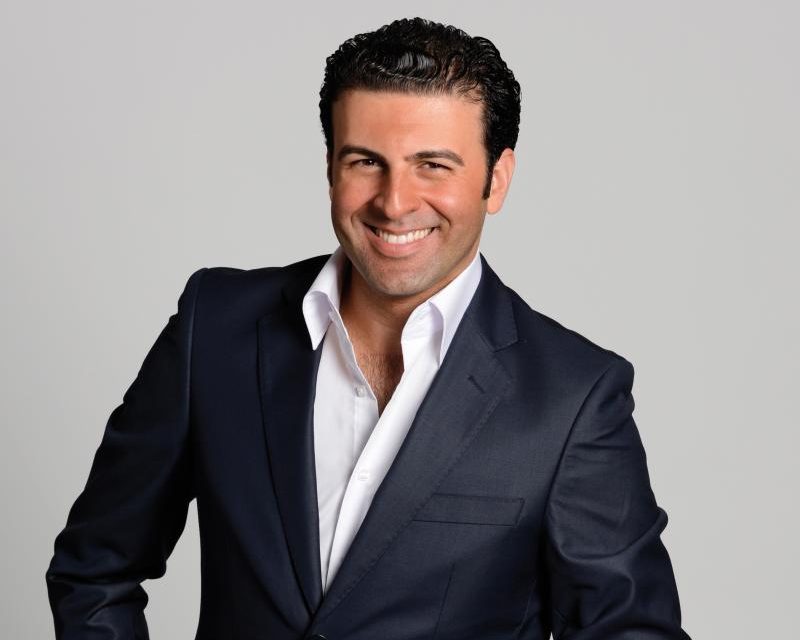 Last night we headed off to the RNCM to watch internationally acclaimed vocalist, David Serero’s One Man Musical – and what a show it was!

Arriving on the Studio Theatre stage looking rather dapper, wearing a suit and a huge smile, the 32 year old French Baritone provided an hour and a half’s truly entertaining performance.

David launched into his opening number, All I Care about is Love (also the title track of his new album), with great gusto. The audience, carried by his infectious enthusiasm and full-throated vocals, clapped along, clearly appreciating his charismatic performance.

Taking on the style of a variety show, songs were interspersed with a bit of stand-up comedy, with David drawing on his own history and Jewish roots for some hilarious (and some slightly cliché!) moments of comedy, which had a multi-ethnic audience laughing along with him. Joking about his slightly late arrival on stage, David told the audience that it was because he had to take an important call from his agent – he had been asked to perform in Iran, all expenses paid, including flights, hotels, meals and funeral expenses! When he died, he wanted to be buried at Harrods … so he knew his wife would visit him at least twice a week!

Comedy aside, David put on a magnificent performance of some of the great stage classics. We were taken on an entertaining journey of opera, Broadway and jazz numbers by a clearly talented vocalist, covering arias such as Toreador from Carmen and the infamous, traditionally tenor aria, Nessun Dorma, which, despite being a baritone, David delivered with great depth and emotion.

Beautifully sung arias were followed by a bit of Broadway, with Fiddler On The Roof’s If I Were A Rich Man and the perennial favourite Singing In The Rain. Clearly enjoying interacting with his audience, David went up into the seated area, getting people to sing along with him. Any reluctant participants who met with the microphone were passionately encouraged to “Sing!”, much to everyone’s amusement, though it was all done in good humour (and we hadn’t laughed so much in ages as when that microphone was put in front of us!).

After a couple of numbers from Phantom of The Opera, including the duet All I Ask of You with Maki Hsieh, a classical vocalist from L.A. who also opened the show for David, we were treated to a half English, half French performance of a duet that David originally performed with Jermaine Jackson, Autumn Leaves.

Continuing his multilingual theme, David performed a Russian number, following which there was a bit more audience participation for the Grand Finale – five audience members were chosen to go up on stage and perform a simply choreographed dance (a bit of stepping side-to-side and turning around with hand in the air!) to accompany the song Mexico.

We left the theatre in high spirits, having had a really enjoyable evening of fantastic vocal performance with a good measure of comedy to boot. David’s energy, passion and joy in his show, together with his fun-loving charm were highly infectious. Our enjoyment could only have been improved upon, if there had perhaps been a full live orchestra backing him, to fully showcase and support his tremendous vocal talents. Nevertheless, One Man Musical was certainly a hit with us and we hope to see more of David Serero in Manchester soon!