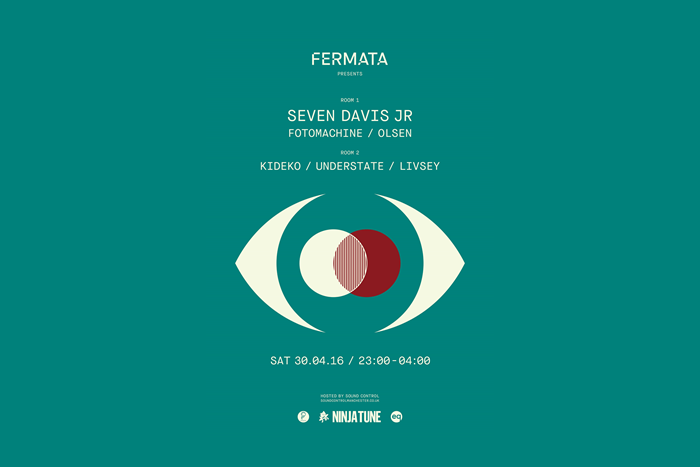 Sound Control is set to launch a brand new monthly club night, Fermata, curated by a team of Manchester based promoters and the minds behind artist management company EQ.  The regular event, which takes place on the last Saturday of every month, promises to present the finest alternative electronic music from across the globe, featuring an international line-up of some of the scene’s hottest tastemakers.

The event will launch with their debut party on Saturday 30 April, headlined by Seven Davis Jr.  Raised on the classic vocal sounds of Michael Jackson, Prince, Stevie Wonder and Aretha Franklin, Seven Davis Jnr developed a deep love for jazz and classical music. The funk and soul spaceman released his stunning debut album ‘Universes’ on Ninja Tune last year with the record being championed as his most honest and heartfelt musical statement to date. Including remixes from Osunlade, Karizma and Brainfeeder (Flying Lotus imprint) alumni – Mono/Poly, Seven has worked with world class artists such as Julio Bashmore, Hot Chip, Steve “Beat” Spacek and more. Having shared stages with everyone from Gilles Peterson to Badbadnotgood he’s also featured in guest mixes on BBC Radio 1 with Benji B and Heidi. Most recently featuring on the Essential Mix alongside Cold Cut (Ninja Tune founders) in celebration of Ninja Tunes 25 year Anniversary he also hosted his first residency at The Nest in London last year.

The launch night bill, split over two rooms, will feature, alongside resident DJs:

Fotomachine – head honcho of Technicolour Recordings the fast rising Ninja-Tune imprint. Drawing inspiration from underground dance music with a hint of the offkey he has found fans in Benji B to Fourtet, with the latter requesting a remix from the man himself. Fotomachine will drop his new EP Black Science in May via Jheri Tracks/ All City and dabbles in everything from soul-indebted house to deep experimental jams.

Olsen – the Manchester based DJ/producer has been making waves with his debut album Totoro, featuring jazz and deep house beats.

Kideko – the Brighton based DJ and producer will be heading up Room Two, having begun to make a name for himself on the UK underground scene he’s already had well-respected DJs supporting his tunes. With a recent mix on Mistajam’s BBC 1Xtra show, Pete Tong premiering his remix for Toyboy and Robin’s latest single ‘Borrowed’ along with Gorgon City playing his new track Crank It at the Mixmag party in Miami, Kideko is the hotly tipped name right now.

Understate – the DJ duo have created a buzz with their energetic live sets merging house, techno and bass music. Picking up label interest their debut track Let It Go featuring Gaby Henshaw they were signed to one of the biggest dance label imprints Armada Deep. With warm up sets for the likes of Disclosure, Gorgon City and DJ EZ behind them, the guys have just released their new track Don’t Stop.

DJ Livsey – the Leeds resident will be providing the finest underground heavy bass driven beats alongside the Fermata residents.

Tickets for the launch of new club night Fermata at Sound Control on 30 April 2016 are on sale now, with early bird tickets priced £7 plus booking fee.