In Review: Monarchy at the Deaf Institute 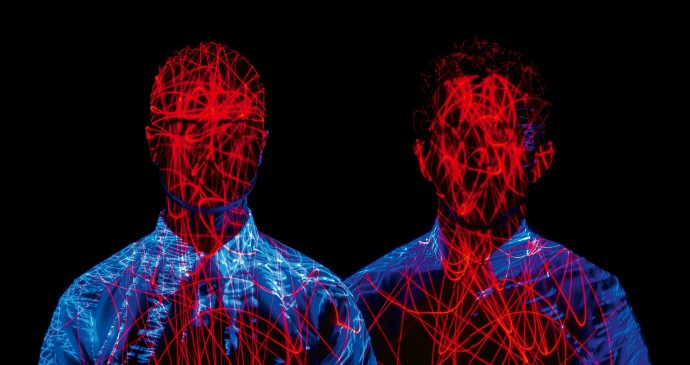 Since their 2009 formation, Monarchy have seen their career evolve at every stage, with the mysterious duo releasing their debut album Around The Sun in 2011, leading to a demand for the electronic meisters to remix some of the finest and biggest names in music, with the likes of Kylie, Marina and the Diamonds, Kelis and Ellie Goulding heading the queue.

With club gigs around the world filling their time, Andrew Armstong and Ra Black waited until 2015 before releasing their sophomore album Abnocto and a 10 track covers EP, Re|Vision.

Stepping on to the stage at The Deaf Institute, with more than a hint of superhero mystique about them, adorning face masks, the duo get set to deliver a set mixed with original material and clever, covers.

From the dramatic opening leading in to Dancing in the Corner, the duo (accompanied by a sole drummer) mixed heavy beats with soaring melodies.  The tempo is upbeat and has the audience dancing from the outset. In fact a number of the crowd are witnessed dancing from start to finish, lost in the music, the hypnotic beats and all-encompassing synths.

Falling In Love With A Memory is one of a grouping of  slower pieces alongside The Beautiful Ones and the stunning Almost Human, which is particularly dramatic following a highly theatrical opening filled with excellent effects, as Abnocto understandably takes centre stage during the first part of the set.

The tempo soon picks up, and the energy levels are high.  The crowd continue to cheer and dance enthusiastically as they perform I Won’t Let Go.

The cheers are particularly noticeable when Monarchy perform Living Without You, and justifiably so – it’s filled with emotion, variation and feeling.

As much as the crowd are cheering, dancing and uptting their all in to the show, Monarchy, as strong as their performance is, interact with the fans very little.  An occassional ‘thank you’ is all they can muster, failing to introduce their songs (not a problem for fans familiar with their music, which to be fair do seem to make up the majority of the mostly male crowd, but not particularly helpful for newcomers to the group).

In the spirit of their Re|Vision EP, they do throw in a few covers, much to the crowd’s delight.  Lana Del Rey’s Video Games is a hit, as is Beck’s Lost Cause, which one particularly persistant fan had been shouting for all evening but the one which has The Deaf Institute jumped and singing back above all is a brave cover of Nirvana’s Lithium – it’s a cover which in all reality shouldn’t work, but does having been honed at festivals over the Summer.

As they leave the stage following an excellent set, the crowd are happy, the synth-pop, rock, theatre has been a huge hit and Monarchy have demonstrated an undoubted ability to perform.  The retro ’80s moments, the theatrics and the heavy disco influence have found a welcome audience.