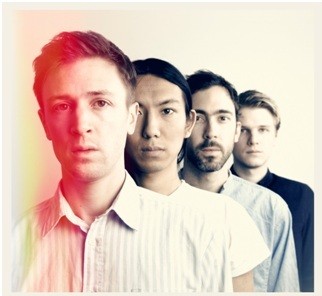 For a band which avoids overloading guitars, steering clear of reverb and maintaining a clean, concise melodic theme, with a strong minimalistic approach, Teleman can certainly fill a room with sound to delight fans. That is exactly what we experienced last night at Manchester’s Deaf Institute.

Before a sold-out Deaf Institute crowd, Teleman performed numbers from their forthcoming album, Breakfast (released 2 June), as part of their first headlining tour. Despite only being together as a foursome for approaching two years, Thomas Sanders (vocals, guitar), Jonny Sanders (synth, Peter Cattermoul (bass) and Hiro Amamiya (drums) are a very tight unit, working completely in-sync, perfectly balanced and allowing their talent and the music to come to the fore.

We had expected an emotion fuelled, almost hypnotic experience and that is exactly what we got, with a crowd which was clearly captivated, so much so that the crowd was actually largely silent during the tracks, despite obviously enjoying the show, but not holding back in sounding their appreciation at the end of each song. True to their recorded material, Teleman performed a set which was heavily focused on vocals, with synth and melody playing a prominent part, although from time to time a heavier guitar sound did break out to tremendous effect.

Whilst many of the gig-goers were not familiar with much of their material, with only a few of their tracks having been released in anticipation of the album, this did not detract from the performance as the calibre of songs was high enough to keep a grip on the audience. Captivation swiftly changed to awe part-way through the set as Teleman performed their biggest track so far, the incredible Cristina, which was incredibly well received.

Arguably, a little more fan interaction would have been welcome, but Teleman allowed the music to do the talking for them and what a tale it told.

Throughout the show, Teleman displayed subtlety and variety, demonstrating an uncanny knack for producing catchy, intricate (yet simple) songs. It is easy to see why critics are taking to Teleman. There can be no doubt about their talent and the material they produce is a step away from the norm, creating quite a unique sound, showcasing vocals, bittersweet pop and a hint of psychadelia. Embracing synths, shying away from dominating guitars and allowing the vocals space to resonate definitely works for Teleman.