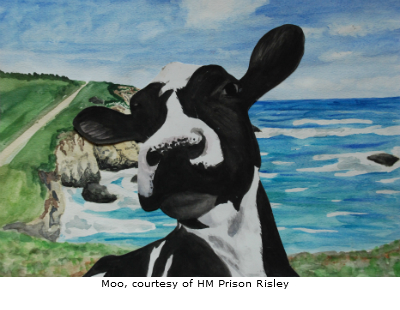 Snail Porridge, also the title for one of the works in this special showcase, is an exhibition of artwork, music and writing from prisons, secure hospitals, secure children’s homes and probationers in the North West.

All of the exhibited pieces have been selected from entries into the Koestler Awards. This annual award scheme has been run for the past fifty years by the Koestler Trust, the UK’s best known prison arts charity, which promotes artistic achievement in the criminal justice system and secure sectors.

The selected works were chosen by Patrick Brill, better known by his pseudonym “Bob and Roberta Smith”. Most famous for his colourful, text-based art, creating humorous, opinionated and polemic slogans, some of his most well-known pieces include Make Art Not War (1997), which belongs to the Tate collection and Letter to Michael Gove (2011), a letter to the UK Secretary of State for Education criticising him for the “destruction of Britain’s ability to draw, design and sing”.

Every year, the Koestler trust receives thousands of artwork entries from prisons and other secure facilities across the UK, which are judged for awards and considered for exhibition. This year several themes in the submitted pieces were identified by Bob and Roberta Smith, including Silence: remembered images of a life outside; Your Inner Being: well-being and inner peace; Snail Porridge: art as a tool for escape to fantasy worlds; and Deal or No Deal: art as a product of prison life.

Inspired by his visit to the Koestler Trust to judge the entries, Bob and Roberta Smith will also be exhibiting a brand new piece alongside the chosen entries for the exhibition, which will see a section of the Koestler Trust headquarters recreated within Castlefield Gallery. 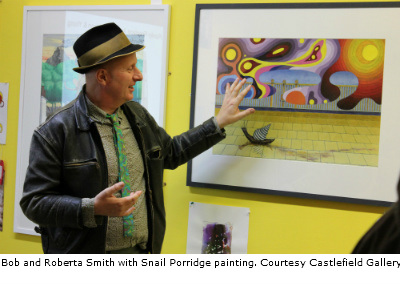 Speaking of his visit to the trust, Bob and Roberta Smith said, “I was amazed to be part of putting together this show ‘Snail Porridge’. I was overwhelmed by the Koestler Trust itself and by staging a partial recreation of the Koestler Trust headquarters in the Castlefield Gallery. I have tried to give a ‘feel’ for what the determination and generosity of the Koestler charity involves. By providing goals to works towards, rewarding achievement and celebrating humanity, the Koestler Trust listens to prisoners’ voices. Making this show has been a great privilege. I hope the visitors of Castlefield Gallery enjoy hearing and looking at what the artists have to say”.

On viewing the exhibition, people are encouraged to consider the benefits to those in the secure sector, of acquiring new skills and developing a new form of self-expression as a means to rehabilitation and also to reflect on the work of the Koestler Trust itself. Snail Porridge will offer the opportunity for people to view an eclectic mix works, by those who are working outside the ‘Art World’ and the conventional ‘Gallery System’. Snail Porridge will form part of the Self-Made component of Castlefield Gallery’s main curated programme and sits decisively within a critical contemporary art context.

Koestler Trust’s Chief executive, Tim Robertson said, “After more than half a century of motivating and exhibiting art in prisons, the Koestler Trust is being taken in an audacious new direction. Art has a serious purpose in criminal justice: it makes offenders pursue the discipline and truthfulness that are essential to building lives free from crime. But lots of prison art is also great art, and this exhibition brings it into the heart of the contemporary art world – curated by one of the country’s most radical artists, in the North West’s most cutting-edge gallery. Like lots of contemporary art, Bob and Roberta Smith’s installation is a mix of witty, moving and controversial – a multi-faceted setting to explore the complex human experiences of crime, punishment and creativity. What’s disconcerting for the Koestler team is that the show re-creates the building where we work!” 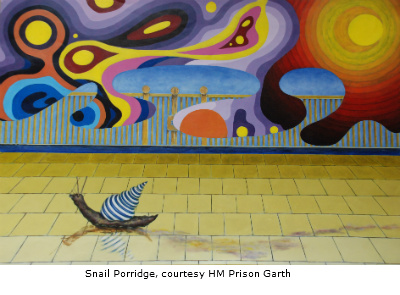