In Review: The Last Days of Troy at The Royal Exchange Theatre 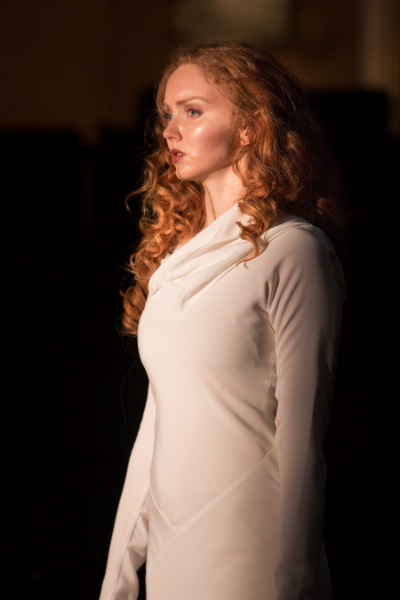 The Last Days of Troy, written by Simon Armitage, whom most people will know for his award winning poetry, takes Homer’s classic poem, The Iliad and fuses it with Virgil’s Aeneid, to create a truly dramatic depiction of the story of the final days of the Trojan War.

Making her first appearance for the Royal Exchange Theatre, with her beautifully pale complexion, long red locks and an inscrutable expression for a woman considered to be the most beautiful in the world and one whose face ‘launched a thousand ships’, Lily Cole takes on the role of the infamous Helen of Troy. Married to Menalaus, King of Sparta in ancient Greece, Helen is abducted (or possibly seduced), by Paris, son of Priam, King of Troy. Taken away to live in the walled city of Ilium to live as Paris’ wife, the fire is lit for a war that rages on for ten years. In the final days, Agamemnon, brother of Menalaus, leads the Greek forces out over the Aegean to rescue Helen and return her to Greece.

Directed by Nick Bagnall, whose credits include directing three Henry VI plays at venues across the UK, including four open-air battlefield performances, all the brutality and loss of war is vividly brought to life on stage, in a tale whose themes still resonate today.

Notions of sizeable armies of men and bloody battles are conceived on a sparse and simple stage-set, with clever lighting, sound, stage smoke and blood used to good effect, to create powerful scenes of combat. Jake Fairbrother gives a memorable performance as the enraged Achilles who slaughters the Trojan Hector (Simon Harrison). Throughout the conflict, the audience are provided with several poignant reminders of the toll that the war is taking on families, both Greek and Trojan. Most notable are those of Priam (played by Garry Cooper) in his moving plea to Achilles to return the murdered body of his son to him, not to mention Clare Calbraith as Andromache, wife of Hector, in her despairing account of the repercussions that Hector’s death will have on her and her young son who will now grow up without a father. 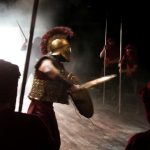 The Last Days of Troy

The battles and war plotting are tempered by an aged Zeus (Richard Bremmer), who intersperses the action of the play with his modern-day recounting of the events that took place leading up to the siege of Troy. The once mighty Zeus, who is seen throughout the play in his heyday, with his family on Mount Olympus as a powerful god, has now become a haggard looking old man who is peddling souvenirs – figurines of Zeus no less!

Bremmer’s character certainly lightens the mood for the audience and provides comedy value as does his wife Hera, wonderfully played by Gillian Bevan, who hen-pecks her husband about mundane matters of daily life such as what’s for dinner, whilst he recounts the tale of the war.

Given the epic length of the Iliad and the fact that he has condensed and synthesised it with elements of Virgil’s Aeneid, Simon Armitage has managed to create a production that, all things considered, runs relatively seamlessly. There is a clear and obvious message about the violence, loss, futility and heartbreak caused by war and the obvious question left as to what, if anything, have we really learnt? Has anything really changed?