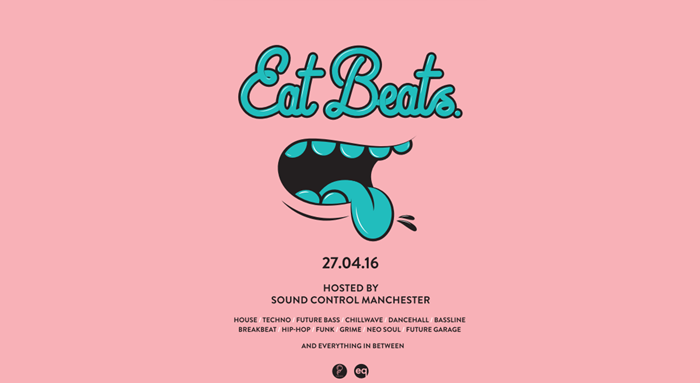 The new club night will showcase the region’s freshest up and coming talent in electronic music as well as established guest DJs and unsigned artists.

Eat Beats will launch on Wednesday 27 April with a line up of top notch DJs covering house, techno, bassline, hip-hop, grime and everything in between.  Split over two rooms, The ethos of the event is a collaborative, feel good party atmosphere with no fuss and no waiting in queues all night to get a drink, go to the toilet or have bouncers hassle you unnecessarily. With cheap drinks and entry combined with interactive competitions to win great prizes and most importantly a great variety of electronic music, Eat Beats promises to become the new go-to midweek party in town

Also on the opening night bill are DJ duo Understate who have been making waves in the house scene with bass-heavy tracks and energetic live sets.  Joining them will be Darr, THC and Abbott.

Room Two features a whole host of music from up and coming artists including Hyphen, quickly becoming recognised across the UK within the bass scene he has played alongside artists such as General Levy and Kurupt FM to name a few. Joining Hyphen will be Manchester based multi-genre duo Brix, with their own show on Fuse FM the duo will bring an energetic mix of future house and bass to Eat Beats. House and techno DJ Haz Money, contemporary and world music artist Ad Hoc and student favourite Cameron Rawson will be providing tunes guaranteed to get you dancing.

As well as holding undoubted appeal for students, Eat Beats is also billing itself as a home for agents, artist’s managers and festival representatives to network and catch the latest talent.