Previewed: The Producers at The Palace Theatre 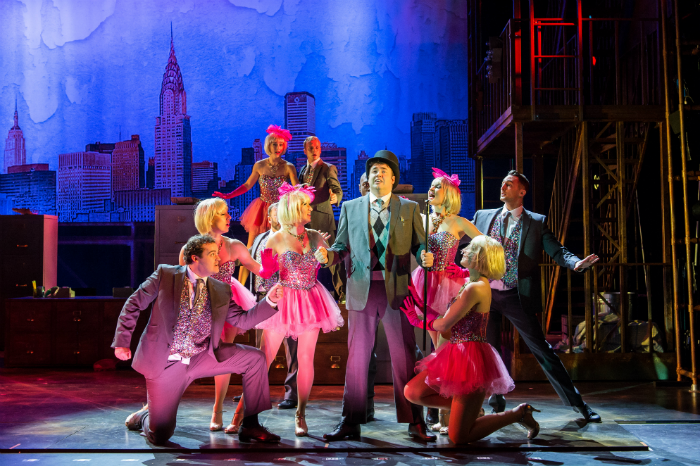 The production centres around New York producer Max Bialystock (played by Broadway and West End star Cory English), who recruits downtrodden accountant Leo Bloom (Jason Manford) to help him pull off Broadway’s greatest scam. Together they aim to produce the worst show in history and run away to Rio with millions, by raising far more money than needed in exchange for shares of the profits and ensuring that the show doesn’t make it past its first night.  But they learn that Showbusiness can always find a way to kick you in the teeth and that there is no accounting for an audience’s taste.

Featuring a riotous mix of eccentric characters and the all-time classic song ‘Springtime For Hitler’, The Producers is the funniest Broadway musical of all time.  This production also sees Phill Jupitus take the role of Franz Liebkind, the short fused, carrier pigeon keeping, former Nazi, brought on board by Max Bialystock and Leo Bloom to help them in their plot to put on the worst musical of all time.  Tiffany Graves also joins the company as Ulla the object of Leo Blooms affections.

Adam Spiegel said; “The Producers is the biggest, funniest Broadway musical of all time. It’s filled with fabulous costumes, glamorous dancing girls, hysterical show-tunes and an incredible live band. With a cast of the most celebrated, well-loved comedians in the UK today and the very best singers and dancers from London’s West End this production of Mel Brook’s record breaking, award winning comedy is guaranteed to be a hilarious night out!”

In Review: Top Hat at the Opera House
The Bodyguard set to come to the Palace Theatre
In Review: Fame at the Lowry Theatre