In Review: Top Hat at the Opera House 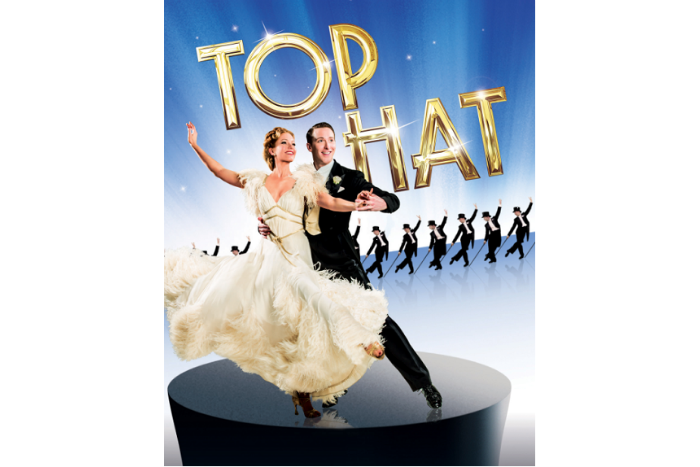 Triple Olivier Award winning musical Top Hat, featuring the classic songs of Irving Berlin and based on the much loved film starring Fred Astaire and Ginger Rogers has arrived in Manchester.  And in the lead roles of Jerry Travers and Dale Tremont, Alan Burkitt and Charlotte Gooch have proved themselves as more than worthy of stepping in to Fred and Ginger’s shoes.

Telling the tale of Jerry Travers (played by Alan Burkitt), the famous American tap dancer, arriving in London to appear in his first West End Show, Top Hat takes us through a whirlwind romance as he meets the irresistible Dale Tremont (played by Charlotte Gooch), quickly falls for her and follows her across Europe to win her heart.  Alas, confusion, a case of mistaken identity and an Italian fashion designer conspire to get in the way.

Reprising their roles in Top Hat, having previously performed in the West End, Charlotte Gooch and Alan Burkitt put in excellent displays, with breath-taking routines and flawless footwork, strong singing and a chemistry which would make even golden couples of the era envious.  Their interactions are delightful, with some excellent comedic moments, and leave the audience truly rooting for them.

Whilst the focus of Top Hat is, understandably on Travers and Tremont, it’s impossible to overlook the supporting roles, which added tremendous humour – both in terms of wit and some slapstick moments.  Husband and wife Horace and Madge Hardwick (played respectively by Clive Hayward and Rebecca Thornhill) form the backbone of this with their relationship and feelings for each other allowing for some hilarious one-liners, particularly on the part of Horace who repeatedly bemoans his wife’s unerring ability to spend his money.  Sebastien Torkia and John Conroy (playing the Italian fashion designer Alberto Beddini and The Hardwick’s butler Bates) are also excellent – Bates’ hilarious family sayings and disdain for his master being matched by his amusing penchant for disguises, whilst Torkia’s slick portrayal of Beddini was an over-the-top delight, including what can only be described as a very brave ‘mating’ dance.

Featuring classics such as Puttin’ On The Ritz, Top Hat, White Tie and Tails, Let’s Face The Music and Dance and Cheek to Cheek, musically Top Hat was always going to be a winner with the audience and the orchestra could not be faulted, delivering perfectly.  From the opening, the orchestra performed with a vigour and energy which only served to enhance what was happening on the stage, underpinning the actors’ singing and dancing perfectly.

It would be a shame to comment on Top Hat without mentioning the costumes and staging.  A mention must go to Hildegard Bechtler (Set Designer) and Jon Morrell (Costume Designer) for their wonderful work.  Top Hat apparently contains over 200 costumes, all displaying a stunning sophistication and elegance.  The set design is also exceptional, taking on the form of a stunning hotel in both London and Venice – with it’s versatility also leading to an excellent scene in which Travers’ tap dancing is cleverly played out by a silhouette figure in the hotel room above Tremont’s whilst she is attempting to sleep.

Given the strengths of the performances, music, stage and costumes, it is no surprise that the audience was delighted with the show, and celebrated it with a standing ovation.  Top Hat has humour, tremendous musical numbers and stunning dance routines and is, without a doubt, a musical to catch.  Excellently directed by Matthew White, Alan Burkitt and Charlotte Gooch captured the hearts of the audience and delivered a sublime theatrical experience.