In Review: Jazzgalore Presents ‘The Evolution of Dance’ at The Dancehouse 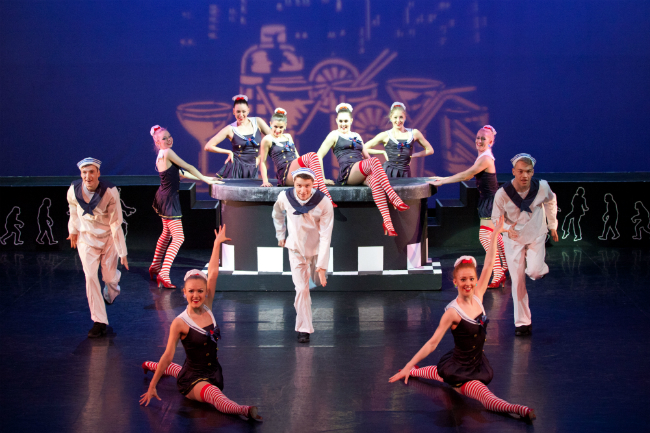 The tagline for Evolution of Dance was ‘As soon as man was able to walk, he was looking for ways to dance’. In truth I’ve been looking for ways to dance for a long time. The jazz lessons I took can account for that and proved two things to me – firstly that dancing on more than a social level is a skill and discipline which is not for the fainthearted, lazy, unathletic or those lacking complete and utter determination; secondly, despite enjoying every minute of it, that both of my left feet are also flat. Thankfully the performers from Jazzgalore tick all the boxes in the first category.

Jazzgalore is the performing company of the Northern Ballet School, based at the Dancehouse of Oxford Road, and an internationally recognised centre of excellence.

In Evolution of Dance, they took us on a whistle-stop tour of music and dance through the ages. We started with the origins of man, tribal music to a heavy drum feel, but were quickly whisked into the 1900s where the bulk of the performances were based.

The twenties and thirties saw displays of tap choruses, romantic epics and 20s and 30s inspired dance in groups, large and small, to the sounds of Happy Feet (Manhattan Rhythm Kings), Flickers (Night And Day) and ‘S Wonderful (Gershwin and Williams) as well as a strong solo singing performance from Timothy Booth with Embraceable You.

But it was the 1940s where things really moved up a beat. With a rousing display that really set pulses racing, a large male and female group donned sailor attire and gave a performance of Candyman (Christina Aguilera and Linda Perry) full of enthusiasm and drive which had the audience enthralled. This was immediately contrasted with a slower ballet duo to the Rodgers and Hammerstein piece Bali Hai which was an impressive display of poise and was beautifully performed. Following on from this came the group piece Swing Tap (Prima and Ellington) which lifted the pace and energy levels again, before a daring, and somewhat risqué, solo performance from Francesca Fleming to Willie Dixon’s I Just Wanna’ Make Love To You full of sass and attitude to the accompaniment of four of the male dancers.

As the 1950s finished to a roaring all-male dance performance of Johnny B Goode, the first act closed and there was time to take a breath and rediscover our composure. The physical exertion they had put in, had us feeling exhausted and we were just sat watching. It was amazing the dancers were able to come out for a second act after such effort, but they did and they performed exceptionally.

The second act took us from the 1960s through to the present day and featured Jazzgalore’s performers displaying their vocal talents, chorus and individual, to a variety of pieces as well as exhibiting more impressive dancing, sometimes appearing to take their life in their hands, leaping trustingly through the air to be caught by their partners (they are braver than I ever was). The 1960s were covered appropriately by the whole cast performing Welcome To The Sixties from Hairspray and then a smaller set of the company remaining on stage for Rich Man’s Frugue (Sweet Charity) before the 70s witnessed Magic To Do (Pippin), Fosse (Pippin) and the vocal skills of Bradley Parsons with Corner Of The Sky (Pippin).

Whilst some of the previous pieces may have been unknown to some members of the audience, from the eighties onwards, there was no lack of familiarity, kicking off with a performance of Bad (Michael Jackson) which was full of attitude and the right amount of aggression, followed by the gentler Together Again (Janet Jackson) and the raucous C’mon Vogue (Madonna) before the final numbers brought the evening to a conclusion with Boom Boom Pow (Wil. I.Am) and Toxic (the District 78 mix of the Britney Spears hit).

As the entire company bade their farewells to a Finale penned by Nathan Duvall and Megan Cottone, the audience was left thrilled and satisfied, applauding with delight. Jazzgalore had put on a wonderful show, brimming with vitality, enthusiasm and bravery. By and large, the timing was tight, technique was good and the heart and desire of all performers could not be faulted.

The choreography (by David Needham, Eric Carpenter, Tracy Baxter, Darren Pritchard, Jo-Ann Cunliffe, Martin Dutton, Anthea Garrett and David Bradford ) was also wonderful, exploring a variety of genres (as needed to be given the span of ages the evening was to cover).

The diversity of performances and styles was welcome and brave, but pulled off immaculately, including making use of an excellent and assorted wardrobe, which was selected to perfection.

The Northern Ballet School’s next production will be A Showcase of Dance, 10th – 12th July 2014. If this was anything to go by, don’t miss it!