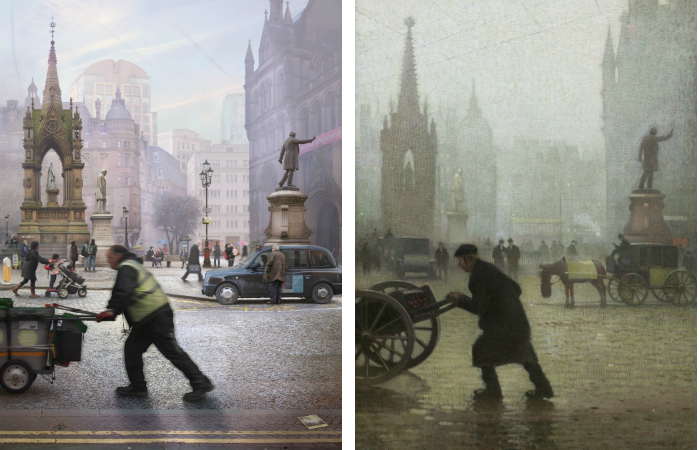 London based artist Emily Allchurch has launched her new exhibition In the Footsteps of a Master at Manchester Art Gallery.

Using photography to recreate old master paintings and prints, providing a new narrative and context to classic works, Allchurch’s exhibition marks her first solo show in a major public gallery in the UK and during this exhibition she will present her celebrated Tokyo Story and Tokaido Road series.  These works take inspiration from the 19th century Japanese printmaker Utagawa Hiroshige and pay homage to his masterpiece One Hundred Famous Views of Edo and 53 Stations of the Tokaido.  Allchurch’s technique involves using hundreds of photographs, taken in urban environments to create seamless digital collages, fusing contemporary life with the past and dealing with history, culture and the passage of time.

Manchester Art Gallery has specifically commissioned Allchurch to produce a new work based on Adolphe Valette’s painting Albert Square, Manchester 1910.  As an artist Valette lived in the city for many years, painting atmospheric views of the city, capturing the essence of Manchester at the turn of the 20th century.  The piece, commissioned via a successful Art Fund campaign through Art Happens, the UK’s only crowdfunding platform for the museum sector, re-creates and updates Valette’s cityscape, transforming it into the 21st century.

In the Footsteps of a Master by Emily Allchurch is exhibited at Manchester Art Gallery from 13th March to 7th June 2015.