In Review: Jaws at Manchester Academy 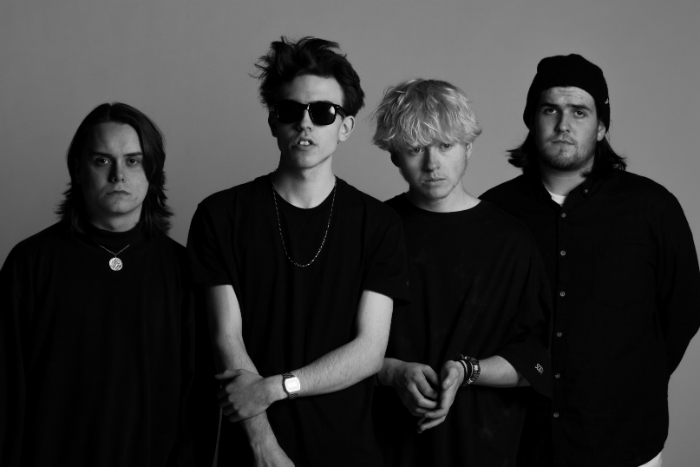 There’s a feeling of anticipation in the air at Manchester Academy 3 before Jaws come on stage.  The atmosphere is positively electric as the youthful fans await their entrance.  The feeling has been building all night through supporting acts Spring King and the impressive Happyness, and the sell out crowd are desperate for Jaws to make their appearance.

Jaws have gained significant popularity over the last twelve months, going from strength to strength, picking up countless followers along the way, exposing them to the indie, dreamy pop/rock which they perform so well, and we’re about to experience why.

As they stroll on to the stage, the crowd immediately goes wild and within moments, there’s an almost stadium feel to the venue as the smoke and lights from on stage are accompanied by arms being thrown in the air and an almost hypnotic bouncing mass in front of the stage, lapping up the atmosphere and reveling in the sound of the highly talented quartet.

Basking in the sound of their fans singing back to them, cheering their every movement and sound, and bouncing up and down with delight, Jaws show why they are on such an upwards trajectory, and why they have won so many plaudits.  The biggest cheers are understandably reserved for Surround You, Swim and the excellent Think Too Much, Feel Too Little as debut album Be Slowly forms the backbone of their set, but they also offer a brief hint of what is to come as they perform some new material, which is slightly heavier, although just as catchy.

Considering their relatively young ages (none of them aged above 21), they also display an impressive stage presence and look completely at ease.  And whilst the majority of the crowd are too young to recall The Cult, those that can notice the similarities in the sound, which Jaws use to full effect throughout the set, synths and drums forming the basis of their tracks.  You get the feeling, watching them, that this is band which will continue to grow in popularity and will hone their already unquestionable skills even further.

With the set coming to a close, vocalist Connor Schofield, announces that they have reached the stage where they are traditionally supposed to walk off, wait a moment and the return to play the last couple of pieces.  But he queries what is the point in leaving simply to come back again (he does have a point!) and so they launch into final songs Toucan Surf and Friend Like You before leaving the stage and a very enthused crowd behind.  There are a couple of murmurs about the length of the set, running at around 50 minutes, but the majority of fans are clearly delighted with what they have heard, although they will feel like they have hit the weights at the gym too hard through spending most of the evening reaching for the ceiling of Academy 3.