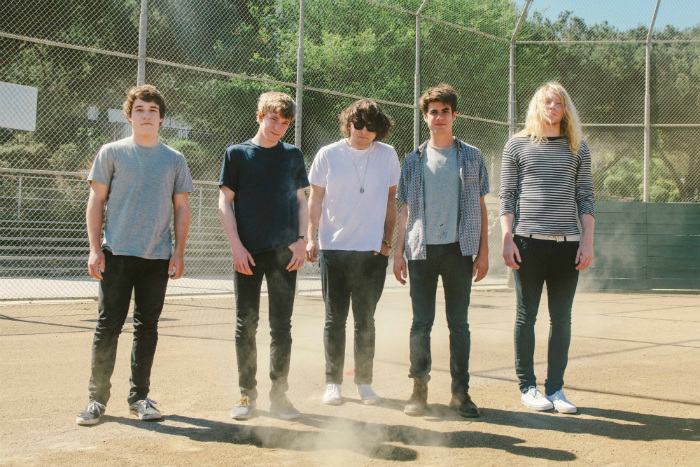 We’d heard the tales of the riotous gigs which The Orwells put on, where the rules go out the window, and everybody just cuts loose in a frenzy of raucous fun. Now was the time to put this to the test, to see whether their live gigs were quite as mental as we’d been lead to believe and, more importantly, whether The Orwells could really match their impressive recordings, including their still new album Disgraceland.

Walking in to Gorilla, it was immediately noticeable that The Orwells attract quite a diverse crowd, teenagers standing shoulder to shoulder with men in their forties (and a couple older than that). But the mix made for a red hot atmosphere as anticipation built and the crowd swelled, filling the venue.

As The Orwells walked on stage around 9.10pm, singer Mario Cuomo sporting a half drunk bottle of wine (we couldn’t tell the vintage), it was apparent that they have a devoted following, the roof practically coming off as the red hot crowd turned white hot.

They launched into opening track Other Voices, and straight away showed that yes, they are able to turn it on live, and as well they should be as they have been touring relentlessly over the last few years.

By the second song ,The Righteous One, a mini mosh pit had formed in the centre; the lively crowd was hooked – jumping, screaming, singing back every word as, on stage, The Orwells continued to play through their one hour set. Each song was performed remarkably well and not even technical problems midway through could throw them.

As the gig progressed, the band really cut loose, but the standard remained high. The grungy-garage-indie sound came across perfectly. The band was tight; the singing was top notch.

Most of the tracks performed were from their latest album, Disgraceland, but tracks from their previous album Remember When also made an appearance with the likes of Mallrats and In My Bed. Despite the album only being released this week, it was clear that the fans already knew every word to each song.

The mosh pit, as expected, grew, but things stayed in control; no riots, chaos, or (thankfully) on-stage twerking, just a great set of songs and a lively, energetic and animated atmosphere.

Part of the beauty of Gorilla is that the fans are so close to the stage that they are often within touching distance of the band, as they were on this occasion, creating an electric chemistry between band and fans. If we had a gripe, it was that there was very little spoken interaction; by and large they let their songs do the talking for them; with singer Mario milking the adulation of the crowd for everything he possibly could with simple gestures or expressions, or just by standing at the end of the stage so that fans could grab and pull at him. That seemed good enough for the fans and it actually did add a certain air of mystique.

If you’re a fan of guitar bands, you should definitely check out The Orwells.