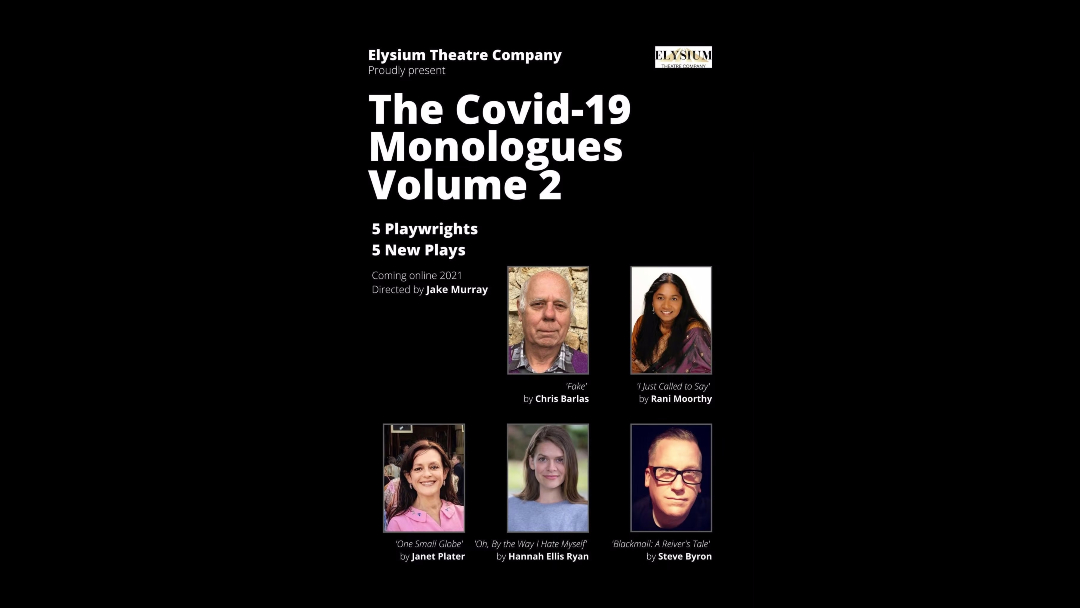 Manchester based Elysium Theatre Company has been recognised with the prestigious Olwen Wymark Award by the Writers’ Guild of Great Britain.  The award comes for its work in supporting new writing, particularly in commissioning works for online productions.

Elysium Theatre Company began producing The Covid-19 Monologues on its YouTube channel last year.  The programme was designed to bring the arts to audiences on-screen.

Now the company has released a further five online plays, shortly after receiving the award.

The approach to creating the series of productions involved commissioning writers to pen monologues on any subject, rehearsing and directing over Zoom and then filming with full social distancing measures in place.  Each monologue lasts from 15 to 30 minutes and is available free on Elysium’s YouTube channel.

Elysium co-founder and Director Jake Murray said of the award, “I was completely stunned and very honoured. New writing is the life blood of theatre. We’re all trying to find the Shakespeare of the future. People forget that the classics we have been watching for years were all new plays once.

“We have now produced the work of ten playwrights and have built a platform on which we can do more new writing going into the future. It has transformed the company and the idea of what we can do.

“Covid forced us online, and this whole process of the monologues is a prime case of ‘necessity is the mother of invention’. We’ve loved it – it’s a whole new medium. It’s not film and it’s not theatre, but somewhere in between.

“We are so excited to be bringing another five fantastic play to the people, all of which have been created by a set of supremely-talented writers and performed by some incredible actors.”

The latest series of monologues include two written and performed by local talents.  One, Oh By The Way I Hate Myself, was written by Elysium co-founder and in-house producer Hannah Ellis Ryan.  The piece was performed by Laura Littlewood.  In the production, Laura’s character Beth has just returned from her mother’s funeral and after a few glasses of wine tells the ‘truth’ about her dearly departed mother.  Speaking about Oh By The Way I Hate Myself, Hannah Ellis Ryan said, “I am fascinated by the current obsession with YouTubers, where people will spend hours watching someone talking into a camera and sharing their thoughts.

“It is not unusual for someone nowadays to sit and watch someone speaking almost directly to them, and I guess that is why the Covid-19 Monologues work so well.

“What the Monologues have given us is something very different to live theatre – it all feels very intimate. Each monologue has one person almost one on-one with the person watching on the other side of the screen.

“It has been amazing getting to develop new skills and learn new aspects of working with online as a medium, and I am sure our online work will continue in some way once theatres reopen.”

Other productions available to stream on Elysium’s YouTube channel include:

FAKE by Chris Barlas, performed by Karren Winchester: Chemtrails, 5G, anti-vaxxers, Covid-19, the New World Order: Marion is an online warrior who has exposed the awful truth about the global conspiracy to control us, and she is going to show us the way… An exploration of conspiracy theories and the power they have over our minds nowadays, ‘Fake’ focuses in on the personal trauma that lies beneath so many of them. Chris Barlas (author) is a veteran writer for TV, radio, stage and film, particularly the BBC & ITV, including several seasons of ‘Byker Grove’.

ONE SMALL GLOBE by Janet Plater, performed by Jake Jarratt: Joe is an actor. He hasn’t had a lot on since Covid-19 closed all the theatres, but he wants to tell you about a new job he’s got: its out of this world. A passionate plea for the glory of theatre, ‘One Small Globe’ is a rich, comic, fantastical story with an edge. Janet Plater is a Newcastle-based playwright and theatrical agent (the main NE one), ‘Georgiana’, Buxton International Opera Festival, which won the ‘Outstanding Achievement in Opera’ Award at the British Theatre Awards 2019, ‘The Gaul’, Hull Truck Theatre, ‘Hull’s Angel’ Alphabetti Theatre, Kardomah, ‘Gaslight on Grey Street’, Theatre Royal Studio and ‘Haddock and Chips’, Carole W Productions.

I JUST CALLED TO SAY… by Manchester based Rani Moorthy, performed by Alex Townson: A young man watches his father in ICU you on his tablet. As he hopes for his father’s survival, he unburdens himself about their relationship, and the violent abuse at the heart of it. A powerful monologue dealing with physical abuse, family, sexuality and the search to find out who you truly are. Rani Moorthy is a Malaysian-born actor and writer based in Manchester. Artistic Director of her own company, Rasa, her theatre credits include ‘Whose Sari Now?’ (BBC 4), ‘Too Close To Home’ and ‘Curry Tales’. She is best known for the hugely popular character Mrs Bilal in ‘Citizen Khan’.

BLACKMAIL: A REIVER TALE by Steve Byron, performed by Micky Cochrane, with singing by Sarah Boulter: a powerful drama from the era of the Reivers, when the English-Scottish borders were dominated by criminal families who terrorised the land with extortion, blackmail and murder. These families included names who have gone on to become major figures in the modern day: the Nixons, the Johnsons, the Maxwells, the Armstrongs, the Dacres and many others. Written with the epic quality of a Western, ‘Blackmail’ is part of the folklore of the North East and its history. It tells the violent tale of an ordinary man who, provoked by the Reivers, took the law into his own hand. Steve Byron is a North Eastern writer and actor. Writing credits include ‘Bacon Knees & Sausage Fingers’ which was a smash hit at the Alphabetti theatre, ‘Floorboards’, ‘Walter’ and the upcoming ‘Sucking Eggs’.