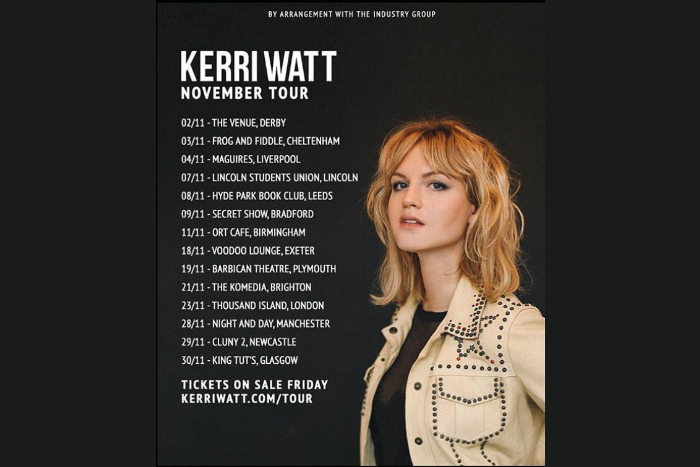 Kerri Watt marks her first ever headline UK tour with a Manchester gig at Night and Day at the end of November.

The BBC Radio 2 A-listed singer songwriter will perform 14 dates across the UK, kicking off in Derby  before performing in Manchester, Liverpool, Leeds, Birmingham, London and her home town, Glasgow.

“I’ve spent the last couple of years supporting some amazing acts across the UK which helped me pick up fans around the country” she explained. “I’ve really seen a demand on social media for me to play some headline shows, so it’s definitely the right time for my first headline tour! I’m looking forward to seeing some familiar faces from previous tours plus hopefully some new fans since the release of ‘Old School Love.’ My last show is in my hometown of Glasgow… a perfect way to kick off the Christmas season!”

News of the tour followed the release of Kerri Watt’s single Old School Love, her East West Records debut.  Old School Love marked a slight change from her previous two singles, the BBC Radio 2 play listed ‘Long Way Home’ and ‘The Wild’.  With a more simple production and mellow instrumentation, it’s a love song that as its title suggests, plays homage to an old school sound.

Over the past year, Kerri has been travelling across the world, performing and writing new material. This includes a track written and recorded with Embrace which she recently performed with them at their two night opening slot for Coldplay at Cardiff’s Principality Stadium – in front of 74,000 – her biggest audience yet.  She has also supported the likes of Nina Nesbitt, Ward Thomas, Starsailor, Mike and the Mechanics and The Overtones.

Where and when does Kerri Watt play in Manchester?

Kerri Watt headlines at Manchester’s Night and Day on 28 November 2017.