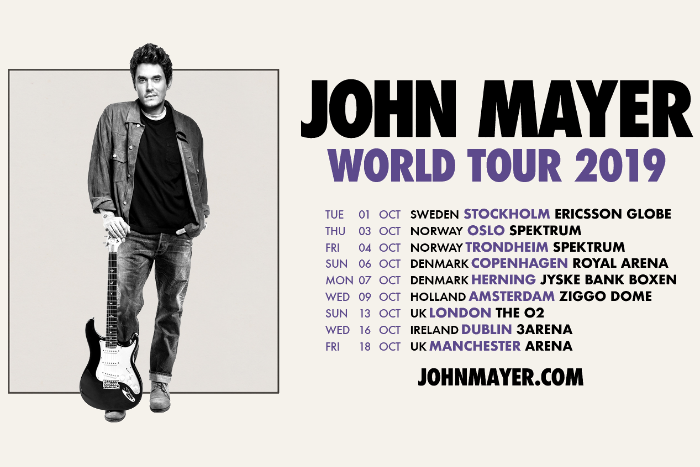 John Mayer has announced a run of European tour dates with three UK and Ireland shows including a gig at Manchester Arena.

The Grammy Award winner has added a series of European dates to his 2019 World Tour.  He will headline at Manchester Arena in October 2019.

Mayer’s 2019 World Tour launches in New Zealand and Australia on 23 March and then heads to Asia. He then will tour North America, for the fourth consecutive year, with Dead & Company, before launching his solo tour of North America in July.

Mayer has confirmed nine European tour so far, including three in the UK and Ireland.

John Mayer released his latest single I Guess I Just Feel Like in February.  The single charter in 17 countries across the world.

The tour is set to feature two sets of music spanning his entire recording career with no opening act.

Two pairs of front row tickets, each with a preshow meet & greet with John Mayer, will be auctioned off for every concert in Europe. All proceeds will go to benefit the Heart and Armor Foundation, Back to You Fund and other associated charities.

When does John Mayer headline at Manchester Arena?

When do tickets for John Mayer’s UK tour dates go on sale?