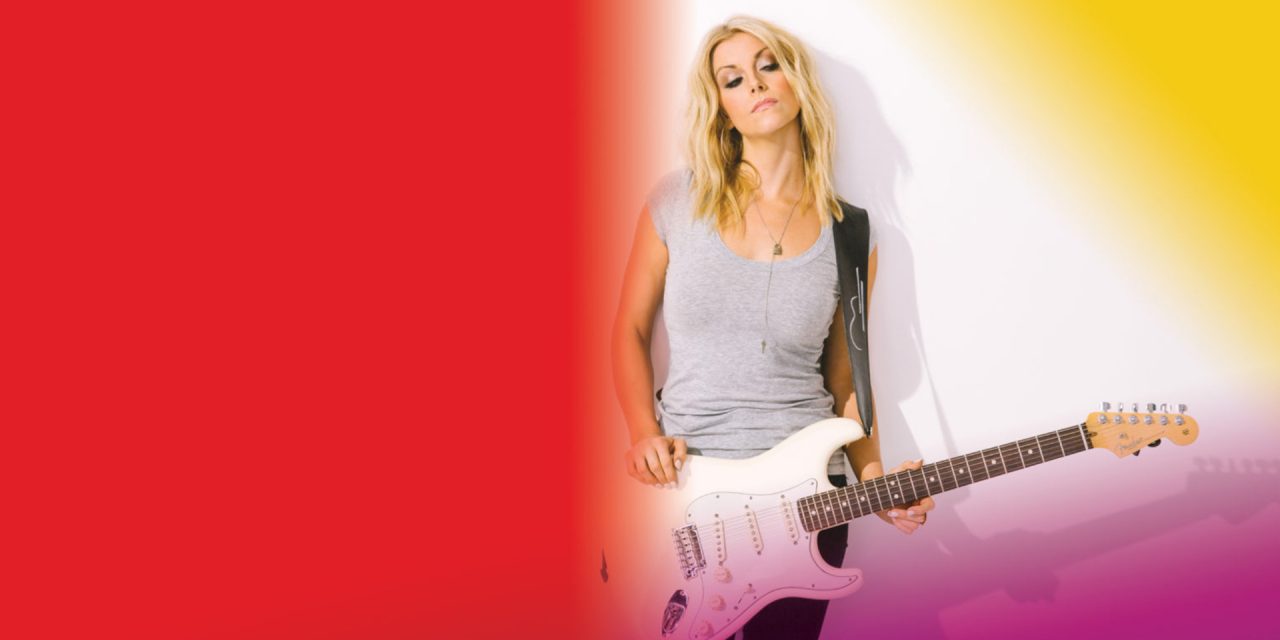 Lindsay Ell makes her welcome return to Manchester in October with a gig at the city’s Night and Day.

The Manchester gig, one of two UK dates she is playing, marks her return to the city where she performed a joint headline show with Kristian Bush earlier in the year.  And when we say joint headline, we are talking literally.  At March’s Ruby Lounge show, the two sensational performers took to the stage together to perform in turns (and on each other’s material) in an unscripted, set-list-free gig.  Fans loved it.  Lindsay Ell clearly loved it.  Sugarland’s Kristian Bush loved it.

Will her next Manchester gig be more conventional?  It’s no surprise that fans can, “expect a lot of guitar solos”.  She continues, “It is going to be a special intimate show. A show I have never performed in the UK, as well as brand new music. I am in the midst of writing my next record right now. I want to share some of that with the UK first and foremost. These are songs that I have never played in front of audiences before. I really want to see what you guys think of them. I am so excited to come back. It’s going to be a very special evening.”

Whilst I’m speaking to Lindsay, she is on tour with Sugarland, which has worked out conveniently when it comes to the music she is currently writing, as Sugarland’s Kristian Bush is her producer.  “[The] writing has been going amazing” she tells me, “We’ve been able to write a lot on the road which has been so special, as well as at my home in Nashville.”

She explains that she has been writing most days and has a lot of new material to choose from when she heads into the studio at the end of the year.  In some ways I’m surprised that she is already heading back in to the recording booth, with her latest releases The Project and The Continuum Project both hitting shelves in only the last twelve months.

“There’s no time like the present,” she responds.  “It has been a whirlwind and it’s been so incredible” she says of the period since releasing her excellent debut album The Project.  “Yes, the past 12 months have been so exciting. The fact that I got to release my debut album, it’s officially had its one year, first anniversary over here in the States. We actually re-released the record over in the UK at C2C back in March. It’s been exciting to see everything that happened this past year. We’ve been on the road since the Brad Paisley tour. We’ve been playing a lot of festivals over the summer.  Of course, I’m out on the road with Sugarland right now.  We are about to hop on the road with Keith Urban.  It’s been very exciting. It’s probably one of my busiest years yet and I’m just so grateful.”

I want to know how Lindsay’s songwriting has evolved since her Continuum project, where producer Kristian Bush tasked her with re-recording John Mayer’s Continuum – her favourite album.  “Great question,” she responds … “Working with Kristian has changed a lot of things, how I approach recording music and definitely, how I approach writing music. After doing The Continuum Project, I really felt like my mind was able to click into gear and understand why I love certain songs that I listen to all the time so much. Sometimes you love listening to music but you don’t necessarily know why you love those certain songs so much. I was able to dissect every part of them and by re-recording them by myself and by playing all the instruments on the record, I was able to go through the process of what really makes music that I love.”

“Therefore, in the writing room, it was so much easier to sit down and be like, ‘All right.  These are the ingredients to things that I love.’ As backward as it sounds, sometimes it takes going through that process the opposite way to really figure out what I wanted to record on my next album.  For album number two, this is an important sophomore record. I’m in the middle of that process right now. Generally, for writing, I feel like I’m writing the most honest and the most vulnerable that I ever have. I really feel like those were the songs on The Project that fans fell in love with first. A song like Worth the Wait, where I really get honest with where I’ve been.  Sometimes, this life isn’t really always glamorous. It’s the unglamorous parts and pieces that really make you appreciate and really give me some inspiration to write about.” 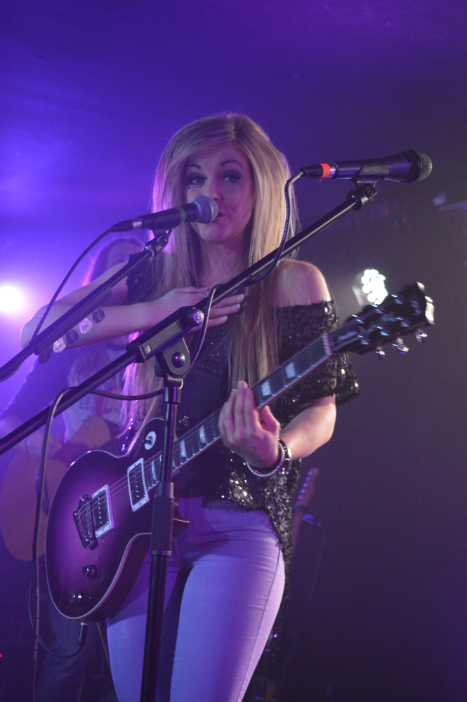 I ask Lindsay about the unconventional approach she often takes to music – whether it’s risking a show without a setlist, re-recording a classic album in its entirety, or painting a series of guitars to represet each song on her debut album The Project.  This is where the magic is, she explains, “I find when you do things in unconventional ways that’s when you find the magic. Playing shows with Kristian and not making a setlist, there’s just a freedom in it. From a creative standpoint, it goes through a different part of my brain where all of a sudden, I just feel like there are no rules. I feel there are no boundaries. I can just go wherever instinct takes me” (instinct certainly worked wonders that night – it truly was a fantastic show).

“Same with painting guitars, I’m a terrible painter. I’ve never really painted anything before I started painting guitars. It was just something with a creative release that let my brain explore an area that it has never been before. You get something cool in the process. I’ve really tried to lean into that direction, even from songwriting to help just bring fresh things. I think the fans appreciate it because they see that vulnerability and they can come on the journey.”

I want to know more about this – there must have been times when this didn’t quite work out – maybe there were some bloopers on the joint headline tour?  “Yes, absolutely, ” she answers honestly, “but sometimes wrong turns into incredibly right. The magic of mistakes is they can be brilliant at the same time. Yes, that’s one of the many things that Kristian told me or taught me a lot. You just go with it sometimes and if it is wrong, then, ok. You either turn around and circle in the other way or you see where else it leads you. From a life perspective, when you make some of those ‘mistakes’, sometimes they can be pleasantly surprising.”

The Project has recently spawned latest single Champagne, which has been particularly well received by fans.  The song was written by Lindsay Ell with Walker Hayes and Nashville’s Fred Wilhelm.  “This is a song, the minute The Project was released, I felt fans gravitate towards,” she also notes. Sticking with the unconventional, the song features a baritone sax from the beginning, which is atypical of her country genre.  “It’s a song that speaks a lot to female empowerment and girl power.” she tells me about the lyrical content, “Exactly the way I think that a woman wants to be treated. It’s been so fun to see fans fall in love with this song and start singing it live. … The three of us just, I don’t know, whenever we get into the room, we just find this magical space. It’s almost like anything is limitless. I remember sitting down and we were writing the chorus, and I’m like, ‘Do we really rhyme the words feel with Jessica Biel?’.  Of course, to Walker, nothing is impossible to his writer’s brain. We ended up going with it. Now, it’s one of my favorite moments on the album.”

“I remember the little girl dreaming of being on the road every single day, and now I’m getting to live that life”

Like many out there, I’m an awful guitarist.  I try.  Occasionally I manage to put together a few chords (some of them deliberately).  But despite my fingers’ refusal to comply, I always want to know about guitars.  And when I’m chatting to somebody with the ability of Lindsay Ell, one of the finests guitarists in the world, I just have to know what her go-to-guitar is.  And she’s a little stumped.  “That’s a tough question. It’s almost like choosing a favorite child. I don’t have any children but I would assume it’s too much of the same thing,” she laughs.  “Right now,” she continues, “my favorite is probably a strat that Brad Paisley built for me. He gave it to me as an end of tour gift with our last show with him back in April. Throughout the tour, we had been talking about guitars. One day on the road, we talked about Stratocaster from the city. It was called the Mary Kaye Strat, it had this pink wash to it. It had gold hardware. I won’t go completely guitar nerd on you,” she laughs again, “It was a really pretty guitar. At the end of the tour for the last show, Brad came to me and built me my own version of a Mary Kaye Strat.  He’s incredible, I mean, I know Brad is pretty busy in his day job but if ever he is looking for a second career, I really feel like guitar building could be it. He’s really good at it!”

Anybody who has followed Lindsay Ell’s career will, no doubt, be aware of her incredible work ethic.  Continually touring (and not just as a soloist, she is now even performing pop-up gigs with Kristian Bush under the monicer Speakeasy Social Club), writing, recording yet always taking time with her fans.  Her social media could document the world’s airports and airlines pretty well.  So how does she cope?  It looks as gruelling as any artist we have seen.  “I love what I do so much,” she declares without any hesitation.  “The fact that I can wake up and get to do everything I love for a job and call it a job is something that I  hope I will never take for granted. Yes, it is a lot of travel and at times, it gets a little exhausting. Again, I just feel so grateful that I can even do this. You just learn to love all the aspects of it in different ways. We get to see different parts of the country, different parts of the world every day of the year.”

“I remember the little girl dreaming of being on the road every single day, and now I’m getting to live that life. I’m super, super happy.  It’s worth it.”

Lindsay Ell headlines at Night and Day on Wednesday 17 October 2018.