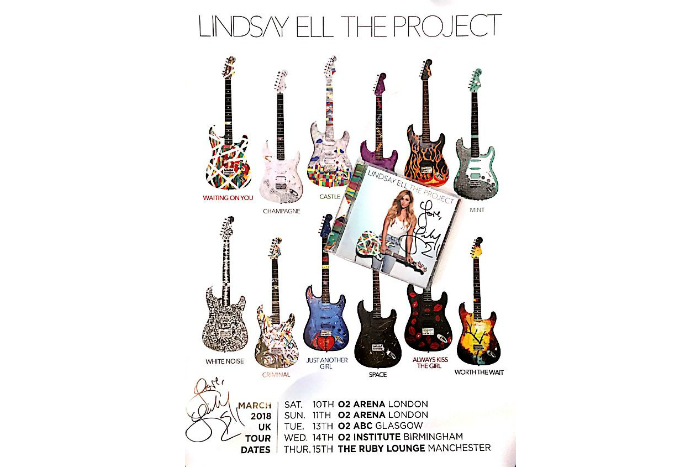 Linday Ell makes her return to Manchester in October for a gig at Night And Day.  One of the best guitarists we have ever seen, the singer, songwriter returns to the city after incredible shows at The Ruby Lounge.

Lindsay Ell will headline at Night and Day on Wednesday 17 October 2018.

The Canadian country artist, who is heavily influenced by rock, blues and funk, comes back to the UK for two gigs following the UK release of her The Project album, tipped as Billboard’s Best Country Album of 2017.  This was followed shortly after by the release of her The Continuum Project , her own cover of John Mayer’s Continuum album.  The dates also follow the huge success of her recent single Criminal.

Always one to embrace an unconventional approach, Lindsay Ell last appeared in the city in March performing alongside Kristian Bush of Sugarland in a joint headline gig at The Ruby Lounge.  In a fantastic show with no setlists, the two took to the stage together performing in turns and jumping in on each other’s tracks with no warning of what each was going to do.

We were fortunate to speak to Lindsay last week, so watch this space for the interview coming soon.

To celebrate Lindsay Ell coming to Manchester, we have a signed poster and CD to give away to one lucky fan.  To enter simply follow us on Twitter and retweet this tweet:

It's competition time!
To celebrate @lindsayell coming to Manchester's @nightanddaycafe we have a signed CD and poster to give away. To enter simply follow us and retweet this post by midday on 1 October
T&C on website.https://t.co/KybckaGlWt

It’s competition time! To celebrate Lindsay Ell coming to Manchester’s Night & Day Cafe we have a signed CD and poster to give away. To enter simply follow us and like this post by midday on 1 October T&C on website.

The winner will be selected at random at midday on 1 October.  All entries are subject to our competition terms and conditions.  This competition is open to UK residents only.