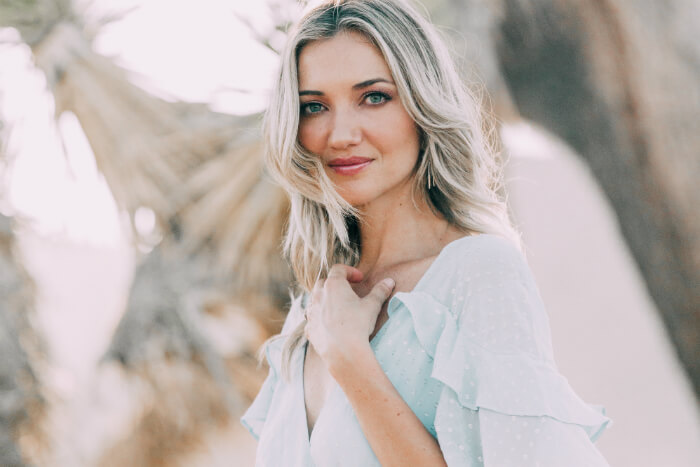 With her new album Wonderland set to be released shortly, Sarah Darling heads out on tour with a return to Manchester for a gig at the Deaf Institute.

The tour marks a return to the city for the Nashville based Sarah Darling after previous performances at Night and Day and the Deaf Institute itself, where she supported Ward Thomas.

The run of dates also follows a series of performances at the Country to Country Music Festival in London.

We caught up with her to chat about Wonderland, her evolving musical style and taking the decision to record the entire album in her home away from home, the UK.

Sarah Darling took the step of recording Wonderland entirely in the UK.  The decision followed a period in which she adopted the UK as a home from home.  Regular performances, features in the UK’s country music press, and returns to London’s C2C Festival have all helped her build strong relationships here and, of course, she has plenty of fans on this side of the Atlantic.

But why did she choose to record the whole album here?  “Musically, I think, when I released Dream Country and it really connected in the UK, a part of me wanting to do Wonderland in the UK is just to push the boundaries of what I had been doing musically and to see what would happen when I brought my country roots to the UK and collaborated with producers and writers in England,” she explains.  And the resulting album shows a whole different side to Sarah Darling.  “It has turned out to be such an amazing project just because it’s nothing like Dream Country. I think there is lots of me running through the whole album.  It’s just a different side of it which has been really, really neat to see and to watch come to life. Part of me, making that decision is because I’ve spent so much time in England and it feels like a second home and I wanted to see what happened when I made a country album in England.”

The album has seen her working with Jim Elliot as well as production duo My Riot at RAK studios.  She split her time between recording half the record in the countryside of Wales (with Jim Elliot) and based in a studio in London.  Co-writes included Pete Hammerton (who has collaborated with Kylie, James Arthur and Paloma Faith to name just a few) on Fire and Jessica Sharman (Ward Thomas, Aine Cahill, Liv Austin) on the excellent track Diamonds.

Recording Wonderland in the UK was certainly a learning experience for Sarah Darling.  “There are some interesting things that I learned about myself. I think logistically, I’m from Nashville, we have a certain way of doing things and going into the studio. I think just traveling to places was interesting – I wasn’t used to the pace of life of doing a record that way. Then secondly, I would say I’m just such a lover of real instrumentation. I found what was great about me working with the producers that I worked with, is they really wanted to bring that world into what they were doing.”

There certainly was an element of Nashville meets the UK though.  “I had my favourite guitarist from Nashville play some parts and we added that into the music because I have to have certain real instruments in my music, like a running thread.” she explains, “That was something I learned – that there are definitely more computers involved in music than the real instrumentation that I’m used to. I learned how to combine it together, to fit into what I’m doing. That was really cool.”

In Interview: Ward Thomas on Restless Minds, touring and the sleeper bus

Wonderland looks at Sarah Darling’s time in the UK, chasing her dreams, and highs and lows that she has experienced.  “It’s telling the story of me being there in England and the struggles and the highs and the lows of it,” she opens up, “Timelapse, for example, I wrote being on a train to Waterloo and realising that, wow, time is going incredibly faster than I had ever imagined. Fire, which is one of my favourites is really written about that dream, chasing that dream when things are hard. I think it really tells the story of me being across the pond and what that felt for me. Also, the highs of it … Blue Sky and Shine are really, really uplifting and I felt like a mix of all kinds of emotions when I was making the project. It covers all of that.”

“I think anytime you decide to make a country record somewhere else in the world, it’s going to evolve”

The album also shows a new side to Sarah Darling’s sound, evolving substantially from previous release Dream Country.  “I think anytime you decide to make a country record somewhere else in the world, it’s going to evolve” she tells us. “I love the whole idea that I’m taking what I’ve learned over the years of my life in Nashville and just walking into RAK studios and putting beats and things that I would’ve never thought would work with some of these songs.”

“It’s definitely taking a twist. I think the music is much more fun, upbeat. I describe it and people who have heard it say it feels like … a road trip, which is quite fun. A lot of the songs make you feel just light and happy. That’s a little bit different in Dream Country because Dream Country was quite emotional for me when I wrote it, because it was after I left a record deal and didn’t really know what I was doing and a whole different subject matter. For this album, it felt like this whole new adventure was happening and I was writing about those experiences in front of my eyes.”

The experience of recording the album away from Nashville has opened her up to the possibility of repeating the process.  “I told a friend, ‘Now that I’ve done this, I’m going to have to record in France or something.’” she laughs, “Go somewhere else in the world and that’s probably going to be my new thing, making country records all over the world. … See the world in the meantime?  Great! Good plan!”

It seems that the biggest stumbling block for the album has come from an unexpected source.  The well documented difficulties Pledgemusic are causing artists at the moment have struck Sarah Darling too.  “Unfortunately, that was a shocker to me,” she admits.  The issue has knocked some of the preparations, but she’s determined to approach it with positivity.  “It’s definitely changed timing,” she continues, “which is not a huge deal. It’s not by much. The album is finished and all mastered and all those things.  My priority are my fans. I just didn’t want anyone to think, “I’m not getting my T-shirt or I’m not getting my signed lyrics.” I love all the people who took the time to want those bundles.”

“It was a shocker to, I think us all.” She continues, “I wanted everyone to rest assured that we’re going to turn lemons into lemonade and it’ll turn out even better than it was before. I just had to step back and say, I’m not sure what’s going to happen with them (Pledgemusic). I have to proceed without them even being a part of it anymore.”  As she tells us that she knows many people who have been struck by the same issue, you can tell that it’s been a huge concern to her about the effect it has on fans.  “It’s really sad for the fans … it’s just really unfair to the fans and the artist actually because they steal that joy of them being part of something from the ground up.”

After releasing Call Me from the album, she’s been busy planning out the next stages.  Some instant grat tracks and a ‘special project’ which will be something extra that fans aren’t expecting are to follow.

As soon as she’s finished performing at Country To Country (she’ll be performing multiple sets including the Bluebird Cafe, BBC Radio 2 Stage and C2C Sessions), Sarah Darling is back on the road.  The tour brings her back to Manchester’s Deaf Institute.  It’s clearly a venue which made an impression on her last time as she declares her eagerness to perform there again.  “The fans can expect a very high energy show” she tells us.  “The goal is that we create Wonderland live, what’s on the album. It’s just a really fun show. I actually tried out the show in Nashville a few weeks ago and it was the most fun show I’ve ever played. I’m pretty excited about bringing it on the road. It’s a great show.”  She tells us that the set will include some of her classics and favourites.

The set will, obviously, also include material from Wonderland, which some fans may not be familiar with.  Does that make her nervous at all, a lack of audience familiarity?  “I have what I call good nerves” she explains, “any time we do something new.  I remember I had this feeling about three weeks ago when I did a full band show of Wonderland in Nashville. I was completely full of nerves. Ideally, when you’ve done something new and you’re getting ready to share, it’s almost like sharing a secret or this surprise with everyone and you don’t know how everyone’s going to respond because it’s something you’ve been working on and crafting and travelling for a year. I’ve been working on it for a year. I think it comes with just being super proud of it and wanting people to love it as much as I do. It’s where it really comes from. It’s a very genuine place.”

When does Sarah Darling headline at Manchester’s Deaf Institute?