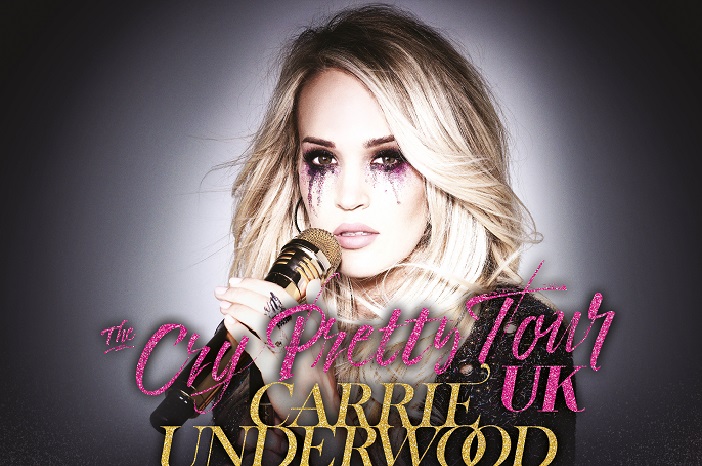 The Cry Pretty Tour UK follows the release of her sixth studio album Cry Pretty.  She will be joined on tour by The Shires, the biggest selling UK country act of all time.

The Manchester Arena gig marks a return to the UK for Carrie Underwood who has previously performed at the huge Country To Country Musical Festival with headline performances in 2013 and 2016.

In Interview: Catherine McGrath: “everything is so surreal”

Carrie has amassed over 100 major honours, sold 64 million records worldwide, and recorded 26 #1 singles, 13 of which she co-wrote, with a catalogue of songs that has been streamed nearly 3 billion times worldwide.

Carrie’s latest album Cry Pretty debuted at No. 1 on both the Billboard 200 and Top Country Album Charts and was the biggest all-genre debut by a female in 2018. The debut earned Underwood a place in music history as the only woman to land four country albums at the top of the all-genre Billboard 200 chart, as well as the first female country act to top the Billboard Artist 100 Chart. The critically-acclaimed, US gold-certified album, was the best-selling Country album debut of 2018, as well as the biggest Country album debut since 2015 and the biggest female Country album debut since 2012. The album’s lead single and title track, “Cry Pretty” was released in April 2018 and debuted as the #1 song in the U.S. all-genres chart. The song also topped download charts in 38 countries around the world and amassed over 3.5 billion social impressions across 66 countries during its first week.

When does Carrie Underwood headline at Manchester Arena?

When do tickets for Carrie Underwood’s Cry Pretty UK tour go on sale?

Tickets for Carrie Underwood’s Cry Pretty UK tour including Manchester arena gig go on sale at 9am on Thursday 7 March via Gigs and Tours and Ticketmaster.