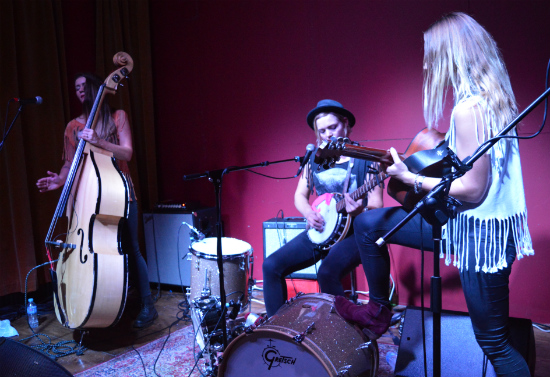 Swedish sister band Baskery have been described as everything from Americana to folk to punk blues to alt-country.  The truth lies in all of these as the band transcends genres to produce truly unique music, which they recently brought to Gullivers in the NQ where the crowd were taken aback by the stunning performance put before them.

Sisters Greta, Stella and Sunniva have actually been performing together for quite some time now, originally with their father when they were in their teens and touring as The Slaptones.  Now, setting out on their own they have released three excellent albums and carved a reputation for their outstanding live shows, where the varied nature of their albums and sound comes to life with an effervescent energy and attitude which provides the perfect foil for their ingeniously crafted songs, whilst keeping the crowd on their tours.  At Gullivers they did not disappoint, living up to the hype which is following them around.

We caught up with Greta, Stella and Sunniva backstage to ask about touring and the deal they have recently inked with Warner Brothers.

How’s the tour gone so far?

Greta – This is the third show.  So far it’s been fun.  We’ve played London and Kingskerswell – it was in a church, which was really different, but it’s been good.  It’s great to be back in the UK.

How does touring now compare with your earlier years with the Slaptones and your father?  Is it really different?

Greta – It’s kind of a consistency.

Greta – There can be different levels of touring.  It could be different comfort in travelling or in bigger parties or smaller parties depending on what kind of tour you do but the essence of a tour is always the tour.

Sunniva – I would say that things have changed a lot because of social media.  Before you could really be incognito.  You could go on tour and nobody would know and now you have to always keep posting stuff and for example the fans in the US can follow us on tour and they remember ‘oh you went there’, and when we ask how they remember, it’s a social media thing.  It gets more global.  Ten years ago there was no instagram and hardly any facebook.

What’s your favourite part of touring?

Sunniva – I would say just the live for the day philosophy and not having to think about what’s going to happen the day after tomorrow.  Just today and tomorrow are your priorities.

Greta – You don’t have to clean your house!

Greta – But do you clean anyway, that’s the question?

Sunniva – You don’t need to have a house.  We know bands which give up their houses when they go on tour.  At the moment, we are between homes, so we can call this the gypsy tour!  But it’s nice, just to know that you’re going to be at the venue at a certain time and that’s your priority and all other problems and troubles can be left behind, because you just have to be there for the next show.

Greta – Touring is quite an adventure.  You never know what you’re going to encounter on the road or at the venue, who the audience is going to be from night to night.  As Sunniva says, it’s day to day life, you live for the day, but it also throws a lot of surprises out there for you, which you never get tired of – well some of it you get tired of definitely, like dragging your shit around everywhere is pretty tough.  That’s when you feel like you have gathered a lot of stuff to drag around and you kind of regret that at times.  Except for that touring is always going to be fun.

So, you’ve recently signed a deal with Warner Brothers.  How did that come about?

Greta – It was a fairy tale.

Greta – If you look at it from the outside, it felt like a fairytale because it was just like the old fashioned way when you actually get approached by a record label.  They approach you and you’re like ‘this is not happening’ and you’re not actively looking for a deal with a major label.

Sunniva – When you get more or less scouted.

Greta – The A&R’s actually out there looking for bands and that doesn’t really happen anymore.  Well it doesn’t feel like it anyway.  So that happened with us.  We were actually scouted, headhunted by this person and we had a good meeting in LA with this person as well and it was the right time with the right person and right contract for us to go in with a major.  Hard work of course.

Sunniva – It’s good to feel like you get rewarded for your hard work because Warner just said ‘you have everything, you’re ready to go, we’re going to give you a budget to make a record but you can choose your own producer and if you want to be in England, be in England’ is what they basically said.  It’s not like the myth of the industry which is that you get signed and somebody’s taking over everything.  We can still remain true to our individuality.

Stella – Yeah, it’s in the deal that we have 100% creative freedom.

Sunniva – Which means that if the album is shit, it’s our fault!

Stella – But that’s how we wanted it, as we feel that we have a pretty unique sound and obviously the guy at Warner, who is actually the president, he feels that too, that we have something very unique and he completely trusts in us and is like ‘it’s up to you to pick a producer, a studio or if you want to produce it yourselves’.  He trusts in us and that’s a pretty good feeling.

I was going to ask, with three albums already under your belt, whether the deal with Warner Brothers would mark a change in direction.

Greta – Well, it will mark a change in direction, because we are constantly changing our sound, but not to be mischievous or ‘ha ha you didn’t realise we were going to do that’, but because it’s a natural progress.  I think we’re too restless to linger in a certain genre or a certain type of song writing.  If it’s going to sound different, it’s because we want it to sound different.

Sunniva –  I hate to think the fact that when people hear our next record they will say ‘oh, they wanted to go mainstream and they signed with Warner’.  It’s just the time on the road has distinguished what we are and what we need to do and we feel that we love the folk scene everywhere in the world, it’s great, but we love good music and pop music, and we wanted to be a healthy alternative to what was played on the radio, but now we just feel that we also want to be played on the radio, it just changed a few things and we can’t go there without a major label – it’s very hard at least.

Greta – Some people get the chance.  It’s timing and luck to be picked up on the radio if you’re not carried.  There are very few songs which have been played on the radio which haven’t been because there was a plan behind it.  And we’ve never been a part of any plan so we think maybe it’s time where we think maybe we should think about ourselves a little bit more and not be so humble about everything.  We’re doing something good and maybe we try to present this to a broader audience and not be so narrow and focus on the small folk scene, which is quite a small scene still.  So we just want to widen our perspective and there’s proof that if people think we’ve changed, the demos prove that we were changing before Warner was introduced.

Whereabouts is the new album up to?  Are there any timescales?

Stella – There is a plan.  We had a plan and talked to the guys at Warner and their plan was basically the same.  After this tour in the UK, we’re going back to America to start the pre-production and possible the recording already in November.  And then we promised our Mum and Dad we’d be home for Christmas!

Greta – A Christmas break will be nice and then we hope to get started again in January.

Stella – We hope to get started before the end of this year.

Sunniva – Yeah, the plan internally and officially also is that we want to have the release before the Summer.  It’s optimistic, but things can happen.

Any final words for your fans?

Come out and see us wherever you are.  We’re here for you now.  We’re not here tomorrow!  So if you’re intrigued, just look up where we are and come and see us.

We’re just trying to be more than just music.