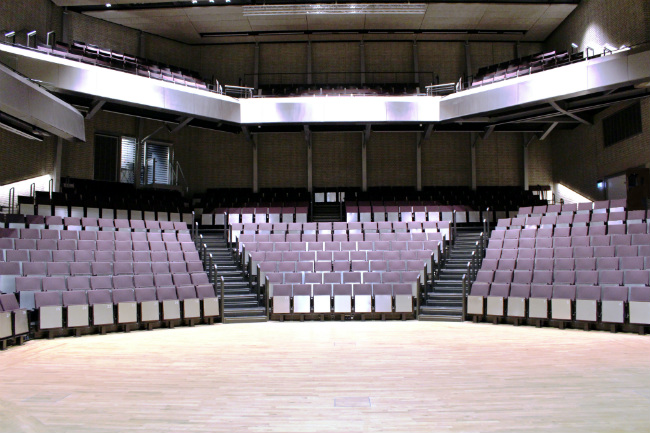 After ten months of work, 515 tons of waste being removed and 55 tons of steel being brought in through one entrance, Manchester’s Royal Northern College of Music is set to re-open its Concert Hall tomorrow, Thursday 6th November, following a £7.1 million refurbishment designed by architect Ian Palmer and undertaken by Styles&Wood.

The re-opening of the Concert Hall is set to witness a concert by acclaimed British baritone Sir Thomas Allen.

Refurbishment work to the Concert Hall commenced in January 2014 as part of a larger redevelopment project, which has included reconfiguration of the backstage areas of the RNCM and Theatre, new dressing rooms and changing rooms, the creation of a conference room, student deck, seminar room and new practice pods and an increase in the size of the RNCM Lecture Theatre which has now been renamed the Forman Lecture Theatre in honour of Sir Denis Forman, following a grant from The Granada Foundation.

The Concert Hall itself has been fitted out with a new air-conditioning and heating system, new flooring and seating, advanced technical lighting and facilities, a new balcony and raised floor area which will bring increased capacity and the addition of the Oglesby Balcony, supported by the Oglesby Charitable Trust.

The refurbishments are also set to support higher student numbers and enhance professional learning at the RNCM, which was founded in Manchester in 1972.

Professor Linda Merrick, RNCM Principal, commented ‘We are thrilled that the Concert Hall is ready to reopen following an exciting redevelopment project; the extensive work undertaken by Styles&Wood is exceptional and has surpassed all expectations.’  She continued ‘The College prides itself on offering the very best facilities, not only to aspiring young musicians from all over the world, but also to audiences who recognise the significant position the RNCM holds as one of the UK’s busiest and most diverse public performance venues.’

Professor Merrick added ‘It goes without saying that the project would not have come to fruition without the invaluable support of everyone who backed our Concert Hall campaign, Your RNCM.  Since its launch at the beginning of the year we have been overwhelmed by the number of supporters who have given so generously.  It is wonderful to know that the work we do here in Manchester is appreciated so highly, and I am looking forward to seeing everyone’s reaction to the finished project over the coming weeks’.