In Review: Guys and Dolls at the Palace Theatre 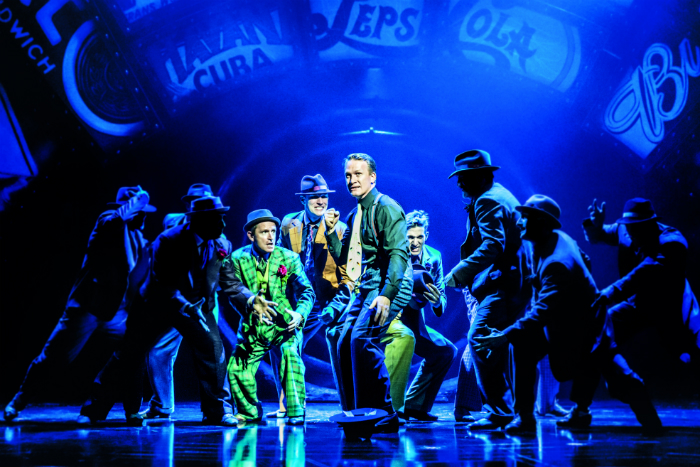 Guys and Dolls has proved to be one of the most popular musicals of all time, regularly featuring in lists of the top and favourite productions.  It’s easy to see why, with its winning combination of humour, romance, dance and catchy songs.

The latest tour of Guys and Dolls, directed by Gordon Greenberg and choreographed by Carlos Acosta and Andrew Wright, has just opened in Manchester and is set to run at theatres around the country until July 2016.  On the evidence of this performance, it will no doubt be a highly successful tour.

Opening with a bang and a flash of light, we are introduced to the hedonistic sub-belly of New York, where gangsters, petty criminals, police and sailors all interact, filling the stage with energy-fuelled dance.  But also making an appearance is Sergeant Sarah Brown a missionary determined to save souls.

Against this background of Sarah Brown trying desperately to show sinners the error of their ways, Nathan Detroit (played by the excellent David Haig) is attempting to find a venue for a game of craps at a time where a number of heavy hitting gangsters and high stakes gamblers including Sky Masterson (Jamie Parker) are in town.  There’s just the problem of raising the money to pay for the venue, which drives him into waging a bet that Masterson cannot get the incorruptible Sarah Brown to travel to Havana with him the next day – a bet which is accepted.  Of course there is no way Brown would accept unless she had no choice in order to further her efforts to rid New York of sin.  As expected, bets and lies lead to love at a time when Masterson and Detroit (who has been engaged to Miss Adelaide, finding excuse after excuse not to marry for some time) declare that they are the type of guys who cannot be tied down to dolls.

The individual performances in Guys and Dolls are exceptional.  Siubhan Harrison in particular proves on several occasions to have stunning vocal ability and plays the role of the pious and hopeful Sarah Brown perfectly.  Jamie Parker also performs exceptionally as Masterson, applying plenty of humour to a role which moves from shady gambler and chancer to hopeless romantic.  His singing of the iconic Luck Be A Lady is also perfect and thrills the audience who have been clapping through the whole of the show.  Indeed the chemistry between Harrison and Parker is delightful as are their duets.

The major comedy moments are provided by Haig and the excellent Sophie Thompson as Miss Adelaide.  In particular Sophie Thompson excels in her rendition of Adelaid’s Lament, although that is just one moment in a performance of undeniable quality.  She brings a lot of fun to the role, and her interactions with Detroit are a delight to watch as he writhes, wriggles and tries to escape the shackles of marriage for as long as possible (in fairness he has done a pretty good job over the last 14 years!).

Whilst the focus of Guys and Dolls may well be on the central four characters, there is no doubting the impact of the whole cast.  Gavin Spokes as Nicely-Nicely Johnson almost steals the entire show with his rendition of Sit Down, You’re Rockin’ the Boat which is exceptional and leads to cheers from the audience; Nic Greenshields as the infeasibly large and intimidating gangster Big Jule also provides many humorous moments; and Benny Southstreet’s (Ian Hughes) comedy moments with Nicely-Nicely Johnson are all well received by the audience.  In fact one of the stand out choreography pieces of the performance comes in the riotous Havana which throws a Latin flavour in to the mix as the ensemble cast give an outstandingly energetic dance performance, which was very well-received by the audience, as the relationship between Masterson and Brown first shows signs of becoming something more than a necessary evil on both sides.

As the curtain comes down on the performance, the audience has witnessed why Guys and Dolls has become such a popular show.  The humour, songs and performances have all hit home and there is no doubt that the tour will prove to be a great success.

Guys and Dolls is at Manchester’s Palace Theatre until 21 November 2015.