In Review: Anything Goes at Manchester Opera House 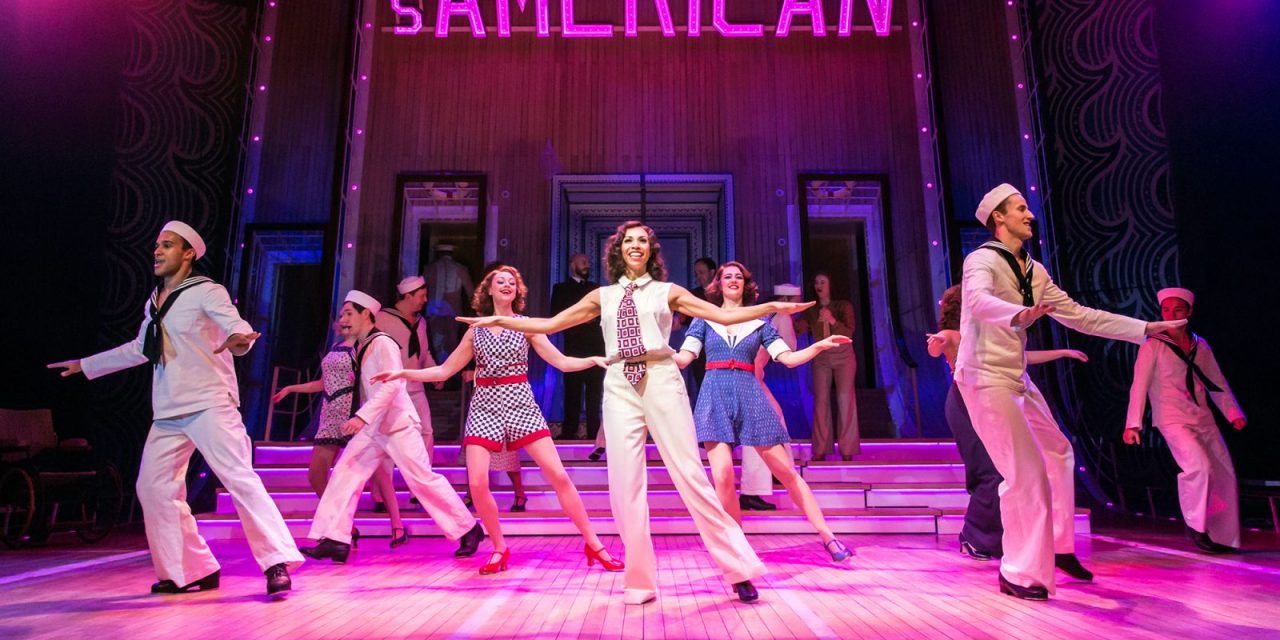 Cole Porter’s musical, Anything Goes, centres around the character of Billy Crocker (Matt Rawle), a cast upon Wall Street broker, who has fallen madly in love with socialite Hope Harcourt (Zoe Rainey). Alas Harcourt is set to be married to the English Lord Evelyn Oakleigh, which Billy discovers upon accompanying his hugely successful boss Elisha Whitney (Simon Rouse) to the SS American, leading him to stow away in a desperate attempt to win her affections.

Of course, these things don’t go smoothly, as also stowing away on board is not-so-infamous gangster Moonface Martin (Shaun Williamson), leading the two to exchange stories and attempt to help each other, leading to a huge case of mistaken identity, a touch of jail time and humorous interactions with Chinese evangelicals, passengers keen to do some celebrity spotting and standout character Reno, the evangelist turned nightclub singer who happens to be a friend of both Billy and Moonface. Cue confessions, declarations of love and huge demand on the Captain to conduct marriages.

All of this plays out in front of a stage setting wonderfully designed by Richard Kent, which shifts easily and effectively from bar to cruise liner to jail cell and back to cruise liner, looking impressive throughout the whole show. And in a nice touch the musical comedy actually begins subtly without a curtain raise and before the audience has even taken to its seats with characters milling around the bar to the sounds of jazz music being gently played on stage, before the opening scene actually takes place, a pattern which is repeated during the intermission.

But it’s the musical numbers which have the audience enthralled and Porter’s work is filled with musical gems, which are shared around between the talented cast, although Debbie Kurup as Reno steals the show with a standout performance, both musically and also with impeccable comic timing.

From a slower, casual version of I Get A Kick Out Of You through to a raucous Blow, Gabriel, Blow opening up the second act, Kurup is on top form, dazzling throughout.

The focal characters of the show, Billie and Hope, also share a number of pieces, and Rainey in particular shows herself to have an angelic voice to go along with her lovable personality which shines throughout the work.

But the comedic moments work best, and whether it’s excellent amusing moments on the part of Rouse who plays an excellent Elisha Whitney (slightly eccentric, all too happy with a drink in his hand and desperate to woo Harcourt’s mother), or in the numerous songs which raise a chuckle and occasionally an eye, it keeps a smile on the audience’s face. Stephen Matthews as Oakleigh particularly puts in a fantastic effort during the hysterical, almost show stealing piece The Gypsy In Me, which raises the largest cheer and laugh of the night. Williamson too shows his ability in a comical duet with Kurup, the excellent piece, Friendship.

Throughout the production the choreography of Alistair David is excellent, with some phenomenal tap routines punctuating the evening, with Reno and her chorus of Angels in particular showing excellent skills, energy and enthusiasm during Blow, Gabriel, Blow.

With a strong score, excellent performances all round, stunning stage settings and choreography and a nostaligic appeal, Porter’s Anything Goes held the audience throughout, dazzling and raising plenty of laughs.