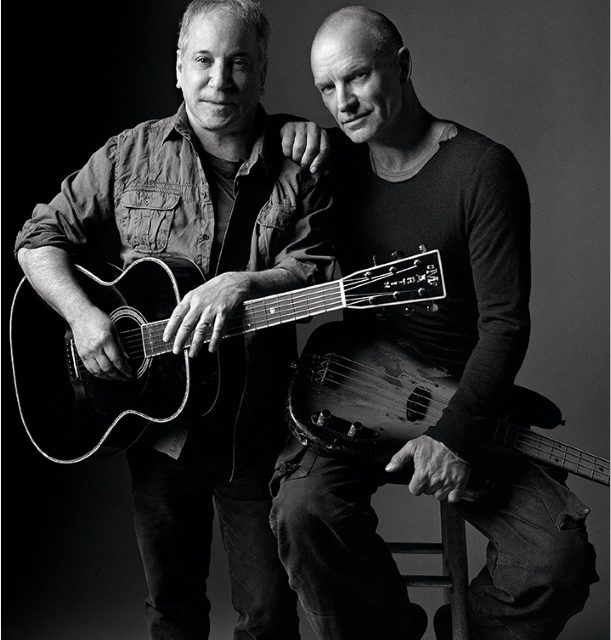 The Shires (Crissie Rhodes and Ben Earle) recently became the first country band to chart in the Top 10 of the UK Album Charts with their debut album, Brave, not long after becoming the first UK signing to the re-launched Decca Nashville label.  Following stellar Manchester appearances in the last six months, co-headlining with Ward Thomas at Band on the Wall and supporting huge US outfit Little Big Town at The Ritz, it’s no surprise and we can be sure that the gig will delight fans and newcomers alike.    Tickets £12.

Paul Simon and Sting, iconic, prolific and critically lauded, have been long time friends and came up with the concept for the On Stage Together tour at the Robin Hood Foundation benefit in 2013 where they first performed together and took the tour to the road in North America to great acclaim with 30-plus song sets featuring hits and favourites such as Boy In The Bubble,Fields of Gold, Driven To Tears, Mother & Child Reunion, Desert Rose, Every Breath You Take and more.  The concerts will feature the two musicians blending their voices and bands to perform songs both together and individually.  Tickets £45 – £125.

Having released their self-titled fourth album in October, Lower Than Atlantis head out on an 11-date tour and appear at Manchester Academy.  Lower Than Atlantis was billed as their most ambitious album to date, recorded in their own studio in Watford and produced by Dan Lancaster to fizzle with musical ambition, lyrical wit, crossover potential and carpe diem spirit.  With a touch of electronic, strings and dance beats, it’s a slight step away from their visceral roots, and opens them up to a wider audience.  Tickets £12.00.

With country music becoming a bigger and bigger part of the music scene at the moment, it’s no surprise that another one of this week’s gig tips comes in the form of two up and coming country music acts, the UK’s Sasha McVeigh and American Sonia Leigh.  The British and American singer songwriters have each been making an impact on both sides of the Atlantic and performed at the C2C Country 2 Country Festival at The O2 in London, to audiences that packed out their sets on both the Saturday and Sunday. And now fans get the opportunity to see the two powerhouse artists to embark on one, big co-headline tour of the UK and Ireland.  Read more about the two talented artists here.  Tickets £7.00.

The tightly wound punk-metal of Troublegum propelled Therapy? into the UK Top 5, sold 750,000 copies worldwide and spawned no less than five Top 40 singles (Turn, Nowhere, Die Laughing, Trigger Inside and Screamager, the lead cut from the 1993’s Shortsharpshock EP), landing the band a Mercury Music Prize nomination in the process. More than 20 years later, they are still rocking it with the best of them and only two weeks ago released their fourteenth album Disquiet, which fans have quickly taken to and given an outstanding thumbs up.  Support comes from Thirty Six Strategies. Tickets £17.50.

Stockport’s Natalie Findlay performs again in Manchester, following her last sell-out gig, as just one of two April dates. 2015 has started with a bang – already she’s released new track Electric Bones to a positive reaction. The song was picked up as XFM’s Shock Of The New. Previous songs Off & On and Greasy Love got lots of support from both XFM and BBC 6 Music and justifiably so. With a dirty indie pop sound which features plenty of blues influence, Findlay has proved herself capable of delivering some knock-out tracks.  Tickets £8.00.

In Review: Lindsay Ell at The Ruby Lounge
In Review: EofE and Glamour of the Kill at Sound Control
In Interview: UK Country Music Album of the Year winners Ward Thomas