In Review – The Last Tango 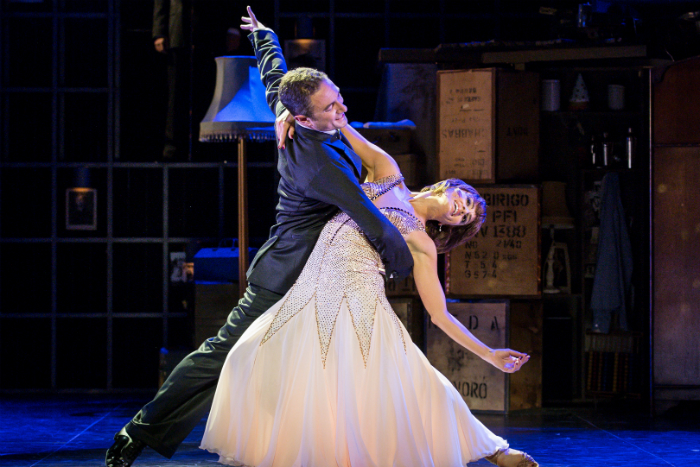 The Last Tango is the third and final stage show from world Argentine Tango Champions and Strictly stars, Vincent Simone and Flavia Cacace.

Following the sell-out success of their hit shows, Midnight Tango and Dance ’Til Dawn, their final production sees them telling the tale of a couple from their first meeting until their last tango together.

The show opens with the brilliant Teddy Kempner, playing an older Vincent, sorting through his belongings and reminiscing about his life and love, Flavia.

Kempner guides the audience through the tale of their first meeting, courtship and marriage with equal doses of sentimentality and humour that keeps the emotional storyline balanced and the audience lapping up the comic sparkle provided by his character.

In scenes that are seamlessly woven together in a cleverly choreographed tapestry of dance, music and costume changes, we are treated to a showcase of dance styles that span jazz, swing, salsa, rumba and of course the tango.

The story spans both pre and post-war Britain and effortlessly takes the audience on a journey covering the highs and lows of the couple’s life from their very first meeting, through to marriage, war time and post-war events, via a mixture of captivating dance and musical pieces. The Last Tango allows not only the stars of the show, Vincent and Flavia, a chance to shine, but also the fantastic ensemble and orchestra who accompany them. Matthew Gent in particular deserves a mention for providing wonderful vocals on numbers such as Moondance and Save The Last Dance For Me, as do the whole ensemble for their energetic, enthusiastic performances of Boogie Woogie Bugle Boy and Mr Pinstripe Suit.

By far the highlight of the night though, is the finale – a skilful, passionate Argentine tango, demonstrating exactly why Vincent and Flavia were world champions in the discipline. The audience is brought to their feet, giving The Last Tango, a well-deserved standing ovation.

Cast Details Announced for Inkheart at HOME
In Review: Musical Bites by Jazzgalore at the Dancehouse Theatre
In Review: Flash Mob at the Lowry Theatre