In Review: Dirty Rotten Scoundrels at the Opera House 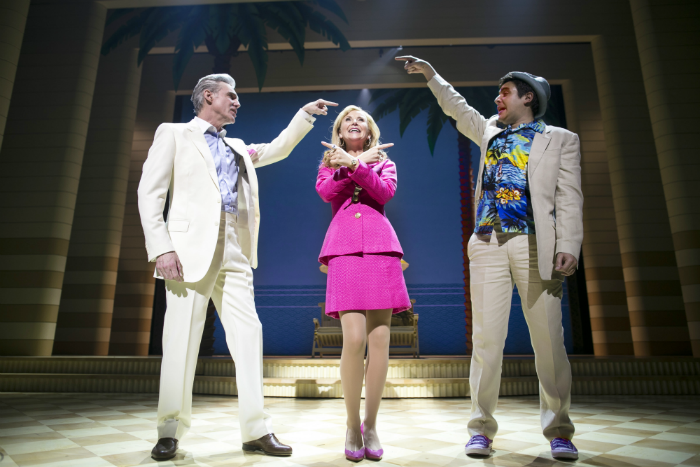 A trip to the French Riviera is quite something.  The glitz, the glamour, the fashion … the cash.  And Dirty Rotten Scoundrels has all of these in abundance.  And on top of this it’s absolutely hilarious, truly a five star show.

Based on the film of the same name starring Steve Martin and Michael Caine, Dirty Rotten Scoundrels tells of the rivalry which develops between the established, sophisticated conartist Lawrence Jameson (Michael Praed) and brash young upstart Freddy Benson (Noel Sullivan) when they both find themselves working the same resort of Beaumont Sur Mer.  Although initially taking Freddy under his wing, seeing the opportunity to teach him the art of the con as an intriguing challenge, much to the chagrin of his partner in crime Andre Thibault (Mark Benton), Lawrence quickly sees the relationship become a rivalry.  And it is one which is magnified by the arrival of the beautiful ‘Queen of Soap’ Christine Colgate (excellently and delicately played by Carly Stenson), who quickly becomes the object of both their schemes and affections as they seek to out-do each other at every turn, with hilarious interactions and consequences.

Dirty Rotten Scoundrels is a romp from the outset.  It is set to an impressive musical score, full of humorous songs penned by David Yazbek. 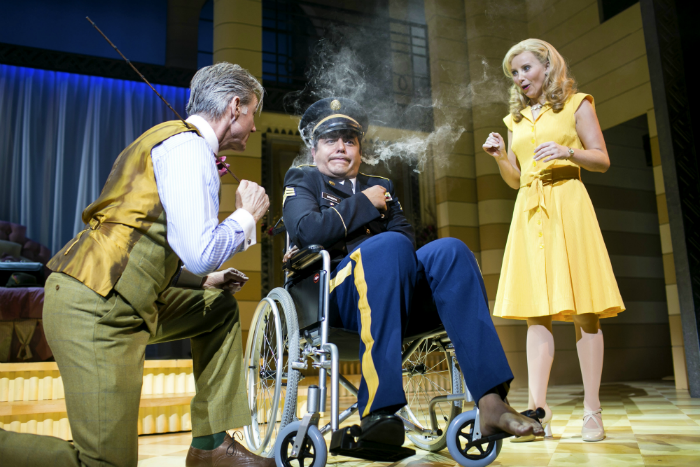 The talented artists quickly have the audience in their palms.  Praed is perfectly cast, debonair, sophisticated, charming and able to con gullible women out of their savings whilst still coming across as likeable to the audience.  And whilst his character may talk of having high emotional walls to shield him from developing feelings, his performance easily and deliberately shows the fallacy of this approach.

Sullivan, whilst playing a brash, uncaring character, desperate for a quick payday, also manages to keep the audience onside.  Virtually the antithesis of Praed’s character, his portrayal of Freddy Benson is excellent – energetic, busy, cocky, and yet exhibiting a slight undercurrent of vulnerability, which comes to the fore now and again.

But the excellent performances of the two leads are just the tip of the iceberg in this show.  It is filled with talent, whether it’s Mark Benton’s hysterical comedic moments as Thibault (he even gets the opportunity to show off his dancing skills), Phoebe Coupe’s hilarious turn as Jolene in the excellent, raucous number Oklahoma? which is matched by two more truly laugh-out-loud pieces (All About Ruprecht and Ruffhousin’ mit Shuffhausen) or Geraldine Fitzgerald’s amusing Muriel Eubanks, a character initially obsessed with Jameson who quickly finds herself enjoying some amorous moments with Thibault. 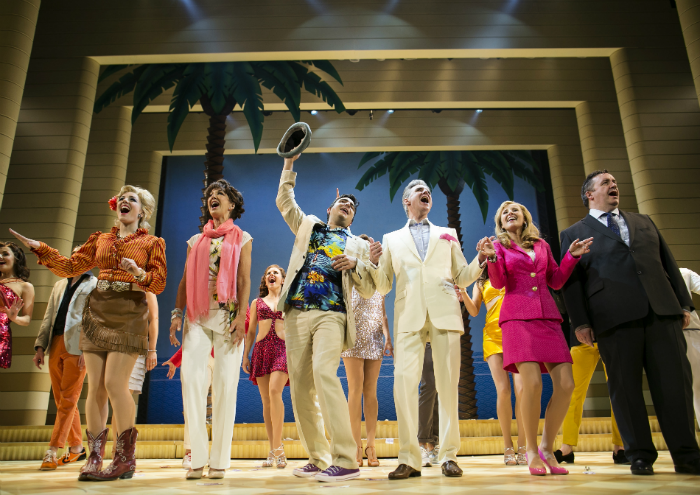 Not to be left out, the swing also perform magnificently, singing and dancing with tremendous energy and accuracy, and are even found popping up in the midst of the audience, with Emma Caffrey surprising the audience by taking on the role of an usherette to amusing effect, bursting into song and wowing the enthusiastic crowd.

In truth it’s impossible to pick a standout performer, as each and every single one is outstanding.

Performed on an excellent interchangeable and varied set designed by Peter McKintosh, it is also filled with some magnificent costumes, bringing the glamour of the South of France home to Manchester.

Whether it’s the singing or the comedy,  Dirty Rotten Scoundrels is a winner through and through.

Dirty Rotten Scoundrels is on at the Opera House until Saturday 30 May 2015.  If you’re a fan of musical comedy, don’t miss it!