In Review: Dreamboats and Miniskirts at the Palace Theatre 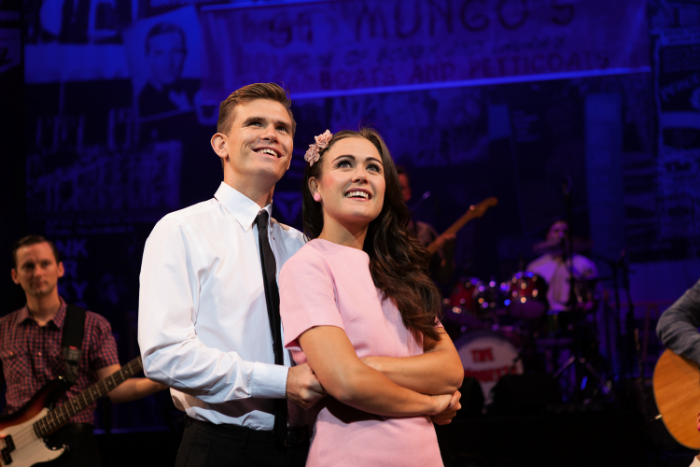 Thirty-eight hits of the sixties, woven together by a plot designed to fit in with the music, sung gloriously by a young energetic cast.  Dreamboats and Miniskirts, the sequel to the 1950s set Dreamboats and Petticoats, doesn’t exactly have the most complex of plots, but what it lacks in depth it certainly makes up for in 60s hit after 60s hit and high quality singing talent.

The story joins Bobby (Alex Beaumont) and Laura (Elizabeth Carter), the couple who have enjoyed a smash hit with their first song Dreamboats and Petticoats, as their career (and relationship) falls quickly into the doldrums following only their third song release and a mammoth technical failure which reveals them to be miming on television.  In the aftermath of this Bobby decides to rejoin his previous group The Conquests, managed by hairdresser Ray (David Luke) who also happens to be Laura’s brother.  Throw into the equation Ray’s relationship with Donna (played by the hugely impressive Anna Campkin) and expectant couple Norman (Alistair Hill), who decides to also join the band and Sue (Louise Olley), a case of song theft and a slightly devious but highly supportive producer Tony (Alan Howell) and The Conquests’ quest for a recording contract and that’s pretty much the plot.  Will Bobby and Laura get back together?  Will the Conquests hit the heady heights of that other band who they don’t think will make it (yes, The Beatles)?  Will Ray and Donna stay together despite Ray’s seeming lack of interest and emphasis on the band and his hairdressing business?

Well, this is certainly a feel good musical, so you can likely guess the answers to the questions above.  And it’s also an excuse to have a great time, to sit back, relax and enjoy some great music, some great songs, performed particularly well, with some very humorous moments interjected into the evening. 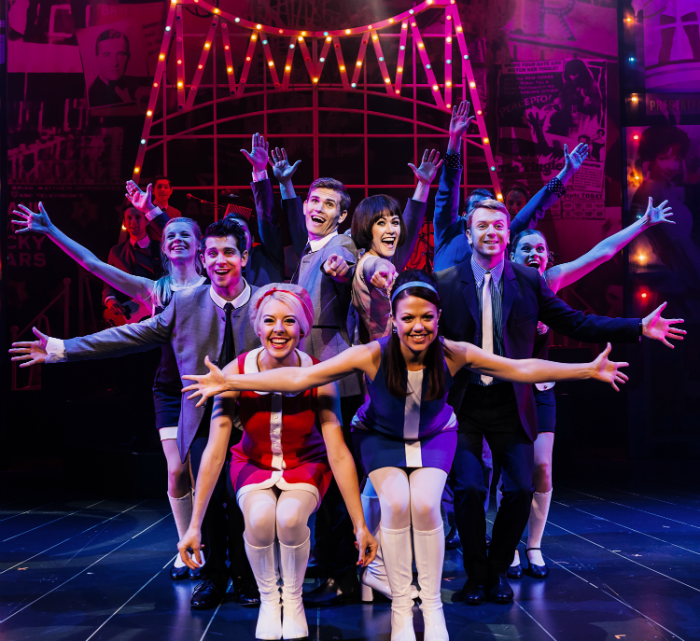 From the opening A Picture of You through to the final track When You’re Young and in Love, the song choice and performances are excellent.  Particularly strong in the first Act are Hello Stranger and I Only Want To Be With You, lead by the outstanding Anna Campkin, as well as Twist and Shout and A Lover’s Concerto (Anna Campkin, Elizabeth Carter and Louise Olley) whilst Alan Howell as Tony is excellent in performing The House of the Rising Sun.

But it’s in the second Act, when it’s particularly ramped up with excellent renditions of You Don’t Own Me (Elizabeth Carter), Oh Pretty Woman (Alastair Hill) and the hugely entertaining and riproaring Hippy Hippy Shake (also Alastair Hill).  It’s a set which has the audience clapping and cheering merrilly away, enjoying every moment.

The band are also on top form, leading the way musically, driving the songs forward and showing delicacy and poise during the slower numbers.

Against a background of 60s advertising and memorabilia, from adverts for Pepsodent and Ricicles to posters for Carry On movies, The Shadows and Everine, and donning spot-on 60s fashion, the company takes the audience on an entertaining and nostalgic trip, guaranteed to bring a smile to their faces.

Dreamboats and Miniskirts is performed at The Palace Theatre until Saturday 25 April 2015.