In Review: Ben Williams – Put It On Ice 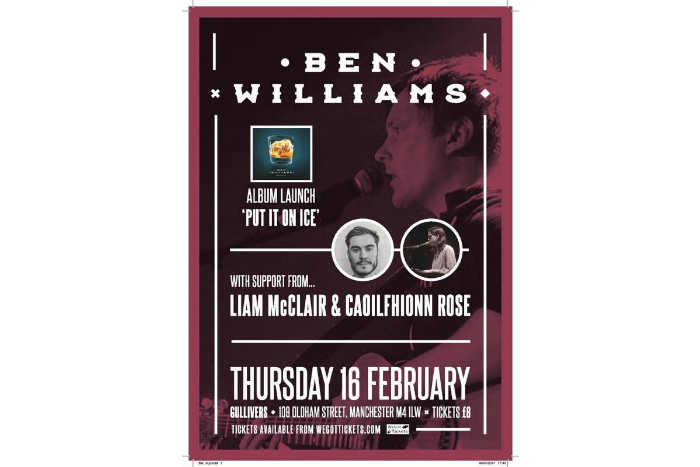 We’ve been catching the hugely talented Ben Williams perform at every opportunity over the last few years and were delighted when he revealed a little while ago that he was in the process of recording his second album, the follow-up to 2015’s Who Do You Think You Are?

Ben Williams’ new album, Put It On Ice, is set to be released on 3 February with an album launch at Manchester’s Gullivers on 16 February.  Suffice it to say the fourteen track piece is an excellent follow-up, truly a delight.

As a songwriter, Ben Williams has mastered the craft of penning tracks which have you singing along in no time but also strike a chord with the listener (I’ve lost count of how many times I’ve mentally quoted the lyrics to Foolish!).

As catchy as it may be, this is an album which also has depth, musically and lyrically. It seems impossible to categorize the album in some ways – you can pick out folk, blues, jazz, country and funk, with an occasional vintage feel, whilst instrumentally brass, strings, harmonica and even the spoons make an appearance.  There are beautiful touches which reveal themselves throughout – the bass line and harmonica solo throughout Put It On Ice are excellent driving forces, the strings on The Mist On Morecambe Bay amplify the atmosphere of the song perfectly, and the piano accompaniment to February Fools is stunning.

There are strong turns of pace and mood throughout the album, as upbeat songs such as Deadline and the excellent title track Put It On Ice give way to the likes of the outstanding and hauntingly beautiful Another Minute and the laid back You Got Me.

Lyrically, Put It On Ice is excellent – reflective, witty, occasionally self-critical and frequently optimistic.  Bob Dylan and Bodybuilding  highlight a strong sense of humour, whilst he is comfortable delving into the more melancholy with Number One Rule.

Put It On Ice will have you listening over and over again.

Ben Williams’ excellent new album Put It On Ice is out 3 February.

Ben Williams performs at Gullivers on 16 February 2017 – tickets are available at https://www.wegottickets.com/event/387155