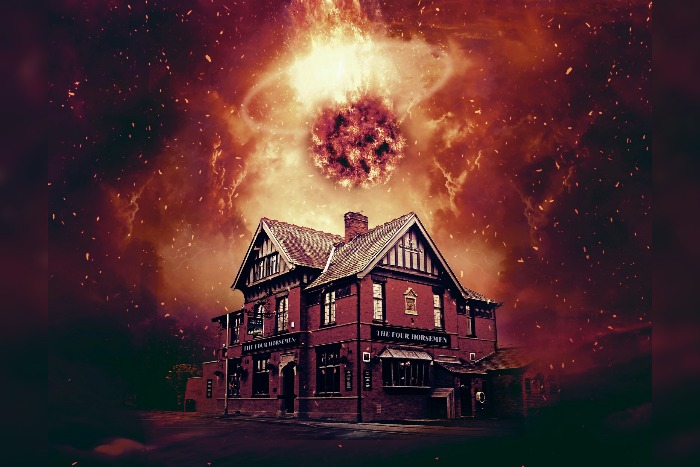 With the award winning Box of Tricks theatre company recently confirming plans for a UK tour of their latest production, casting has now been announced.

The Last Quiz Night on Earth, a new play by Alison Carr, will run at Manchester’s Hope Mill Theatre and at The Welcome Inn, Salford, in February.  Other dates in the North West include The Two Tubs (Bury), Bank Top Tavern (Oldham) and Cheshire Rural Touring Arts.

Box of Tricks have now confirmed casting for the play which will be staged in urban and rural venues across the country including theatres, village halls, community arts centres and local pubs.

Pub Landlady Kathy will be played by Meriel Scholfield; Meriel trained at RADA and is a regular on TV with appearances in all the major soaps including Coronation Street, fans may recognise her from numerous appearances on the famous cobbles, she has also appeared in Last Tango in Halifax, Holby City and Doctors.

Shaban Dar takes the role of ‘host with the most’, pre-apocalyptic Quizmaster Rav. Shaban is a familiar face in theatre with credits including I Believe in Unicorns (Theatre Alibi),  Peggin Out (Unheard Theatre) and Brink (Royal Exchange Theatre).

Unexpected guests Bobby and Fran played by Chris Jack and Amy Drake bring plenty of drama to the piece when they arrive at the quiz with some unresolved business.

Amy Drake’s TV credits include Cold Feet, Hollyoaks and Emmerdale. In theatre Amy has appeared in several productions including A Christmas Carol (Theatr Clwyd) and My Mother Said I Never Should (Theatre by the Lake)

The cast of four will embark upon a UK tour throughout Spring 2020 –connecting with audiences in the heart of local communities.

What is The Last Quiz Night On Earth About?

It’s the final countdown. Landlady Kathy invites audiences to the last quiz night on earth with Quizmaster Rav. He’s the host with the most. But with time ticking, some unexpected guests turn up out of the blue. Bobby wants to settle old scores, and Fran wants one last shot at love. Expect the unexpected to the bitter end and plenty of drama as the show gets quizzical!

The Last Quiz Night on Earth, breaks the fourth wall, plunging audiences in to the drama of the show.

The Last Quiz Night on Earth is written by Alison Carr, directed by Hannah Tyrrell-Pinder, associate producer is Max Emmerson, with design by Katie Scott.

When does The Last Quiz Night On Earth run in the North West?