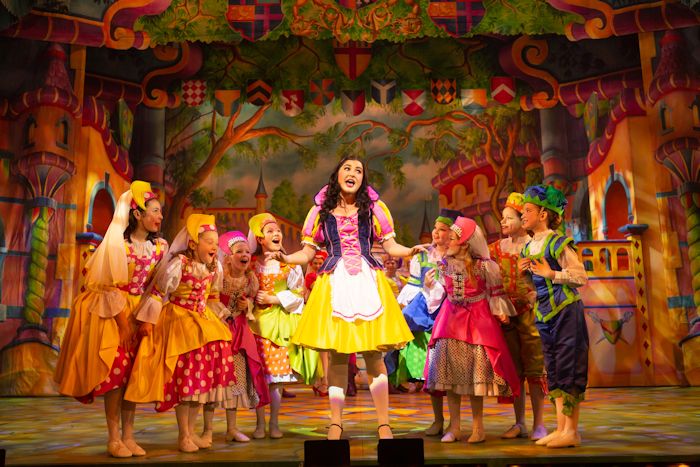 Is a pantomime for kids or for adults? Snow White at Manchester Opera House proved that it’s absolutely … for both!

As we arrive at Manchester Opera House for Snow White there are plenty of families there, kids with their parents, grandparents and friends.  And also quite a number of adult couples.  It all makes sense though as Snow White delivers plenty for all age groups.

Snow White is set against a series of beautiful backdrops, carefully and ornately designed and helping to create a magical and enchanting setting. Then with a flash, bang and chorus of music it opens.

Coupled with some truly magnificent outfits, in particular Dame Nora Crumble’s spectacular dresses including one shaped like a cupcake, it’s clear that a lot of effort and careful preparation has gone into the production.

From the outset the musical accompaniment is on point, and whilst the occasional song delivery isn’t quite perfect, each performer carries their vocal responsibilities admirably as they deliver reworded versions of hits including Can’t Take My Eyes Off Of You, One Way Or Another and You Lift Me Up.

The ensemble dancers are spot on throughout, performing with enthusiasm and precision.  And for a few numbers they are joined by children from The Stalder Academy of Dance in Sale who perform admirably.

But Snow White and the Seven Dwarfs at Manchester Opera House will be remembered for the comedy it brings.

From the seven Mancunian dwarfs, with thick accents delivering their lines filled with local slang and phrases through to the over the top performances of Craig Revel Horwood, Eric Potts and Ben Nickless, it delivers laughs throughout.

There’s slapstick, hilarity, moments for the children and a whole series of risqué double-entendres as we follow Snow White and Prince Harry’s journey to happily ever after despite the best efforts of Queen Lucretia to sabotage the relationship, kill Snow White and steal Harry for herself.

The interplay between Craig Revel Horwood, Eric Potts and Ben Nickless is outstanding.  The three of them (later joined by Joshua St Claire as Prince Harry) are comedy gold.  They play off each other, frequently attempt to put each other off, and bring constant laughs to proceedings.  It’s difficult to pick out the stand out scenes, but their delivery of an epic The Twelve Days of Christmas and ever growing tongue twister surely must be up there in a production seemingly designed to catch them out, filled with trickery and scope for dialogue disasters.  And whilst some of the ‘mistakes’ are deliberate, many appear not to be – and when they do trip up, they respond with humour, quick wit and were met with  cheers from the audience.

The jokes come thick and fast, moving from the kid friendly (tongue twisters, jokes about diahorrea and farting) through to the more adult (Boris Johnson, Donald Trump and Prince Andrew bear the brunt of some topical humour whilst there are many near the knuckle moments featuring references to Canal Street, gender and sexuality).  In fact there are times when the stars of the show, clearly have to recompose themselves before carrying on.

And it’s a hit.  Even clear fillers which add nothing to the story and are used to delay proceedings for costume and stage changes are winners, keeping the laughs coming and doing nothing to stop the momentum of the show.

By the end of the production the audience is cheering wildly for Nora Crumble and Muddles and booing Queen Lucretia heartily – and you can see the delight on Craig Revel Horwood’s face as they do – he is clearly having the time of his life on stage as are the audience off stage.