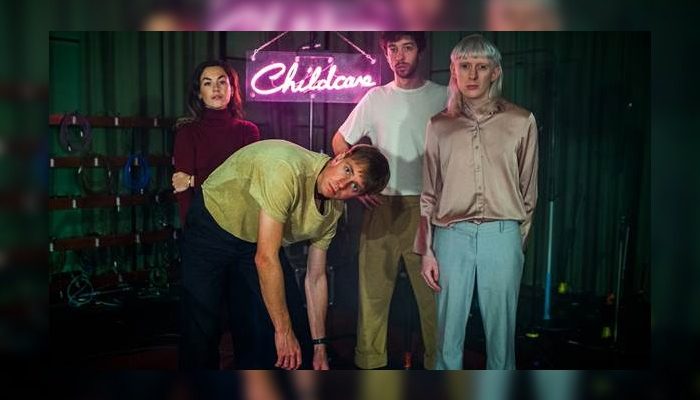 Childcare have announced The Fare Well Tour which comes to Manchester’s Deaf Institute in April 2020.

Childcare would like to invite all those seeking a better life to attend one of their infamous Get Well Soon events at venues across the country this April. The Fare Well Tour will be the last opportunity for participants to achieve Personal Glory™ through positive affirmations, mindfulness meditations and tantric teasing of their material, including tracks from the groups acclaimed debut album Wabi-Sabi.

The group were formed by Ed Cares, formerly one of west London’s most in-demand male nannies. Ed enlisted local musicians Emma Topolski (bass/vocals), Rich Le Gate (guitar) and David Dyson (drums) to complete the group and they performed their first shows together at Reading and Leeds festival in 2016. Their skewed, off-centre, softcore psych has gained them eager fans across the continent, extensive BBC Radio 1 and 6 Music support and wide-spread online coverage from the likes of The Line of Best Fit, Wonderland, Clash, DIY and Indie shuffle to name but a few.

When do Childcare headline at Manchester’s Deaf Institute?

Childcare headline at the Deaf Institute, Manchester, on 2 April 2020.