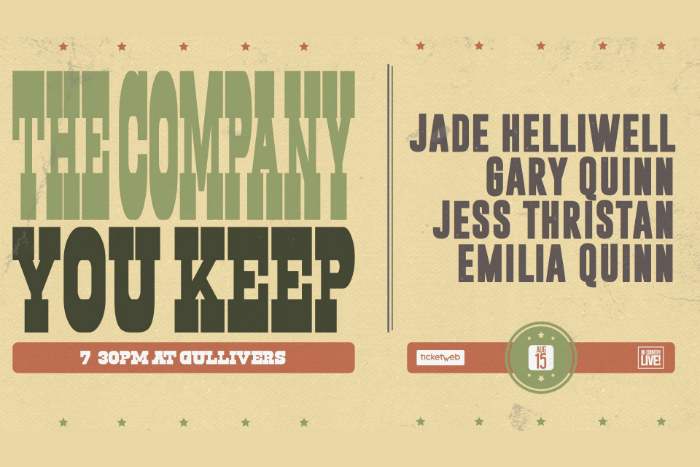 A new country music night comes to Gullivers on Thursday courtesy of UK Country Live.  The Company You Keep is all about bringing great artists and the country family together to celebrate the genre.

So, who’s playing at the first The Company You Keep night at Gullivers?

West Yorkshire born singer-songwrtier Jade Helliwell is best known for her British blend of pop and country, with influences ranging from Patsy Cline and Dolly Parton through to Taylor Swift, Maren Morris and Kelsea Ballerini.

Over the last couple years, she has performed alongside some of the biggest names on the country music scene, appearing regularly at festivals such as Country to Country (C2C), Buckle and Boots, FSA Festival, and Country on the Clyde. More recently she has the opportunity to open for Sam Palladio and Frankie Davis at the prestigious Nashville Meets London festival, in Canary Wharf.

Jade’s 2016 EP Forget The Night went straight in to the number 2 spot on the UK country charts, hitting the Top 50 in the official UK album charts, meeting with strong press and radio support.  The EP re-entered the charts in 2017, reaching the number one spot in the country charts and number 8 spot in the official charts when a video of her singing with a busker on a night out in Leeds went viral.

2018 saw her release another EP, Infactuation, preceeded by the single Drive and saw her wit Best Song at the 2018 BCMA Awards for Boom Tick and Best Female at the awards fo rhte second year running.

After touring Australia earlier this year, Jade released her new single Stormchasein March to coincide with her performance at the huge Country2Country musical festival.

A 5 time British Country Music Asssociation Awards winner including most recently retaining the ‘Male Vocalist of the Year’ award for 2017 and previously ‘UK Songwriter of the Year’ and consecutive ‘Song of the Year’ honours, Northern Irishman Gary Quinn has become one of British country music’s more established performers. Quinn cites U.S. country artists such as Garth Brooks and Brad Paisley as influences, while he has shared the stage with acts such as Phil Vassar, Kristian Bush and hall of fame songwriter Bob DiPiero. An accomplished performer, Quinn is just as comfortable with a pen in his hand and has recently collaborated with Grand Ole Opry member and Grammy winner Steve Wariner as well as Benita Hill (Garth Brooks) and David C Banning (Joey & Rory, Chris Cagle).

Having garnered international praise and an array of awards for his eponymous debut self-titled album, Gary teased the release of his new body of work with the single ‘Shame’ that was premiered by The Boot.com earlier this year and went on to debut at no.7 in the UK iTunes country chart. ‘Shame’ set the tone for the multi-award winner’s most personally insightful release entitled ‘I Remember’ which debuted at no.5 in the UK iTunes country chart. Quinn’s work stills sees regular radio airplay on the BBC and many of the top country stations in the UK and around the world including Chris Country, Nixa Country and 2Country Radio.  Gary Quinn also recently released the single Bumpin’ Into You.

Hotly tipped Jess Thristan is no stranger to Manchester audiences who’ve seen her perform at numerous shows including the weekly songwriter’s round Get A Round In.

After releasing her debut album This Is Home in September 2017, Jess has been working with writers and producers up and down the country getting ready for her second album. She is becoming a regular on the live music scene in London, further establishing herself as ‘one to watch’ in the British Country Music scene.

Having grown up with a wide variety of music genres, she takes inspiration from anywhere and everywhere. She kicked her performance career off as a Singer-Songwriter at age 11 and swiftly joined a Rock band. After returning briefly to her Singer-Songwriter career she formed a Blues Rock band and found her feet in Roots music. This led her to Americana, where she found a comfortable space and placed her unique twist on the ever shifting genre.

Emilia, being a multi-instrumentalist, plays the majority of the parts on her records as well as working with some great session musicians and friends. Her wide influences and knowledge of multiple instruments allows her to write in a very personal and identifiable way. She draws inspiration from her life experiences and lives through her songs, in an effort to make a personal connection with her audience through raw emotion.

When does The Company You Keep run at Gullivers?

The Company You Keep takes place at Gullivers on 15 August 2019 at 7.30pm presented by UK Country Live!