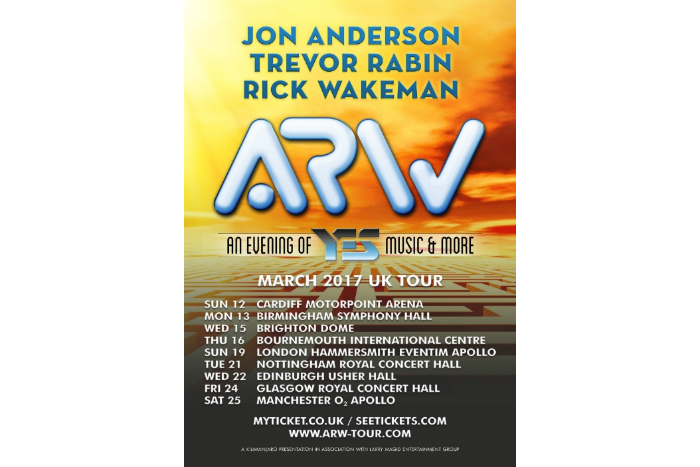 After a hiatus of 25 years, the YES line-up of Jon Anderson, Trevor Rabin and Rick Wakeman have return to form ARW (Anderson, Rabin and Wakeman) and have announced a run of tour dates for March 2017, stopping off at Manchester’s O2 Apollo.

Since they last played together in 1990 on the highly successful YES ‘Union Tour’, there have been various hybrid versions of the band. However, none featured the iconic voice of Jon Anderson, the outstanding guitar talent of Trevor Rabin, and the keyboard wizardry of Rick Wakeman. The aim of the band will be to restore the standard of excellence in performance that they established with their 1990 shows – which saw YES members past and present come together for the first (and only) time of the legendary band’s career.

“To be able to sing and perform with Rick and Trevor at this time in my life is a treasure beyond words,” explains Jon. “I’m so excited to create new music and revisit some of the classic work we created many years ago, it’s going to be a musical adventure on so many new levels.”

“Trevor and I have wanted to play Yes music together since the Union Tour,” adds Rick. “And as for so many of us, there is no Yes music without Jon. The ‘Holy Trinity of Yes’ is for me, very much a dream come true.”

Tickets for ARW performing at Manchester Apollo on 25 March 2017 go on sale at 10am on Friday 24 June.