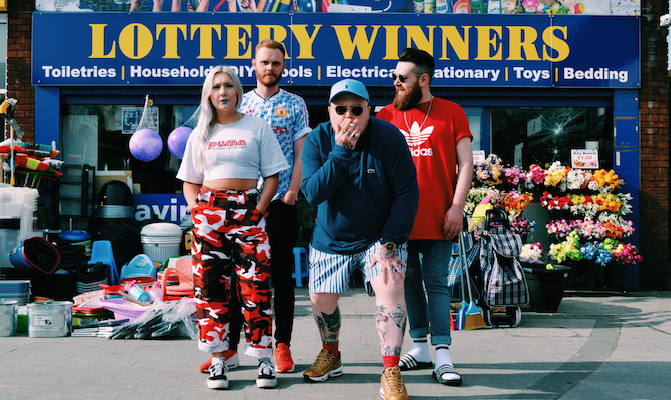 The Lottery Winners have announced that they will be supporting Larkins at their Manchester Albert Hall and Brudenell Social Club shows.

The date comes after the Manchester guitar pop legends appeared on BBC 6 Music and BBC Introducing Lancashire to discuss their upcoming debut album and showcase tracks from the upcoming release.

Having opened for the likes of Catfish and the Bottlemen, Blossoms, Tom Odell, The Charlatans, Sleeper, Clean Cut Kid, We Are Scientists, Paul Heaton and more, The Lottery Winners have been making waves on the live circuit for some time.  They’ve sold out their own tours and made huge impacts on festival stages.

The Lottery Winners’ spent much of 2018 at Abbey Road and Rockfield recording the debut album.

Larkins will be headlining at Manchester’s Albert Hall as they complete their biggest run of headline gigs to date.  The dates come after the band’s recent reveal of new single TV Dream.  The track was, explains frontman Josh Noble, inspired by his grandparents and thoughts on romance.  As he explains, “TV Dream was inspired by my grandparents; the idea that romance and dancing has lost its appeal and vigour from what it used to be. Instead, when we turn on the TV we see these visions of gender inequality, and blaming sexism on the way people dress. I loved combining such a blissful story of romance with a more serious tone of being influenced by the modern media.”

When do Larkins and The Lottery Winners perform at Manchester Albert Hall?

Larkins and The Lottery Winners perform at Manchester Albert Hall on 2 March 2019.