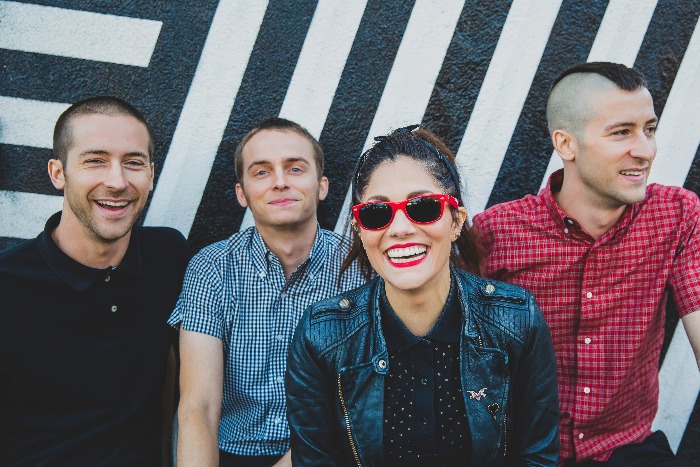 After releasing their third album in 2018, LA Ska-punk band The Interrupters headline at Manchester’s O2 Ritz on Sunday.

Fight The Good Fight, The Interrupter’s 2018 release, was named after a piece of graffiti spray-painted outside the studio where the band recorded their debut.  “It’s a phrase that’s followed us around for years, and it kind of embodies the message of this album” explains guitarist Kevin Bivona, with singer Aimee Interrupter adding, “There’s a lot of darkness in the world right now, but we’re trying to drive that out by making our music the light.  We’re fighting through everything with a smile on our faces.”

“Music’s gotten me through the toughest times in my life, so now my mission is to give back what I’ve been given—to help other people know that if they feel defeated or not good enough, they’re not alone” she continues.

Formed in 2011, The Interrupters got together soon after the Bivona brothers’ (guitarist Kevin, bassist Justin and drummer Jesse) former band appeared on bills with Aimee during a 2009 tour.  The band dropped their debut in 2014, soon after sharing stages with the likes of Blink 182, Bad Religion and Rancid.  In support of follow-on album, 2015’s Say It Out Loud, they toured the world headlining their own shows and supporting Green Day in Europe, Australia and South America.

Fight The Good Fight saw the band working with Rancid frontman and Grammy Award-winning producer Tim Armstrong and Grammy Award-winning mixer Tom Lord-Alge, channelling the raw energy of the feelings alluded to by Aimee in to a two-twone-inspired, melodic, punk fueled sound which they recorded almost entirely to tape.  “There’s a certain feeling you get from that process that you can’t really get digitally,” says Kevin. “There’s no overthinking anything—everyone’s got to be fully present and committed. It was definitely high-pressure, but also really fun.”

When do The Interrupters headline at Manchester’s O2 Ritz?

The Interrupters headline at the O2 Ritz, Manchester, on 2 February 2020.