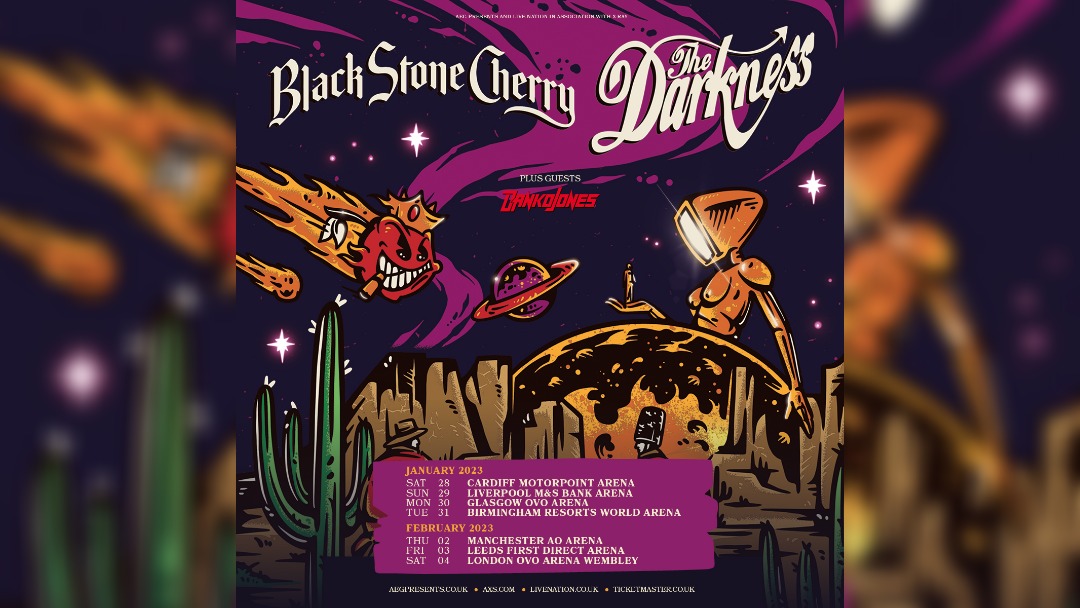 The Darkness and Black Stone Cherry have announced a string of co-headline arena dates.  The run includes a Manchester gig at the AO Arena and Liverpool gig at the M&S Bank Arena.

The two heavyweight bands will be performing seven arena shows around the UK including London’s OVO Arena Wembley.

Justin Hawkins said of the tour, “Legend tells of a night, some ten or more years ago, upon which The Darkness and Black Stone Cherry serenaded the nocturnal creatures of Thetford Forest, receiving generally favourable reviews in the woodland press. Like the owls and squirrels of that fabled evening, we give to you an opportunity to stand beaks and mouths a-gape in awe and wonder at the awesome power of power chords played by the very same fingers, but within the convenient shelter of an arena instead of in a moon-dappled forest clearing. There may be some seating so you won’t have to sit on toadstools. Also, modern flushing toilet facilities, not just tree trunks and bushes. Remember what the Thetford fauna say – “The music of Black Stone Cherry and The Darkness is TREEmendous, and Never LEAVES you.”

Whilst Black Stone Cherry added, “The rock n’ roll history books will tell you that on a summer’s night in 2012, tucked way back in the English countryside, two bands, from different parts of the world, came together to bring people a night of high energy, pedal to the metal, in your face unscripted rock ‘n’ roll.  A bond was formed that could only have been blessed by the wizards of said forest.  While discussing each other’s outfits and stage moves, a tour was spoken of, put into the galaxy if you will, and now we are honored to say the stars have finally aligned and we will be joining forces with The Darkness for what will be the UK’s most exciting tour of the season!  We absolutely cannot wait to create more magic and release the lightning that both bands caught in a bottle so many years ago.  Grab your friends, grab your family, but hold on to your asses because this tour is going to ROCK!”

When do The Darkness and Black Stone Cherry headline at Manchester’s AO Arena?

When do tickets go on sale for The Darkness and Black Stone Cherry’s co-headline tour?

Tickets for The Darkness and Black Stone Cherry’s co-headline tour go on sale at 10am on Friday 24 June.