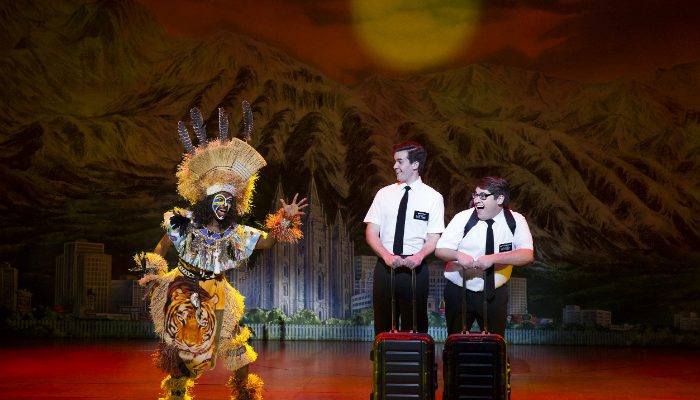 Due to incredible demand, ahead of opening its run at Manchester’s Palace Theatre, The Book of Mormon is extending its season at the venue.

The Tony, Olivier and Grammy Award winning show opens at Manchester’s Palace Theatre on 6 June.  It will now run until Saturday 10 August.

The cast of The Book of Mormon in Manchester will be led by Kevin Clay as Elder Price and Conner Peirson as Elder Cunningham, recreating their roles from the Broadway and US touring productions. They are joined by Nicole-LilyBaisden as Nabulungi, William Hawksworth as Elder McKinley, Ewen Cummins as Mafala Hatimbi, Johnathan Tweedie as Joseph Smith and Thomas Vernal as the General.

The Book of Mormon follows a pair of Mormon boys sent on a mission to a place that’s a long way from their home in Salt Lake City.

Since making its world premiere in March 2011 at New York’s Eugene O’Neill Theatre, where it won nine Tony Awards, including Best Musical, The Book of Mormon has been performed on three continents and won over thirty international awards. The musical has smashed long-standing box office records in New York, London, Melbourne, Sydney and cities across the U.S.

When does The Book of Mormon run at Manchester’s Palace Theatre?

The Book of Mormon runs at the Palace Theatre Manchester from 6 June until 10 August 2019.