The Manchester Garden to debut at RHS Chelsea Flower Show 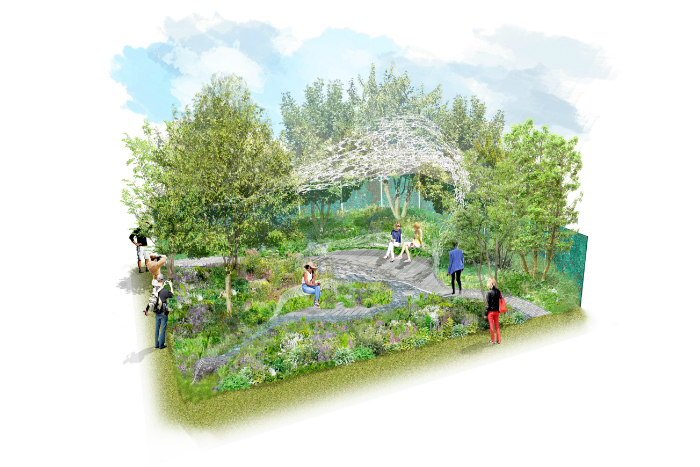 The Manchester Garden will debut at the RHS Chelsea Flower Show 2019 later this month as it seeks to challenge perceptions of the region.

The Manchester Garden has been designed by Exterior Architecture and will exhibit in the Space to Grow category.  The garden will highlight the reinvention of Greater Manchester, its adaptability and resilience.  Funding has been raised through project partners and private investment.

The Manchester Garden will feature ten trees to represent the ten boroughs of Greater Manchester; a water feature telling the story of the region’s major waterways; and a paved area created with local sandstone.

There will also be a focal sculpture by Denton-based studio Lazerian.  Created by artist Liam Hopkins, the seven-metre 3D design will showcase the region’s journey from one-time ‘cottonpolis’ to the home of graphene by referencing the structural similarities of both materials.

Speaking about the garden, Marketing Manchester managing director Sheona Southern commented, “This is an ambitious project that will allow us to promote the city to an entirely new audience and demographic.

“It will give us a platform to start a vital conversation about green spaces and Greater Manchester’s green infrastructure strategy – and with European’s biggest garden project coming to Salford next summer through the phase one completion of RHS Bridgewater Garden, 2019 felt like the right time to make our debut at the Show.

“The Show creates over 14 hours of prime-time television, two hours per evening throughout the week, and we aim to make the most of this to get Greater Manchester’s message out to the millions of viewers.

“We have been working closely with the BBC ahead of the Show to make a short film about Greater Manchester that will be used to introduce the Manchester Garden during the live broadcast. We are very excited to see how the film turns out, as well the opportunity on the live show to talk about how the city-region has evolved in recent years.”