14 Manchester singers chosen to perform in Jerry Springer – The Opera 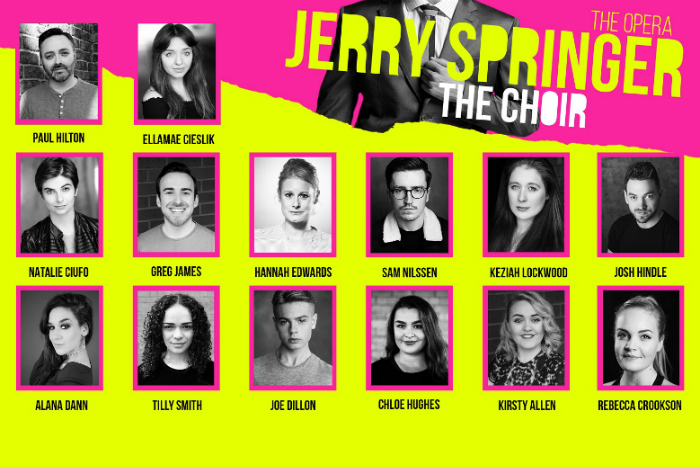 A group of 14 singers from across Manchester have won roles in the Jerry Choir in a new production of Jerry Springer – The Opera.

Jerry Spring – The Opera comes to Manchester in August 2019, almost 15 years since the last show was performed in the UK.  The production will run at Hope Mill Theatre, Ancoats, for four weeks.

The controversial musical is being brought to the stage by new production company Northern Ricochet, recently formed by James Baker (Parade, Yank), Tom Chester (Parade, Mamma Mia), and Bill Elms (Epstein: The Man Who Made The Beatles, The Ruby Slippers and Twopence To Cross The Mersey).

By holding an open call in the search for Jerry Choir members, Northern Ricochet’s aim is to make theatre more accessible; giving local community and wider region an opportunity to be a part of professional productions. All the performers in the Jerry Choir live in the North West region.

And now, the group of 14 singers have got through the auditions to form the Jerry Choir.  The choir will play an instrumental role in the show by supporting the cast of professional actors.

Jerry Springer – The Opera was written by Richard Thomas, who also wrote the music and lyrics, with the book and additional lyrics by Stewart Lee and Richard Thomas. It is based on The Jerry Springer Show, which was first broadcast on television in 1991 and was on the air for 27 years. It tells the story of America’s favourite talk show host who suffers the worst day in his career when faced with some of the most challenging guests he’s ever met on set.

The production caused a storm when it came to the UK stage in 2002.

The first joint venture from Northern Ricochet will see James Baker as director; Tom Chester as musical director; and Bill Elms as co-producer of Jerry Springer – The Opera.

Co-producer Bill Elms commented: “It was a real pleasure and privilege to audition for the Jerry Choir. There is so much undiscovered Northern talent and it’s our vision to nurture and support those performers who need that step on the ladder.

“We have an exceptionally talented choir who will support the professional cast – and we’re all really looking forward to the next phase in developing the choir in rehearsals when we know they are really going to shine.”

When is Jerry Springer – The Opera performed at Hope Mill Theatre, Ancoats?