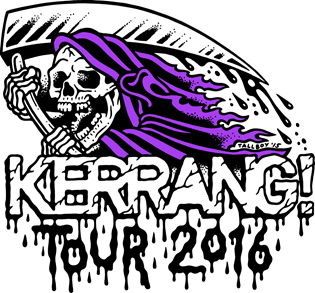 Sum 41 have been announced to headline the Kerrang! Tour 2016.

The announcement marks a return for the band who were forced to cancel their headline slot on the 2012 Kerrang! Tour when frontman Deryck Whibley injured his back.

The band, completed by Cone McCaslin (bass), Tom Thacker (guitar) and Dave Brownsound (guitars) – are all set to bring their avalanche of pop-punk anthems to UK venues in February 2016 on the Kerrang! Tour 2016, which will include a performance at Manchester’s Albert Hall on 18 February.

2016 also happens to be Sum 41’s 20th anniversary as a band, so what better way to celebrate with a UK tour and new music! The band have set up PledgeMusic campaign to make what has been described as their ‘best music yet’, easily sitting alongside classic anthems like the aforementioned In Too Deep, Motivation, Still Waiting and Fat Lip.

Obviously happy to be headlining the tour, frontman Deryck Whibley commented “We’re really excited to be back on tour. After a three-year break, we’re honoured that our first tour back is the Kerrang! Tour 2016 in the UK. We’ve been locked away in the studio making the new Sum 41 record, which we will be out later in the year [2016].”

Further guests are expected to be announced soon.

Tickets for the Kerrang! Tour 2016 stopping at Manchester’s Albert Hall on 18 February 2016 go on sale at 9am on Monday 5 October priced £18.50.  Presale from 2 October at www.kerrangtickets.co.uk

In Review: Of Mice And Men at Manchester Academy
In Review: Marmozets and Lonely The Brave at The Deaf Institute
In Review: The Courtesans at The Ruby Lounge