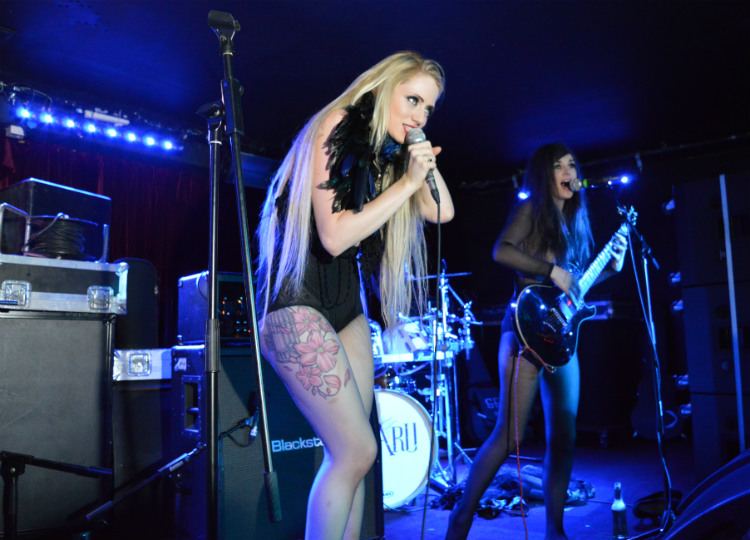 Sat backstage chatting with The Courtesans it became immediately apparent that this was a group brimming with confidence, a group which has belief in themselves, their music and what they are doing.  They also showed that they are a very tightknit foursome, laughing and joking and enjoying each other’s company.  Add to this a wicked and playful sense of humour – as guitarist Saffire Sanchez proved as the noise bellowed out from front stage at The Ruby Lounge, declaring ‘Nobody can hear you scream now’ followed by a wicked laugh.

Once on stage they proved that they have the ability to back this up, delivering an outstanding performance from the outset, showcasing their stunning debut album 1917 which is set for general release in September (everybody who is fortunate enough to have an advance copy courtesy of the successful Pledge Music campaign can already vouch for how good it is). 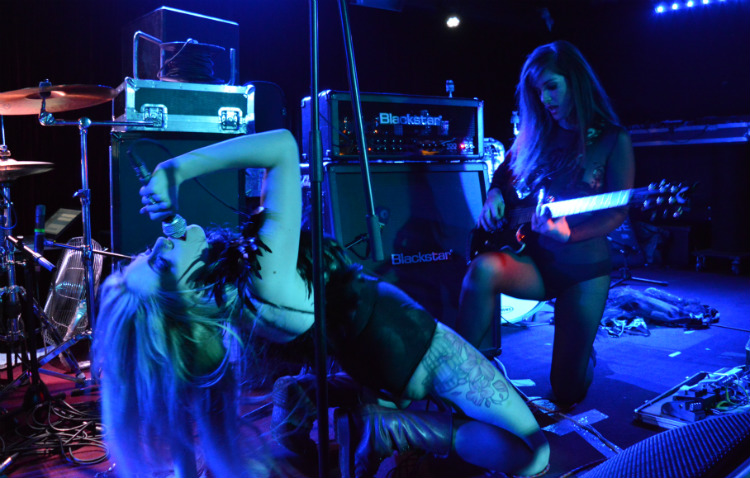 The Courtesans at The Ruby Lounge 15 August 2014

Opening up with the delightfully atmospheric Scream – a deep, dark and moody piece – the focus was instantly on the music.  And they excelled.  Singer Sinead La Bella’s stunning and sultry vocal delivery and stagecraft was matched by excellent guitar work and energy from Saffire Sanchez, with bass player Agnes Jones and drummer Vikki Brown expertly providing great purpose and drive.

Having seen The Courtesans variedly described as everything from electro-rockers and synth-rock  to dramatic rock and alt-shock-rock, they proved that they are multi-dimensional – pugnatious tracks such as Dirty Killer contrasting with more fluid pieces such as Hard Man To Kill, and Liberate varying between slow and atmospheric to up-tempo and slightly more agressive, all the while keeping the crowd entranced and fixated.  The beautiful melodies work perfectly with the dark, charged atmosphere which the music builds.  And the cross-genre influences of pop, trip-hop, metal, rock and even a touch of glam rock can be spotted.

The Courtesans are certainly decadent, dark and addictive and the crowd loved them.  Their stage presence (both individually and collectively) was immense, keeping the delighted throng transfixed throughout.

Their forthcoming single Genius (out 25th August) brought further cheers from the audience – a slow, dramatic, climactic piece that creates a deep and dark atmosphere.  As with the whole of their set, it was entrancing.

As The Courtesans made their way off stage at the end, suffice to say the crowd had delighted in what they had seen and raved about it to each other.

The Courtesans put on a stunning show – high quality pieces and well-crafted lyrics, performed to the highest standards with an onstage presence full of charisma and energy – practically hypnotic.

In Review: Fall Out Boy and The Pretty Reckless at The Phones 4u Arena